The plastic fuel tank can crack and leak gasoline, posing a risk of fire and injury.

Toro has received 882 additional reports of fuel tanks leaking. No fires or injuries have been reported. 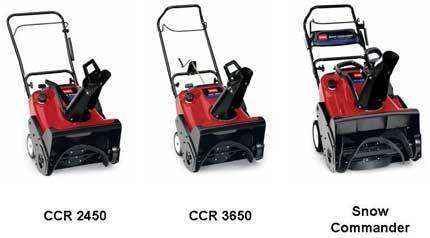 This recall now involves 2001 and 2002 Toro Snow Commander and CCR model snowthrowers listed below. The model and serial numbers are located on the rear of the axle plate between the wheels.

The units were sold by Toro dealers and Home Depot stores nationwide from September 2000 through March 2006.

Consumers should contact their local Toro Authorized Service Dealer to find out if their snowthrower is included in the recall. If necessary, the dealer will schedule a time and install a free replacement fuel tank.

Consumer Contact: For more information contact Toro at (800) 689-8671 between 7:30 a.m. and 7 p.m. CT Monday through Friday or 8 a.m. and 6 p.m. Saturday. Consumers also can visit the firm's Web site at www.toro.com. The Toro Company has notified registered owners directly.