Nutracoastal Trading LLC is recalling dietary supplements sold under the STEAM and S-DROL names after FDA analysis found the products contained ingredients that made them unapproved drugs.

S-DROL was found to contain desoxymethyltestosterone, a steroid, it an unapproved drug. The active drug ingredient is not listed on the product label. Samples of STEAM tested by the FDA contained sulfoaildenafil, an analog of sildenafil. Sildenafil is an active ingredient of an FDA-approved drug for erectile dysfunction (ED).

The undeclared ingredients may interact with nitrates found in some prescription drugs such as nitroglycerin and may lower blood pressure to dangerous levels. Consumers with diabetes, high blood pressure, high cholesterol, or heart disease often take nitrates. Additionally, the product may cause side effects, such as headaches and flushing.

Customers who have this product in their possession should stop using it immediately and contact their physician if they have experienced any problems that may be related to taking this product.

Any adverse events that may be related to the use of this product should be reported to the FDA's MedWatch Adverse Event Reporting program online [at www.fda.gov/MedWatch/report.htm] or by phone [1-800-FDA-1088].

Consumers should return any unused products to the retail location where they were purchased or contact Nutracoastal Trading LLC directly at 866-803-2434 Monday - Friday, 9 am to 5 pm EDT.

Fiesta is recalling about 88,000 Blue Ember gas grills. The hose of the gas tank can get too close to the firebox and be exposed to heat, posing a fire haz...

Fiesta is recalling about 88,000 Blue Ember gas grills. The hose of the gas tank can get too close to the firebox and be exposed to heat, posing a fire hazard to consumers.

Fiesta has received 161 reports of grill fires, resulting in nine injuries, including two incidents of major burns on different parts of the body, six incidents of minor burns, and an incident involving temporary hearing loss.

Consumers should immediately stop using the grill and call Fiesta Gas Grills to obtain a free replacement grease pan assembly and instructions for installing the part and the gas tank. The grill should not be used until the new grease pan assembly and the gas tank have been installed correctly. Consumers should also inspect the gas burner hose and regulator, which will be replaced free of charge if there are signs of damage. 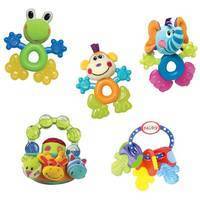 Luv N Care Ltd. of Monroe, La., is initiating a nationwide recall of gel-filled teethers with the brand names Nuby, Cottontails and Playschool, because the liquid inside the gel-filled teethers has been found to contain Bacillus subtilis and Bacillus circulans bacteria in the gel.

Although these bacteria generally do not cause illness in adults, infants and children with weakened immune systems can experience stomach pain, vomiting, diarrhea, and uncommonly more serious disease, if the teether becomes punctured and they ingest the liquid gel.

Consumers who have teethers with the brand names and UPC Codes listed below should immediately stop using them and discard or return them to the place of purchase for a full refund.

The recall includes the following products:

The firm recalled the products after learning that the FDA found Bacillus subtilis and Bacillus circulans in the gel in samples from two lots collected by the FDA.

No illnesses have been reported to date.

The company distributed the products through retail outlets nationwide. The products have also been found to be marketed on the Internet. The products are packaged in a plastic bubble on a printed card and can be identified by the UPC Codes listed above.

Adverse reactions experienced with the use of this product may be reported to the FDA's MedWatch Adverse Event Reporting program either online, by regular mail or by fax.

Thane International is recalling about 580,000 H20 mop steam cleaners. The power cord can unexpectedly wear down and expose the wiring, posing a shock and ...

Thane International is recalling about 580,000 H20 mop steam cleaners. The power cord can unexpectedly wear down and expose the wiring, posing a shock and burn hazard to consumers.

The H2O Mop is an electrically-powered appliance for cleaning a variety of floor surfaces that uses microfiber or disposable cloths on a cleaning head through which steam is dispersed. H2O Mops are white with a purple water tank with the "H20" and "M" symbol printed on the top of the cleaning head. The model numbers of affected units are 808.092 and OEM-TV-001. This recall only includes H2O Mops with the following reference numbers printed on the label on the back of the product: 200709198 to 200803148 or H20M1000 to M-H20M1198.

The mops, made in China, were sold directly to consumers by Thane through television infomercials; on the Web at www.thane.com; by QVC, through its televised shopping program; and by retailers nationwide from June 2007 through December 2008 for about $100.

For additional information, contact Thane anytime at (800) 485-0017 or visit the firm's Web site at www.h2omopservice.com.

Propac Distributing Corp. is recalling about 7,000 hooded sweatshirts. The sweatshirts have a drawstring through the hood which can pose a strangulation hazard to children.

This recall involves youth zipper and pullover hooded sweatshirts with drawstrings. The sweatshirts were sold in black, navy and grey. The Proclub brand sweatshirts have RN number 100418 is printed on a tag inside the collar.

The sweatshirts, made in China, were sold at retail stores in Los Angeles, Calif. and Las Vegas, Nevada from November 2008 through December 2008 for about $19.

For additional information, contact Propac Distributing at (888) 337-0011 between 9 a.m. and 5 p.m. PT Monday through Friday or visit the firm's Web site at www.proclubinc.com.

The play yards side rail can fail to latch properly and when a child pushes against the rail it can unlatch unexpectedly, posing a fall hazard to children. The firm has received 347 reports of sides of the play yard collapsing unexpectedly, resulting in 21 injuries to young children, including bumps, scrapes, bruises and one concussion.

The recall involves the Kolcraft Travelin Tot play yards, as well as other similar play yards manufactured for Carters, Sesame Street, Jeep, Contours, Care Bare and Eric Carle, with model numbers listed below. Some of the units have a bassinet and/or changing table. Some models have a mobile, vibrating unit or a parent organizer. Model numbers are printed on a white sticker on one of the feet of the play yard.

The play yards were sold at Babies R Us, Walmart, Kmart, Sears, Target and other stores nationwide and Internet retailers from January 2000 through January 2009 for between $50 and $160. They were made in China, Spain, and Italy.

Consumers should immediately stop using the play yard and contact Kolcraft for a free repair kit.

Some of the models of the play yards involved in this recall were recalled in September 2007 due to a strangulation hazard posed by the changing table, which resulted in the death of a 10-month child.

About 25,000 Ionic salt lamps are being recalled. The lamps overheat causing the vinyl coating on the cord to burst and melt, posing a fire hazard. There have been eight reports of overheating, including two reports of hand burns.

The recalled ionic salt lamp varies in color from light to dark red and is attached to a wood base. The lamp fixture comes with a 10 watt bulb and a black cord with an inline on/off switch. The UL file number E216832 will be printed on the cord and the UL file number E214389 on the plug.

The lamps were sold by LTD Commodities, ABC Distributing, and Lakeside Collection catalogs, and on their Web sites from March 2009 through May 2009 for about $12. They were made in Pakistan.

Consumers should immediately stop using the product and contact either LTD Commodities, ABC Distributing or Lakeside Collection to receive a replacement cord set. All consumers who purchased the Ionic Salt Lamps were notified directly about the recall.

July 2, 2009
Aqua-Leisure Industries Inc. is recalling about 4 million inflatable baby floats. The leg straps in the seat of the float can tear, causing children to unexpectedly fall into or under the water, posing a risk of drowning.

There have been 31 reports of float seats tearing, causing children to fall into or under the water. No injuries have been reported.

The recalled inflatable baby floats were sold in a variety of styles and colors. The names and model numbers are located on the packaging. A date between 08/02 and 07/08 is molded on the valves of recalled products. Products not included in the recall can be identified with the lettering "NP" molded on the valve. The following names and model numbers are included in this recall:

Intermatic Inc. is recalling about 240,000 in-wall electronic timers, models ST01 and EI600. The firm has received twelve reports of consumers receiving a ...

July 1, 2009
Intermatic Inc. is recalling about 240,000 in-wall electronic timers, models ST01 and EI600. When consumers try to replace the timers battery place a metal object through the battery tray slot, the object can reach internal metal contacts, posing a shock hazard to consumers.

The firm has received twelve reports of consumers receiving a minor shock while changing the timers battery. 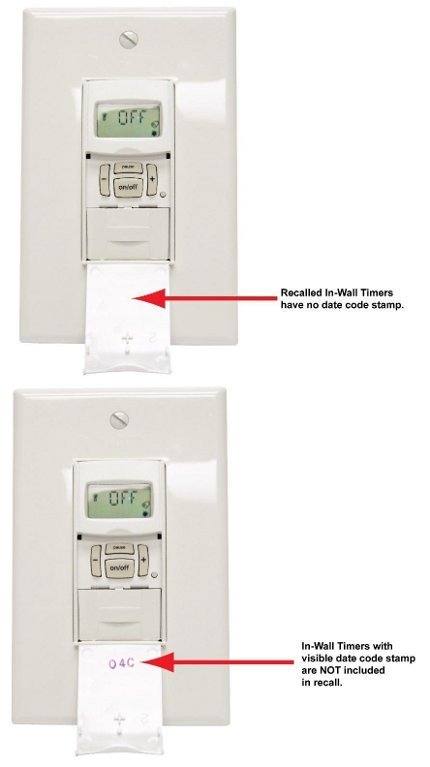 The timers, made in Mexico, were sold at retailers and electrical distributors nationwide from March 2007 through June 2009 for between $25 and $45.

For additional information, contact Intermatic toll-free at (877) 417-4316 anytime or on the firm's Web site -- .www.intermatic.com