Owners of certain Toyota Tundra vehicles are advised to remove spare tires mounted underneath the body of the vehicle. In an advisory, the National Highway Traffic Safety Administration says excessive corrosion due to "road salts" can cause the rear cross- member of the vehicle frame to fail and allow the spare tire to fall onto the roadway at any time, creating a road hazard for other vehicles.

Toyota has just announced a recall of these vehicles, but NHTSA recommends that owners remove the spare tires even before taking the vehicles to the dealers to be remedied.

In addition, the corrosion may also cause damage to the rear brake lines and lead to brake system failures.

Corrosion does not appear to be an anomaly with these trucks.

• Kenneth K. of Candia, N.H., writes ConsumerAffairs.com that his 2000 Toyota Tundra TRD 4x4 extended cab truck is "being eaten away by rust, causing parts to break and even fall off. Now the extensive frame rust has caused parts to fall off, and break."

• Thomas of Ronkonkoma, N.Y., owns a 2000 Toyota Tundra extended cab truck. He tells ConsumerAffairs.com, "The whole under side of the truck is rusting.I owned a 1968 Chevy that had less rust then this truck has."

Toyota also says it will notify owners of model year 2000 through 2003 Tundras registered outside of the recalled states and perform the same inspection and repair if the owners desire.

Until the recalled vehicles are brought in, NHTSA urges owners to remove the spare tires to prevent them from falling onto the roadway. NHTSA also advised to avoid being under the spare tire or rear cross-member while removing it. If the spare tire is moved to the truck bed or to another location in the vehicle, owners should make sure that it is properly secured.

November 24, 2009
Electrolux is recalling about 900 Electrolux ICON and Kenmore 30 PRO gas ranges. An incorrect part allows more fuel to pass to the range's oven than can be burned efficiently, causing incomplete combustion and the release of carbon monoxide. This poses a risk of carbon monoxide poisoning to consumers.

Electrolux has received four reports of incidents involving carbon monoxide being released from the recalled gas range. No injuries have been reported. 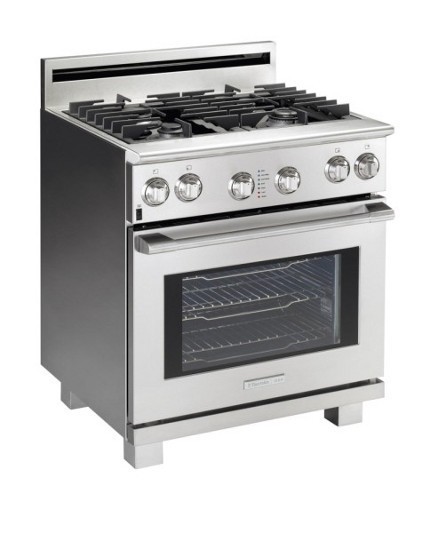 Consumers should immediately stop using the range's oven and contact Electrolux for the Electrolux ICON or Sears for the Kenmore PRO to schedule a free repair. Consumers can continue to use the cooktop (top burners) and the broiler as well as any clock and/or timer functions.

November 20, 2009
Evenflo is recalling some of its First Choice infant restraint systems because a label was left off. The label contains instructions about registering the child seat so that consumers can be notified if the seat is recalled, according to the National Highway Traffic Safety Administration (NHTSA).

Evenflo will mail the required labels along with placement instructions to registered owners free of charge. The safety campaign is expected to begin during November 2009. Owners may contact Evenflo toll-free at 1-800-233-5921 between 8am and 5pm EST.

November 18, 2009
Grand World is recalling more than 640,000 "Bobby Chupete" pacifiers because they fail to meet federal safety standards. The pacifier mouth guard is too small, posing a choking hazard to infants and toddlers.

This recall involves Bobby Chupete pacifiers. The pacifiers have a ring-shaped handle and heart-shaped mouth guard with two ventilation holes. The nipple is made of latex. Bobby Chupete and a picture of an infant are printed on the pacifiers packaging. The pacifier was sold in aqua, red, white or yellow colors.

The pacifiers, made in China, were sold at various retail stores nationwide from November 2004 through July 2009 for about $1.

Consumers should immediately take the recalled pacifiers away from infants and toddlers and contact Grand World for a refund or a replacement pacifier.

For additional information, call Grand World collect at (718) 326-7786 between 9 a.m. and 5 p.m. ET Monday through Friday or visit the firms Web site at www.grandworldinc.com.

November 5, 2009
About 282,000 Adventure Playsets are being recalled in the U.S. and Canada. The plastic coated lumber on the horizontal ladder (monkey bar/swing beam) can weaken over time due to rotting of the whitewood (spruce, pine and fir species), resulting in a fall hazard.

All recalled swing sets have a horizontal ladder that acts as both a monkey bar and swing beam, and an end latter coated with cranberry or green plastic. The replacement kit includes the horizontal ladder and the vertical end truss support pieces. More photos below.

Adventure Playsets has received more than 1,400 reports of rotting ladders involving 16 injuries that resulted in nine emergency room visits. The injuries include two arm fractures, lacerations, scrapes, and bruises to children younger than 8 years old. Most of the reported injuries occurred when the swing came out of the monkey bar/ swing beam that had rotted.

This recall involves wooden play sets with swings, slides and ladders. Each set has an overhead monkey bar ladder that acts as both the monkey bar and swing beam, and an end ladder coated with cranberry or green plastic. The instruction manual has the name 'Adventure Playsets' and one of the following model numbers printed on the cover.

The Bellevue,Tacoma and Durango swing sets were previously recalled due to detaching frames and a fall hazard.

The playsets, made in the U.S., were sold at Walmart, Toys R Us, Academy Sports, Menards, and Mill stores nationwide, and online at Walmart.com, ToyRUs.com, Willygoat.com and through the DMSI catalog from January 2004 through December 2007 for between $300 and $600.

For more information, contact Adventure Playsets toll-free at (877) 840-9068 between 8 a.m. and 5 p.m. CT Monday through Friday, or visit the firm's Web site at www.adventureplaysets.com. Consumers can also email the firm at custservice@adventureplaysets.com

This recall involves a children's art easel which has a chalkboard surface on one side and a white board surface on the other side. The item number is AA13301 and the UPC number is 082435133010 which can be found on the original packaging.

The easels, made in China, were sold at art supply stores nationwide and online from July 2004 through June 2009 for about $75.

Consumers should immediately take these recalled easels away from children and contact the firm to receive a free replacement chalkboard panel.

November 2, 2009
General Motors is recalling certain models because of a problem with plastic supply and return ports on the modular reservoir assembly. The ports may crack, possibly allowing fuel to leak and create a fire hazard.

The recall affects the following models that were sold in specific states:

Dealers will replace the fuel pump module free of charge. Special extended coverage will also apply to vehicles registered in other states where high temperatures are common.