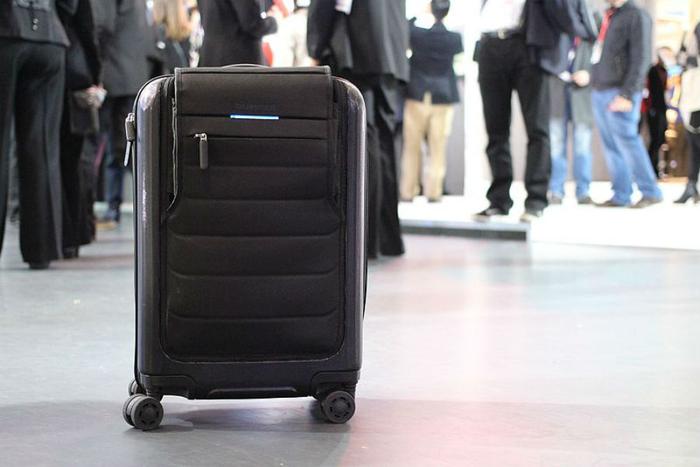 The impulse of tech start-ups to connect any and every object to your smartphone is beginning to blow up, both figuratively and literally. After Samsung admitted last year that its Galaxy Note smartphones had an occasional tendency to explode, airlines banned the phones and began scrutinizing other objects containing lithium-ion batteries.

The airline industry is now zeroing in on “smart” suitcases, or bags that promise to go above and beyond the normal duty of carrying your stuff. Beginning January 15, all major airline carriers plan to make passengers remove the batteries that power their bags before they clear security, essentially turning a $400 smart suitcase into an overpriced, regular suitcase. And if the batteries aren’t removable, then airlines won’t let the bag get anywhere near the plane.

Customers who love their smart bags can blame the Federal Aviation Administration. "The FAA has been very, very clear in its guidance to air carriers, that lithium-ion batteries stored in the cargo hold present an unacceptable risk,” FAA spokesman Gregory Martin tells ConsumerAffairs.

A slew of companies jumped on the “smart” bag trend several years ago. One company called Raden advertises that it is the only maker of suitcases with batteries that are removable -- allowing travelers to use the bags and remain in compliance next year.

Longtime suitcase maker Samsonite introduced its own GeoTracker line as well, though advertising does not indicate if that battery can be removed. Away Travel, which sells hard suitcases with built-in chargers, says in their advertising that “we don’t make ‘smart’ luggage, we make thoughtful luggage.”

Perhaps no company has received as much glowing press as BlueSmart, the company that claims to be the “World’s First Smart, Connected Carry-On” and launched with the help of 10,000 crowd-sourced investors in 2014.

Since then, BlueSmart and its pricey suitcases have been featured in publications like the New York Times -- atleastfourtimes. The company estimates that it has sold 65,000 bags.

There’s just one problem: the batteries in BlueSmart’s luggage cannot be removed, the company admits. Therefore, the bags cannot go on a plane. In statements on its website and to ConsumerAffairs, BlueSmart is trying to assure the public that they will get this turned around.

“DOT [the Department of Transportation] has already reviewed our products and all the technical documentation. The products passed all the necessary reviews and we are now waiting to get the formal letter of approval,” BlueSmart tells ConsumerAffairs in a statement.

But the FAA, the agency that regulates the airline industry, has no record of meeting with any particular smart suitcase company, according to agency spokesman Gregory Martin.

Told of this, BlueSmart says they met with people higher-up in the department.  “It wasn't the FAA that we met with. We went straight to the DOT. The FAA follow the guidelines of the DOT.” (As of publishing, BlueSmart could not name who in the DOT that they actually met with).

BlueSmart’s website similarly downplays the pending airline ban. “While most airlines understand and approve of smart luggage, others might still be getting up to speed,”  BlueSmart writes on its website. “To overcome this, we have organized meetings with the world’s leading airlines to make sure that your Bluesmart will be approved.”

Told of this, FAA spokesman Martin reiterates that his agency is strongly urging airlines to not allow lithium-ion batteries in the cargo hold. He also clarifies that the FAA is responsible for creating its own regulations.

"We're a part of the Department of Transportation, but the FAA sets the regulations that ensure aviation safety,” Martin says.

Batteries must be removed

Away Travel tells ConsumerAffairs that their batteries "are easily removable and therefore, fully compliant with the new airline regulations." Samsonite says that they have stopped selling their smart bags, but adds that the batteries in purchased bags are removable.

American American Airlines, Delta, Alaska Airlines, and Virgin Airlines say that all customers with smart bags “must be able to remove the battery in case the bag has to be checked at any point in the customer’s journey” beginning January 15. The International Air Transport Association, a trade group representing nineteen international airlines, followed suit, announcing the same policy to take effect next year.

Whether the smart luggage industry will adapt by making their batteries removable remains to be seen. But there are other reasons to re-think smart bag purchases, or at least to wait until the technology improves.

Customers reviewing BlueSmart’s application for Android on Google Play complain that the GPS-tracking app does not connect properly to their smartphone. BlueSmart responds that the application is getting improved and updated.

“As for Android, we are constantly working on updates,” the company writes. “We've redesigned the whole app experience and architecture for the iOS app and are constantly rolling out these updates across our Android app too.”