A coffee maker might make a good holiday gift. Then again ... 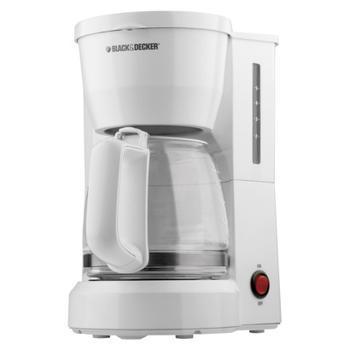 When it comes to coffee makers there seems to be a new one on the market every day.

There's single-cup coffee machines, programmable coffee machines and coffee makers that are too advanced for their own good and have a bunch of unnecessary buttons and features.

But even if a coffee maker is able to produce a cup of Joe, pour it and walk it to your bedroom, most people still just want a product that’s reliable, doesn’t break down immediately and is able make a good cup of coffee on a consistent basis.

Black & Decker is one of the older and better-known companies in the coffee machine business, and although the company is best known for its tools and handyman products, it’s also known for its array of coffee machines that are used by millions of people all around the globe.

Some of the B & D coffee machines on the market are the 12-Cup Switch Coffee Maker that goes for about $20 on the company’s website. Then there’s the Single Serve Coffee Maker, the Brew ‘n Go Personal Coffee Maker, the 5-cup coffee maker, which are all well under $100.

There’s also the SpaceMaker Thermal Coffee Maker for $79.99 that hangs above your kitchen counter and is pretty sleekly designed, but it was recalled earlier this year due to the glass breaking while in motion and spewing out hot coffee on people.

Despite some of the company’s coffee machine shortcomings, Black & Decker is still one of the go-to coffee makers on the market today, as reports indicate its machines are sold in over 100 countries around the world.

What's also fairly consistent in many parts of the world are the holidays, and here in the U.S. Black Friday is upon us, so we wanted to pull a few comments about Black and Decker coffee makers from our review section--as we know many consumers have thought of buying one for a family member, a friend or co-worker. But is that really a good idea?

Keith of North Carolina would probably advise against it, as he purchased a couple of B & D coffee makers as gifts, and also bought one for himself. It turns out that he wasn’t too pleased with how his maker performed.

“I bought three Black & Decker coffee makers, two as gifts and one for our home,” he wrote in his ConsumerAffairs post.

“The model number is CM1010B. As so many others have noted, you cannot pour a cup of coffee without spilling it all over the counter. The design of the spout on the carafe is the apparent problem. In addition, although less than a year old, one of the units quit working completely. This is obviously an on-going problem, and these units are still being sold at Wal-Mart,”  wrote Keith.

And he wasn't alone, Erin of Beaverton, Ore. also purchased a Black and Decker Coffee Maker as a holiday gift and said the low price of the machine wasn’t worth the hassles she had to endure.

“Stupid me for buying a 12-cup Black & Decker coffee maker,” she wrote.

“It turned out to be the most expensive cheap coffee maker. I bought it for Christmas and here in April, not only do we have a plastic chemical smell/taste in the coffee, but the carafe has always dribbled as other complainants have stated.”

“What’s worse, the chemical and plastic taste/smell is stronger now,” she added. “God only knows what carcinogenic chemicals we are leaching into our bodies. They probably made this in China from recycled computer plastic contaminated with heavy metals and other dangerous things. When will I learn that you always get what you pay for?”

Unlike Keith and Erin who purchased the coffee makers as gifts and ultimately regretted their purchase, there were also those readers who were on the receiving end of the makers as holiday gifts.

“We received a ‘brand new in the box’ coffee maker as a gift,” explained Gerald of Florida in his posting.

“We followed the instruction and poured in one cup of water, placed the cup under the spout and pressed the start switch. Shortly, the water began to boil and it spit out the top and onto my wife, burning her arm. ... After navigating the Black & decker phone maze, I reached a person named Mary who only cared about getting my name and email address, but was not interested in hearing about this dangerous product.

“She told me she was following company directive on this. I thought about giving it as a gift to a personal injury lawyer, but decided to offer B&D a chance to rectify the issue.” wrote Gerald.

We reached out to Black & Decker for a statement but hadn't received a response at the time this story was written.

For what it's worth, of the 245 reviews on our site as of this writing, most are way less than stellar, which is something to think about if you’re planning to purchase a coffee maker as a gift this holiday season.