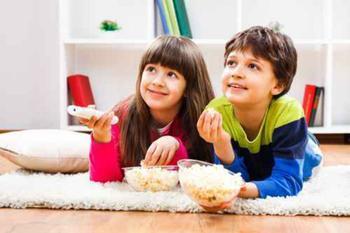 Many of us may have fond memories of plopping down in front of the TV as kids for Saturday morning cartoons. You may have even poured yourself a bowl of your favorite sugary cereal to enhance the experience, but how much did those early-morning commercials influence your breakfast choice?

A new study conducted by the University of Kansas Medical Center and University of Missouri-Kansas City has found that children’s food choices are influenced greatly by what they see on TV. In fact, the researchers say that advertising can actually alter children’s brain activity.

The study utilized 23 children between the ages of 8 and 14 who were asked to rank 60 food products based on how healthy and tasty they were. One group of participants was shown commercials for the food products while researchers used functional magnetic resonance imaging (fMRI) to look for changes in their brains.

The second group of participants followed a similar format, except they were shown non-food-related commercials. After the commercials ended, the researchers asked each participant if they wanted to eat a given food product.

The results of the experiment showed that the participants put much more stock in whether or not they would eat a product by how good it tasted. This factor was even more important for participants who watched food-related commercials; the fMRI scans revealed that these children had brain activity that was significantly more active in the ventromedial prefrontal cortex – the area of the brain associated with reward valuation.

The results of the study show just how much influence advertisers have over our children’s food choices. These professionals spend nearly $2 billion annually to create ads targeting children and adolescents, and experts say that young people view anywhere between 1,000 and 2,000 ads per year related to food products.

The full study has been published in The Journal of Pediatrics.