Should children get trophies whether they win or lose?

Some say many kids are being overly rewarded and other say constant prizes are okay. 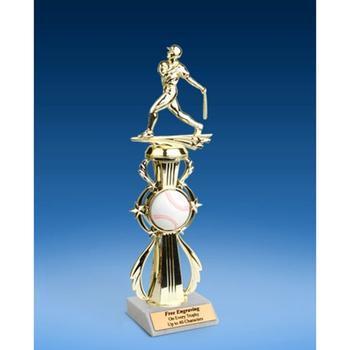 If you happen to be of a certain age and played sports while you were growing up, then you’ve probably noticed a slight change in the way coaches and leagues are doing things these days.

Many of us who played baseball, basketball, football, soccer or whatever learned early on how it felt to lose a competition and understood how to hold it together while the other team piled on top of each other in victory.

In fact, learning how to lose or coping with the fact that you weren't the best player was a necessary skill to have for sheer survival purposes among your peers, because shedding any tears or moping around after a loss could really get you teased mercilessly, which of course makes any defeat just that much worse.

However, now there’s a different way that sports leagues operate and it’s hard to pinpoint exactly when that shift started to occur.

Nowadays it seems that most kids playing sports will receive a trophy, medal or ribbon for playing, regardless if their team won, lost or happened to tie—which some believe is a good thing, because it removes some of the competitiveness of sports and puts more focus on the fun, while others believe that constantly rewarding kids doesn’t teach them how to cope with loss or disappointment.

Craig Sigl, who’s an expert on sports training for both the youth and adults at the Seattle-based company Mental Toughness, says the basic concept of giving kids rewards is a good one for the youngest of athletes, but after that, it doesn’t have much use.

Additionally, Sigl says giving younger children a trophy or prize reinforces the core lessons that every person needs to have, not only as they continue in sports, but as they continue throughout life too.

“The idea behind this concept should be that very young kids learn at an early age that to join a program, commit to it and stick with it is a very good thing,” said Sigl in an interview with ConsumerAffairs.

“We are teaching them through sports participation, to go out into the world and participate. [To] do things. Be part of something.”

“We’re also teaching them to “follow through and don’t quit even though sometimes it’s not always exciting like a video game. People on the team depend on you [to have] discipline, to show up to every practice and game,” he said.

And without a medal, ribbon or trophy, these lessons are harder to drive home with younger kids, says Sigl, as children tend to learn through tangibles and will probably be reminded of their commitment every time they see their reward.

Not for older kids

But it’s important that parents don’t use this everyone-gets-a-prize approach for too long, because it won’t provide the exact same message to older kids, who have probably already grasped these lessons.

“The trophy or ribbon is a significant recognition of these attributes if the kid goes the whole season," says Sigl, "So I agree with the concept for kids in tee-ball and pee-wee sports. First, second grade, maybe third at the oldest. Generally not for kids who are older than that.”

But what about learning how to lose the right way, isn’t that important?

And since losing can be difficult sometimes, wouldn’t it be best to learn coping skills sooner than later? I mean, wouldn’t it be harder for an older kid to learn how to deal with disappointment if he or she never had to experience it when they were younger?

There are some people who believe that kids always getting a reward could potentially lower their motivation for participating in an activity, because their desire to join something could be replaced by an expectation of eventually being rewarded.

Some who believe this rationale point to a study led in the early 1970s by researchers David Greene, Robert Nisbett and Mark Lepper. 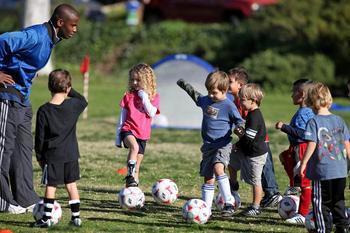 In the study, researchers gathered three groups of nursery school-aged children and provided each of them with a felt-tipped pen to draw with, which is a pretty big deal in a world when teachers want you to use only pencils with erasers in order to correct mistakes and make less of a mess.

The first group of kids were told they would receive a “Good Player” ribbon for joining the drawing activity beforehand. The second group wasn’t told they’d be getting a ribbon when they were done and the third group—the control group—wasn’t promised a reward at all and wasn’t given one.

After each group was finished, researchers watched the children as they played freely to determine how interested they were in drawing with the felt-tipped pens, and the first group who was told about the ribbons beforehand, played far less with the pens than any other group.

However the children who were either told about the reward after the drawing or didn’t get a reward at all seemed to be just as interested in using the pens as before and maintained the same level of interest.

Sigl feels being rewarded just for participation could be a good thing, but it has to be coupled with a detailed explanation by parents.

“Just giving out trophies without explaining what they are for invites all kinds of problems and doesn’t do much to protect kids' self-esteem,” he said.

“Without parental guidance and coaching of proper perspective of winning, losing and participation, children will make up their own mental stories about themselves, during these formative years that can affect them the rest of their lives. Generally speaking, kids should be rewarded and praised most for effort and not performance.”

Learning how to lose properly is key too, says Sigl, and parents should point their kids to other sports stories for examples of coming back after a loss, which of course teaches resiliency.

“Coaches and parents need to teach kids that there is huge value to be gained in losing just as much as winning,” he says. “Stories of great athletes losing big and then coming back even better are great ways to teach this.”

And what if a child continuously doesn’t perform well?

Sigl says that parents should always include their kid in the conversation about whether they want to keep playing or not.

“Praise effort [is key] and continually checking in to see if the child wants to keep playing next season,” he advises.

“There are many powerful lessons to be learned from being a supporting teammate as long as the child is having fun. A parent guiding the child and teaching good perspectives about performance will raise a child who is resilient and who learns to enjoy himself in the present moment regardless of performance.”

“In the adult world, we don’t play recreational sports to be the best in the world. We play to have fun, get exercise, enjoy completion and camaraderie; all excellent reasons to play sports in childhood and for the rest of their lives.”

Another way for parents to teach disappointment, especially if a child likes a particular sport, tries hard, but doesn’t get selected for a team, is to make sure the child never gets the impression that your interest or love hinges on their accomplishments—and this same approach can be used in or out of the sports world when children face disappointment.

“First and foremost, it’s a parent’s imperative to make sure a child never gets the idea that their love and acceptance are conditional on any type of performance,” says Sigl. “Even the best of sports parents often subtly communicate this message with disapproving body language that will trump mere words.”

“In this event, a parent should first allow the child to express the feelings of disappointment and acknowledge them without judgment and without giving advice. After the emotions subside, a parent can ask the child what they would like to do next and offer support as long as it is within the family’s values.”