Anger can lead to health complications in older adults

Researchers suggest the emotion can be more harmful than sadness 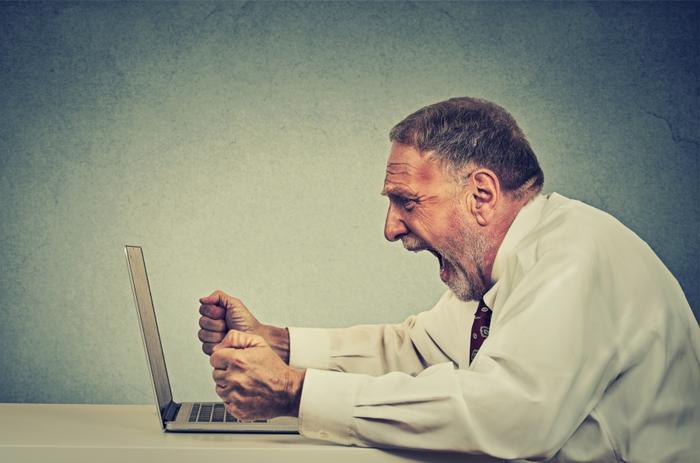 Anything can spark a bit of anger -- spilling your coffee in the morning or sitting in rush hour traffic -- but not too many consumers think of how that all-too familiar feeling can manifest itself in their health.

According to a new study conducted by the American Psychological Association, anger can increase inflammation throughout the body in older adults. Unfortunately, that can lead to an increased risk of diseases like cancer, heart disease, or arthritis.

“As most people age, they simply cannot do the activities they once did, or they may experience the loss of a spouse or a decline in their physical mobility and they can become angry,” said researcher Meaghan A. Barlow. “Our study showed that anger can lead to the development of chronic illnesses, whereas sadness did not.”

To see how anger manifested itself in potential health complications, the researchers observed over 220 older adults between the ages of 59 and 93.

The study spanned one week, during which the researchers gained insights about the participants’ current health standing, took blood samples to analyze their current inflammation levels, and had them complete questionnaires to evaluate their emotions, placing a particular emphasis on anger and sadness.

For the advanced old age group, the researchers found that anger became physically troublesome by contributing to higher levels of inflammation. They pointed out that this could lead to future health concerns.

According to Barlow, age really was the biggest difference here. While the younger group can most likely use their anger as “an energizing emotion” that “can help motivate them to pursue life goals,” the older group wasn’t as lucky.

“Anger becomes problematic for adults once they reach 80 years old...because that is when many experience irreversible losses and some of life’s pleasures fall out of reach,” Barlow explained.

The researchers emphasized that knowledge is power in situations like these. They say that ensuring that older people have this information and tangible coping mechanisms to help deal with these emotions in healthy ways is crucial.

“If we better understand which negative emotions are harmful, not harmful, or even beneficial to older people, we can teach them how to cope with loss in a healthy way,” said Barlow. “This may help them let go of their anger.”

While learning how to cope with emotions and maintaining a positive attitude is critical for consumers of all ages, recent studies have shown just how important it is for the older demographic.

Researchers have found that staying positive about aging can be the key to helping older adults handle stress.

According to researcher Shevaun Neupert, “the way we think about aging has very real consequences for how we respond to difficult situations when we’re older.” The study also revealed that consumers’ emotional responses can affect their health and quality of life.