The benchmark average has soared nearly 8% since election day 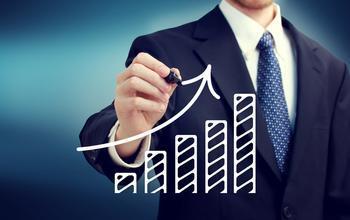 The stock market continues on the more than month-long rally it enjoyed since election night, when Donald Trump upset all conventional wisdom and won the presidency.

Before the votes were counted, stocks had risen in anticipation of a Hillary Clinton victory. Conventional wisdom held that the market would crash should Trump somehow be elected. But Trump was elected and the market definitely did not crash.

On November 8, election day, the Dow Jones Industrial Average closed at 18,332 after gaining 81 points during the session. Since the surprise outcome to the election, the Dow has surged 1,466 points, a nearly 8% rise. It is now within striking distance of the 20,000 mark.

Consumers who are not active traders or retail investors, the way many were back during the dot-com boom, may think this doesn't really concern them. But if you receive a pension or have retirement funds in mutual funds, you have likely benefited over the last month charge of the bulls.

Where does it go from here?

But where does this rally go from here? Opinions are divided, though there is growing concern that stocks have risen too far, too fast.

In its Fed survey for December, CNBC polled various Wall Street players about their sentiment. Most expressed the view that the market has gotten carried away, pricing in outcomes of anticipated Trump Administration policies, when it is not clear these expectations will become a reality.

CNBC quotes one respondent, Marshall Acuff, managing director of Silvercrest Asset Management, as writing "expectations in the stock market are beginning to run ahead of reality."

The banks are back

Much of the rally has been powered by the big banks, whose stocks have languished for years under tight regulation. The bank stocks have led the rally on the belief that the Trump administration and GOP Congress will roll back many of those regulations. Banks are also benefiting form the widespread belief that interest rates will rise.

The Federal Reserve is widely expected to announce a quarter percent hike in the Federal Funds Rate at Wednesday's meeting, but interest rates set by the market have already risen since the election, based on the belief that a Trump Administration will grow the deficit to spend on infrastructure.

The million dollar question, of course, is where the market goes once the Dow acheives 20,000 and Donald Trump actually becomes President. Does it soar even higher or crash back to earth. Again, the opinions are divided, though one hears a more cautious tone these days.

Trump pal and hedge fund titan Carl Icahn has suggested in recent days that the market is being buoyed by what it perceives as a more pro-business administration. However, he says that prices have gotten a little ahead of themselves.

Icahn also notes no one wants to sell and take profits before the end of the year because they don't want to pay 2016 capital gains taxes. By waiting until January to sell, they can postpone tax payments for a year.

If that is indeed a widespread position, then there is no reason to think the market won't continue rising until the end of the year. What happens in early January, if investors start taking gains, could be something very different.