Reporters often banned from public meetings even though it's unconstitutional 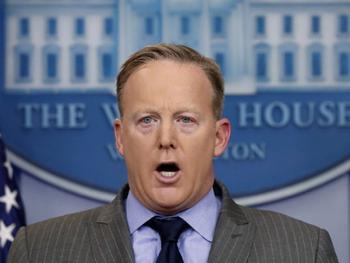 Everybody hates reporters, or journalists as they're now called. Reporters know this and generally don't give a damn. Consumers should care though, since reporters are their eyes and ears and their primary job is to report on how taxpayers' representatives are conducting themselves.

This is not just an opinion, it's the law. The Constitution enshrines the right (and duty) of the press to report all the news it deems fit to print or otherwise distribute. No other private enterprise -- not lobbyists, not airbag manufacturers, not dietary supplement hucksters -- are specifically mentioned in the Constitution.

It is also worth noting that journalism is not fed from the public trough. Taxpayers can choose to subscribe to a newspaper or cable channel, but it's their choice. This, obviously, isn't true of the services provided by governmental entities.

Thus the hubbub that ensued when White House Press Secretary Sean Spicer barred some reporters but not others from a briefing last week. The briefing was being conducted on public property by public employees being paid with taxpayer funds and concerned the public's business. Some states have what are called "open meeting" laws that spell out in detail the right of the press to cover public events, but there is a notable lack of consistency and the feds are generally quite far behind.

May have been illegal

In light of all this, it's worth noting that just last Monday, a federal judge in New York ruled that the New York Police Department may have acted illegally when it revoked the press credentials of a free lance reporter, Jason B. Nicholas.

Judge J. Paul Oetken wrote that earlier decisions have held that it is impermissible to exclude reporters from public events "in a content-based or arbitrary fashion." In other words, public officials can't exclude reporters whose stories they don't like while freely admitting those who parrot the prevailing party line.

"If you exclude reporters from briefings that they otherwise have a right to attned because you don't like their reporting, then you have engaged in viewpoint discrimination," which he said is almost always unconstitutional.

The White House case generated a vast outcry because, well, it's the White House, and the barred reporters worked for some of the country's largest and most reputable news organizations. But similar things happen every day around the country and often go unreported, at least in part because the press is not the unilateral foe its critics make it out to be. Many reporters are lazy or simply afraid to rock the boat.

In my earliest years as a reporter, I was covering a city council meeting in a small Midwestern town for the local weekly when Tony Stevens, a reporter for a large regional daily, interrupted the meeting to say that remarks by the mayor indicated a decision had already been reached on a matter that had never come before the council in a public meeting.

"Did you guys get together at the Logan House (a local watering spot) and decide on this among yourselves or what?" he demanded. The mayor and councilmen fell silent for a moment, then scheduled a public hearing to discuss the issue, as they should have done in the first place.

Some other reporters were aghast and thought that Tony, who until then had been best known for his red golf socks, had been out of line, but it was quite clear to me that it was the elected council members who had tried to sneak something past the reporters and the taxpayers they represent and that Tony deserved an award, or at least a free round at the Logan House.

Fast forward to about ten years ago when the Senate Press Gallery, a group of reporters who regularly cover the House and Senate, ejected ConsumerAffairs reporter Joe Enoch, giving no reason and providing no opportunity for Enoch or ConsumerAffairs to appeal.

Gallery employee Joe Keenan, whose salary was paid by taxpayers, refused to meet with Enoch's editor (me) and would say only that he had questions about ConsumerAffairs' "business model," which was then pretty simple: we tried to sell enough advertising to keep the lights on. Other long-accredited members openly work for industry interests or foreign publications.

How is it that reporters from these publications are permitted to cover the people's business when a consumer news site is not? The question was never answered and board members refused to discuss it. Unlike the case of The New York Times, CNN, and Politico, among others, being barred from the White House briefing, no other reporters came to our defense and Enoch was unable to cover some hearings crucial to investigations he was then conducting, effectively deep-sixing some promising stories.

At the time, Enoch was covering the somewhat controversial nomination of Michael Baroody, then-President Bush's nominee to head the U.S. Consumer Product Safety Commission. He had recently exposed a computer sales scam and several "cramming" scams involving telecommunications companies. This perhaps offended some journalists who consider "consumer journalism" to be demeaning clickbait.

Why is this important?

Open government is important to consumers -- taxpayers, citizens, Americans -- because it is their health, welfare, safety, and financial well-being that are largely determined by government bodies. When some reporters are barred from public events, taxpayers don't get all the information they might have otherwise received.

I hear from readers who say the press is only out for itself, is pushing an "agenda," or seeking special treatment. But while it's true that journalism organizations spend time and money fighting illegal and unconstitutional restrictions, their bottom line is not really affected.

After all, on any given day, there is more news than anyone can possibly cover. But consumers should wonder what they're missing when public employees sit around in public buildings and conduct the public's business in private. What don't they want you to know about?