This company is not yet accredited. See reviews below to learn more or submit your own review.

Puffy Mattresses is a bed-in-the-box mattress company that sells exclusively online and delivers directly to your door. There are two different types of Puffy mattresses: the Puffy Mattress and the Puffy Lux Mattress. They also supply several accessories, such as bed frames, pillows and mattress protectors. Puffy provides a 101-night risk-free trial, free shipping and returns, and a lifetime warranty.

Puffy offers quality memory foam mattresses designed for complete support and temperature regulation. While the Lux model is a bit pricey compared to other memory foam options, financing is available.

Our favorite mattress companies of 2020

Shop Now
Are you this business?

Our favorite mattress companies of 2020

Puffy mattresses focus on easing back and joint pain using their Cooling Cloud foam to eliminate pressure points and improve circulation. Puffy offers foam mattresses to suit all sleep positions, including back, side and stomach. Puffy mattresses are sold exclusively online and offer a 101-night sleep trial. If you don’t think the Puffy mattress is right for you in that time frame, you can return it for a full refund.

Our top pick for Puffy 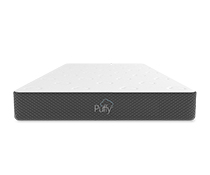 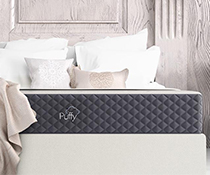 Puffy Lux is similar to the classic but features body-adapting foam to enhance support and minimize strain on your body’s pressure points. This model includes an extra climate-adapting layer that helps regulate body temperature during the night. 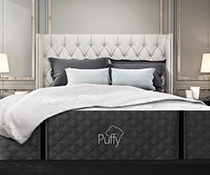 Features an exclusive top layer infused with cooling beads to minimize heat absorption. This model is also designed with dynamic SMT technology that provides support to the back while keeping a softer feel around the head, neck, shoulders and feet.

Puffy mattresses are made out of several layers of foam.

Puffy mattresses are designed to support most individuals, regardless of sleeping style.

If you’re looking for a memory foam mattress designed to support all sleeping positions and provide mid-level firmness, Puffy mattresses may be a good option. As an added benefit, the advanced cooling technology built into Puffy mattresses make them an ideal choice for hot sleepers.

Sort: Top reviews
Top reviews
Recent
Oldest
Most helpful
Filter by: Any
Any

Our first mattress-in-a-box experience. While the mattress was not firm enough for our needs, the return process went very smoothly. We followed the directions carefully. Within a few days of initiating the return, the charity had picked up the mattress (they wrapped it so we didn't have to) and the refund was processed the next day.

The mattress has really helped with my lower back issues. However I find that the foam mattress is very warm, especially now in the summer. I can’t seem to get comfortable due to the fact that I feel it is causing me to be extra warm at night. I think I might have to spend extra money to get some kind of gel topper.

Delivery is fast and on time. Good selection on products. Sometimes products are a little pricy. Go to email find better deal. I do like to join the free delivery. I accidentally click on take advantage and find out later I signed up for something I did know a charge each month.

The mattress that I have has been good for a while now and it seems to be well since I have had it. It seems to be comfortable to sit and rest on and I would recommend it to people if they are looking for a mattress for them.

Very comfortable, firm enough for good support, but not too firm. Fast, easy delivery. Set up was quick and easy. Two people can easily unpack it and set it up. Best of all -, there was NO smell whatsoever from the moment we took it out of the box and packaging. NONE.

I ordered the top end Puffy Lux Mattress. As soon as I pushed the buy button, I had regrets and immediately tried to cancel the order. All of this was on the internet. I received a confirmation email and of course my credit card was immediately charged the full amount. I responded to the email with my request to cancel the purchase. I should have immediately challenged the credit card charge, but it was my fault and I assumed that the company would do the right thing.

I responded that it shouldn't be shipped as I had cancelled the order and received confirmation from them that they would cancel it. They said sorry, the mattress was shipped before the cancellation. This was flatly not true. They asked that I refuse shipment when it arrives. I immediately contacted the shipper and told them I was refusing shipment on the mattress and it should be sent back. They said that they heard from the company that it had been cancelled and would be returned. They gave me a "case number". A couple more days went by and I received another notice of when the mattress would be delivered! I called the shipping company again and was assured that it was shown as refused and they would send it back when it arrived at the destination city.

A couple more days and the mattress appears at my door! Just by luck, I heard the truck and ran out in time to stop them from driving off. They had simply dropped the box on my porch and were ready to leave. No signature was required on a nearly $3,000 purchase!! I contacted the shipping company and they said they were required by the company to make at least one attempt to deliver the mattress. Amazing. All my cancelling the order, refusing delivery through the shipper and assurances all along the way that they would honor my wishes and it was all lies. I contacted Puffy again and demanded my credit card be refunded since they had had my money for (at that time) 12 days and I had cancelled the purchase in the same hour that I hit the buy button. They said they could not refund until they received the mattress back at their location.

After telling them that was unacceptable and a few other reminders that that was close to if not outright fraud, they agreed to a refund, but it would take 3 to 5 days for it to show up in my account. Isn't it odd that it takes mere moments to appear as a charge on your credit card, but 3 to 5 days to put it back on the same card? That was two days ago and I am still waiting for my money to be returned to me. In my opinion this company had done nothing but lie to me since the beginning of the transaction. It is not a company that I would consider doing business with ever!

Puffy mattress they did they give you 101 days. They are saying I return them the mattress. It pick by non profits organization and they are the one who give them all the reviews in the web. Otherwise their service is the worst and their product is made in China with low quality. I do not recommend them. Buy your mattress from store. All this online service is bad and nasty. It is shame. They build their reviews on lying to people.

Bought a mattress that I never received and they don't answer email, phone, online form, or reviews. I have not had a single communication since I paid them. I have tried over a period of time to contact them in various ways but they do not respond. They don't even allow you to call them to inquire.

Purchased adjustable bed & mattress, wasn’t comfortable. The mattress isn’t made for adjustable beds. Anyway waited 2 weeks and 1 day for 1800gotjunk to pick it up. It’s been a week and they don’t answer their phone or emails! Disputing with credit card, this is ridiculous! 101 days trial is a joke. HEADACHE. They will never post a review 1 star, it gets deleted.