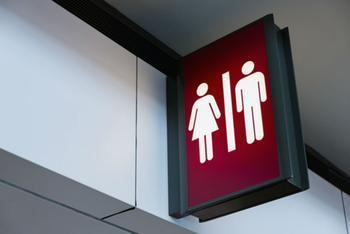 If you travel, go to a ball game or concert, or spend time shopping, chances are you will frequent a public restroom every once in a while. Admittedly, some experiences are better than others.

Bradley Corporation, a maker of restroom fixtures, has compiled a survey of consumers on some of the odd behavior that goes on inside these facilities.

Then again, some might not find it so odd.

For example, most of the consumers in the survey found nothing unusual about using cellphones while in a restroom stall, although most don't carry on conversations. Rather, they use their phone to text, send or check email, post to social media sites, or just surf the web.

Six percent of respondents admit they've taken a photo while in a stall, which might be unusual in anyone's book.

“Since there's a prevalence of cell phone usage in restrooms, it's not surprising to hear that London scientists say one out of six cell phones tests positive for fecal matter,” Bradley said in a press release.

The company's survey also found that many consumers have an aversion to touching certain restroom surfaces. Restroom door handles, stall doors, and faucets top the list. Consumers also say they often use a foot to flush a toilet and use a paper towel as a barrier when opening a restroom door.

Overall, consumers are turned off by dirty or messy restrooms, perhaps a universal point of view. If a dirty restroom is located on the premises of a business, consumers are much more likely to hold a negative view of the business. Again, no surprise there.

Bradley reports public restrooms are apparently getting worse, not better. Nearly 70% of the respondents reported a recent unpleasant public restroom encounter, up from 51% four years ago.

Restrooms at work also appear to be going downhill. Only half of the respondents rated the facilities at their workplaces as excellent or very good, compared to 66% in 2012.

While consumers would like cleaner restrooms, Bradley finds that not all consumers are practicing clean bathroom procedures. About 80% of respondents said they regularly see others leave the restroom without washing hands. Men appear to be the biggest offenders.