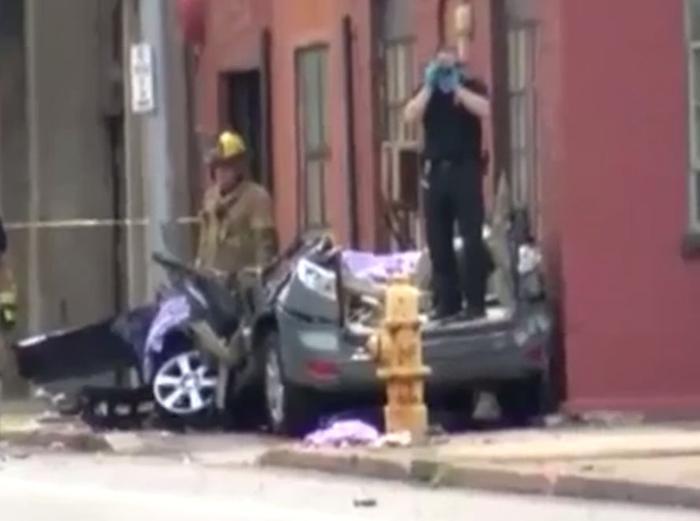 Police investigating a fatal car crash between a Hyundai and a semi-trailer truck in Pennsylvania are reportedly looking into the possibility that the Hyundai accelerated on its own.

Victims Oscar Johnson, Willie Byrd, and Charles Barnes were traveling in Johnson’s 2009 Hyundai Santa Fe in Erie on July 7. Witnesses told police that the car was speeding and swerving through traffic. Surveillance footage, according to the police, shows the Santa Fe swerving to avoid two vehicles before running a red light and crashing into a semi-trailer.

The driver of the trailer truck was not harmed. But Johnson and Barnes, who were both 65, and Byrd, 72, all died at the scene. The men reportedly knew each other through a local church.

Erie Police Department Chief Donald Dacus told the Erie Times-News on Monday that investigators believe the accident was either caused by a medical episode or a mechanical problem in the Santa Fe. In an interview with the newspaper, Dacus referenced  “numerous consumer reports nationwide” that descibe an “accelerator that sticks.”

An interview that another investigator gave the local paper on Wednesday was even more assertive in pinning blame on the Hyundai. Sgt. Jeff Annunziata told the paper that he believed the crash was caused by a “mechanical” issue within the vehicle. The person driving the Hyundai -- police have not yet said who was actually driving Johnson's car, as two of the victims' bodies were ejected from the vehicle on impact -- acted heroically by swerving to avoid two cars, the sergeant said.

“He really did a heroic thing doing what he did,” the sergeant told the paper. The police department has not yet announced its final, official determination.

Hyundais have been investigated in Asia

The little-understood phenomenon of a car accelerating on its own while the brakes fail is often referred to as sudden unintended acceleration. Numerous vehicle makes and models, including Hyundais, are suspected of having the defect.

Still, those rulings vindicating Hyundai did not quash concerns about runaway Hyundais abroad. In August 2016, black box footage that appeared to show a Hyundai speeding on its own as its panicked driver swerved to avoid people was published to YouTube. Three passengers died in that crash.

Hyundai’s spokespeople have maintained in interviews with ConsumerAffairs that “pedal misapplication” on the part of confused drivers is what actually causes the crashes.

The company's press team responded to the Erie crash by creating a "fact sheet" for the media that aims to debunk concerns about sudden unintended acceleration. "We were unaware of the Erie case until brought to our attention by the media reports yesterday," Hyundai says in a statement. "We plan to investigate the Erie incident very carefully and thoroughly because nothing is more important than the safety of our drivers."

But in the same fact sheet, Hyundai asserts that "there is nothing mechanically wrong with our vehicles, including the 2009 Santa Fe," and suggests that Johnson accidentally stepped on the gas pedal instead of the brake.

"According to the press reports, Oscar Johnson was 65 years old and had only recently obtained the Santa Fe. Government studies have shown that pedal misapplication is much more likely with elderly drivers especially vehicles they are unfamiliar with."

Consumers in the United States can submit complaints about their cars to the National Highway Traffic Safety Administration website. A search of “Hyundai” and “unintended acceleration” in the agency’s public database turns up more than three dozen reports.

The 2009 Hyundai Santa Fe specifically has six public complaints about occasions when the car “suddenly accelerated.”

“ON MARCH 24, 2010, MY CO-WORKER AND I WERE IN MY 2009 HYUNDAI SANTA FE WHEN IT SUDDENLY ACCELERATED,” reads one of those complaints. “I PUSHED THE BRAKE TO THE FLOOR AND IT WOULD NOT SLOW DOWN. I THEN PUT ON THE EMERGENCY BRAKE. BOTH FEET WERE EXTENDED TO THE FLOOR HOLDING THESE BRAKES DOWN.

“THE CAR DID SLOW DOWN BUT WOULD NOT STOP. I HAD TO TAKE A LEFT TURN ACROSS THE HIGHWAY (THERE WAS FORTUNATELY A BREAK IN THE TRAFFIC), I PUT THE CAR IN PARK AND TURNED OFF THE ENGINE. IT MADE A VERY LOUD NOISE THAT LASTED ABOUT 10 SECONDS OR SO. WE JUMPED OUT OF THE CAR AS IF IT WERE ON FIRE. IT'S CURRENTLY AT THE SHEEHY DEALERSHIP IN WALDORF, MD. WE ARE AWAITING THEIR DIAGNOSIS.”

Johnson had also complained about acceleration problems in his own 2009 Hyundai Santa Fe, the local newspaper reported. Friends of Johnson’s told the Erie Times-News that Johnson had purchased the car only five days prior to the crash, and complained about an unspecified problem with the accelerator during that period.