Honda is introducing a Civic hatchback for 2017

New 5-door model will only come with a turbo engine 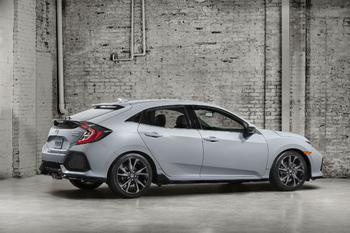 The Honda Civic is already one of the best selling cars in America. Valued for it's quality, features, and resale value, Kelley Blue Book declared the 2016 Civic the winner of its Overall Best Buy Award.

New for 2017, Honda is introducing a Civic Hatchback, a styling throwback to the 1960s and 70s. The new model offers Euro-inspired styling and five-door versatility. It will also serve as the basis for the new Civic Type-R launching in the U.S. in 2017.

"Now, we're bringing this sporty, stylish and versatile Civic Hatchback to North America, as we amp up the performance of our incredible Civic lineup with each new Civic model," Conrad said.

The Civic Hatchback will come in LX, Sport, EX, EX-L, and Sport Touring trims. Engine features, however, are limited. In the U.S. market, the hatchback is powered by a 1.5-liter DOHC direct-injected turbocharged in-line 4-cylinder with peak output of 174 horsepower and 162 lb.-ft. of torque in LX, EX and EX-L trims. The Sport and Sport Touring trims will offer 180 horsepower and 162 lb.-ft. of torque, featuring a high-flow center-mounted exhaust.

Options on the turbo engine

The turbocharged engine will have some options. It comes with either a CVT in all trims or a performance-inspired 6-speed manual transmission in the LX, Sport, and EX trims. It's expected the hatchback will achieve EPA fuel economy ratings of 31/40/34 mpg (city/highway/combined) for CVT-equipped models, based on the newer, more stringent model year 2017 EPA ratings requirements.

Most trims will offer the Honda Sensing suite of driver-assisting technologies, including a collision avoiding braking system, forward collision warning, and systems to alert you when you veer out of your lane.

The Civic Hatchback is based on the 10th generation Civic design that has won the praise of automotive experts, as well as drivers. Car and Driver, already a Civic fan, opined that the hatchback builds on an already pleasing design and makes it better.

Other features include Honda Display Audio with Apple CarPlay and Android Auto, on the EX and above trims. Heated front seats and heated side mirrors, power driver and front-passenger seats, and remote engine start will also be available.