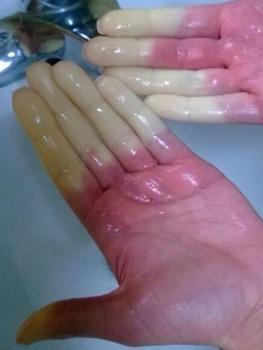 In the coming weeks, zombie fans of all ages will dress up to celebrate Halloween. However, many consumers may not know that October is also a designated awareness month for a medical condition often referred to as “Zombie Hands.”

Officially called Raynaud’s Phenomenon,  the condition affects approximately 15-30 million Americans and occurs when the blood vessels in the fingers, toes, ears, and other extremities spasm -- causing pain, numbness, throbbing, and tingling. The condition has been referred to as “Zombie Hands” because affected areas will often turn white, then blue and red.

The spasms are caused by exposure to cold, or when the extremities are stressed, and the majority of sufferers are women. While the symptoms might not seem dangerous, experts say they can indicate the presence of other serious complications.

“Only 10 percent of people with Raynaud’s seek treatment,” said Lynn Wunderman, founder and chair of the Raynaud’s Association. “They often dismiss the discomfort or pain by saying they have poor circulation or are allergic to the cold. But their symptoms could be a sign of an underlying serious condition such as scleroderma, lupus, and other possibly life-threatening diseases.”

It’s important to note that consumers who have Raynaud’s may not necessarily be in immediate medical danger. The onset of symptoms can often occur months or years before the presence of more serious problems, which is why proactively seeking medical treatment can be vital.

Wunderman points out that the Raynaud’s Association usually sees its highest traffic during the colder months of the year because of the symptomatic reaction. However, the condition can be an ongoing concern regardless of the weather.

“Walking into an air-conditioned room can make your fingers or toes throb or sting. Holding a cold glass or putting your hand in the freezer can be very painful. And, of course, stress knows no seasons,” she said.

Although consumers with Raynaud’s can compensate for the condition to some extent by opting for warmer clothes, there are currently no FDA-approved drugs to treat symptoms. However, affected consumers should speak with their primary care physician to discuss the best available options for them.

You can learn more about Raynaud’s by visiting the Raynaud’s Association’s web page here.