Avocado’s Green mattress and Vegan mattress are hybrid latex mattresses made from eco-friendly, natural materials. An additional pillow-top can add additional comfort and make the mattress less firm for those wanting a softer feel. Great edge support and high durability round out the top features of the Avocado line of mattresses.

Avocado’s two mattresses, Green and Vegan, are luxurious hybrid latex models with eco-friendly materials. Both are made in the USA and come with a 25-year warranty.

Avocado mattresses come in two straightforward offerings: Green or Vegan. A pillow-top is available at an additional cost for added comfort and a less firm mattress overall. Both mattresses have Dunlop latex and a layer of innerspring coils that allow for a cool sleep and good edge support. The Green Model has wool, but the Vegan mattress uses cotton instead to keep the model free of any animal products. Each mattress comes with a 25-year warranty and a 100-night sleep trial. All products are handmade in the USA. 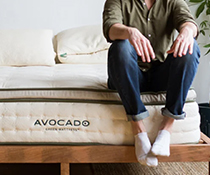 Our top pick for Avocado 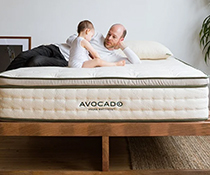 Similar to the Green mattress but made with organic cotton instead of wool. Constructed with latex and pocketed support coils. No polyurethane foams, polyester or toxic fire retardants. Certified vegan and PETA-approved. 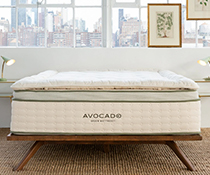 Quilted from certified organic and natural materials, including alpaca, wool and cotton. . Finished with four hand-stitched elastic straps to hold it in place. Plush topper is 3 inches thick. Fits all Avocado mattresses.

The Avocado Green mattress is a latex hybrid model made with organic wool, Dunlop latex and a dense layer of innerspring coils. The mattress is eleven inches thick and comes in at a Medium Firm on the mattress firmness scale. If you add the optional pillow-top, the mattress becomes a Medium on the firmness scale. The Vegan model is similar to the Green model except it uses cotton instead of wool, making it free of all animal products.

Dunlop latex and layers of innerspring coils make for a luxurious, cool sleep, and an optional pillow-top gives some additional comfort while softening the mattress. The Dunlop latex conforms well to the body, offering relief from pain and pressure.

The Green model and Vegan model are the same price. The additional pillow-top costs anywhere from $240 to $500 extra. Although the mattresses are pricy, the costs are comparable to other high-end hybrid mattresses.

Avocado mattresses are a good choice for those looking for an economically conscious hybrid latex mattress. The Vegan mattress is a great option for those who prefer to have no animal products in their mattress. A cooling sleep and solid edge support are two other important factors that make Avocado mattresses well worth it.

I received my green mattress October, 2019, so I've had 2 1/2 years of experience to date. I weigh approx 190lbs, 5'11". Ordered a king, which weighs around 140 lbs. I started off sleeping right in the middle of this bed, and after a few nights I would sink bit by bit until it felt like there was a few inches of indentation that wouldn't self-repair. I would then move to the edges of the bed, which held up a little longer before sinking.

Over the last 2 years, I've either changed my sleep position of slept on the couch, depending on my mood. While my foundation (made specifically for heavy latex mattresses) could be part of the issue, it seems obvious that Avocado latex mattresses do not have the ability to absorb body weight without compromising integrity or to recover from it. I even bought the almost $700 2" topper (firm) in 2020 but that did nothing. Avocado seems like a top-notch company regarding material usage (organic, high-end plush fabrics) but are still in experimental stage when it comes to the prevention of mattress sagging/cratering.

Avoid Avocado at all cost. I ordered a $7000 top of the line mattress 8 weeks ago and it still hasn't arrived. I was told when I ordered it that it would take 4-5 weeks but was told "it usually comes much faster". They claimed they shipped it three weeks ago but after calling the shipping company several times I have been told that they don't have it. Then they tell me that they are using a third party company but they don't have any tracking for that company. It doesn't take 3 weeks for something to move across the country.

Additionally, since I ordered it they have lowered the price of the mattress by $700 and when I asked for a price adjustment I was told it was a "different" mattress because it was 1" thinner but it was called the exact same name (not 2.0 or new). They said they wouldn't give a price adjustment but I could cancel the first one and order the "new" one but it would be another 5 weeks which would most likely be 8+ weeks given how things have gone so far. They have repeatedly lied about the status and it's a different story every time I have called.

To put it bluntly they are incredibly poorly run (much like Peloton). To make matters worse they claim they make their own mattresses but the shipping company let the cat out of the bag and stated that it was coming from Masterpiece which is a mattress manufacturer in Los Angles (the same place Avocado says they manufacture) so I have serious doubt about their claim of making it themselves. They simply can't be trusted and I don't believe they will be in business long enough to cover any warranty they offer.

I have not yet received my mattress, so I can't speak to that but if I had to redo this I would go with a different company. I went to the Santa Monica store to place my order and had a great experience - we tried all the beds and found the one we liked best. I went home and ordered on July 10. The website claimed a wait time of 5-7 days. The personalized email I received said 3-5. I followed up after 5 days and was told wait 5 more. Fine. It's now July 26 and there is still no timeline for when the mattress should ship, just "hopefully by August 2nd." For $2,500, I expect a company to keep their word or proactively update me on delays. I bought new bedroom furniture, as I am upgrading bed size, whose delivery I continually have to delay. The customer service is polite, but useless as they can't help at all. I wish I had ordered from elsewhere and hope you do.

Bought the Avocado all natural latex mattress in May 2021, hoping it would be like my old organic latex mattress which I l used for 10 years. I'm 100lbs, 5'2", and side sleep alone. I have a fancy German slatted frame underneath. This is NOT the bed for me. Perhaps the more popular Avocado hybrid with springs is better. I am going to try my friend's and either swap or just ask for a refund. Since May, I have felt more back and shoulder pain in bed in years! I need a firmer bed with more support.

My wife passed away last year after a 6 year battle with ALS, and I held off on purchasing a new mattress because our old mattress reminded me of her. Nevertheless, after one year, I finally got the courage to replace our old mattress and decided to buy an Avocado mattress for $1,799. Not inexpensive by any standards, but I need to sleep better. I was very much looking forward to getting my Avocado mattress that I purchased on Sept 19, 2020, but as I write this today on January 15, 2021 (5 months after I paid for my Avocado mattress), I still have not received my mattress, even though they have had my money for 5 months. On January 11, 2021, I contacted Avocado customer service via text (because they do not publish a phone number to reach them) and a person named Madeleine said she would send a note to their warehouse to find out the status and get back to me. 5 days later, I still have not heard back at all.

Everyone blames everything on COVID, and Avocado Mattress is no exception with their excuses. But 5 months of having my money and not delivering a product is unacceptable. And not getting back to me after I tried contacting customer service is also unacceptable. The company is a scam and now I have to file reports with the Better Business Bureau, and take to social media to warn others of their deceptive business practices. I am also going to have to contact my bank and try to get my money back for non-delivery of services. Anyone considering purchasing from Avocado so be beware of their business practice.

Extremely comfortable mattress. Great support, even for back trouble. It is very heavy and takes two people to handle. Ordered two, weeks apart, both boxes arrived destroyed. Just too much for one delivery worker to handle.

Bought a Queen-size mattress. The mattress is HARDNESS 7. We are two weights and two sizes couple. Whether getting in bed or getting out of bed, the other spouse is not bothered by the others activity. Clockwise rotation of the mattress every 100 days.

Finally got a great nights sleep. Glad I got rid of my Tempur Pedic and upgraded to the queen size AVOCADO. Plush mattress topper and just love the innerspring feature. Delivery was the greatest. Watched the video for unpacking the mattress and this made my efforts to install the mattress really easy as can be. Would buy it again!!!