Get 50% off your first order on Nom Nom Now. Restrictions Apply!

Purina Dog Chow products include wet food, dry food and treats. Though a little on the expensive side, its food for puppies and adult dogs includes real chicken, beef, lamb or turkey.

Get 50% off your first order on Nom Nom Now. Restrictions Apply! 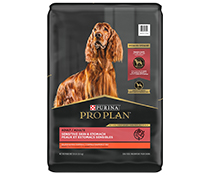 Our pick for Purina 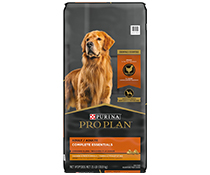 Combines chewy morsels with crunchy kibble. First ingredient is chicken. Supplemented with probiotics to support immune and digestive health, plus vitamin A and omega fatty acids for coat and skin. Minimum crude protein is 26%. 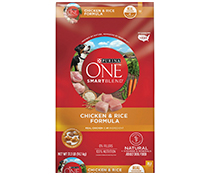 Features chicken as the first ingredient. Made with vitamins E and A plus zinc, selenium and omega fatty acids to support the immune system and a healthy coat. Suitable for adult dogs of all breeds. Minimum crude protein is 26%. 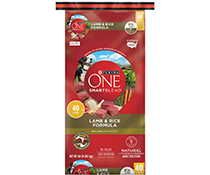 Combines lamb with other protein sources to help support heart health and strong muscles. Lamb is a natural source of glucosamine, which is good for your pet’s joints. Minimum protein is 26%. 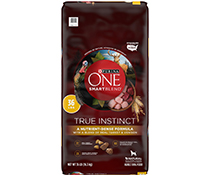 Made with turkey as the first ingredient. Also includes venison, whole grain corn and oatmeal for meaty morsels and crunchy bites. Guaranteed minimum crude protein is 30%.

The dog food is a good source of nutrients for dogs of any age. They enjoy the food, and I think it is a great dog food. People buy this dog food more I think than any other brand. From a puppy to a adult dog.

I have fed Purina Dog Chow to every dog I had since the 80s. They live long happy lives. The quality seems to be very good for the price you pay. I will continue to feed this brand of dog food until I no longer have a dog.

Purina is a little on the expensive side but it is the only brand that my dog would eat (she was a picky eater). Also did not cause my dog to have diarrhea or constipation which happened with other brands.

Purina is a great company! I have fed it for many years. I feed dogs, cats, ducks, chickens and goats. Haven't had problems with any Purina products as of today. I also have had several Veterinarians and dog trainers to recommend feeding Purina Pro plan.

I have never used Purina puppy food... Bought it yesterday 10/31/21 and gave it to my babies. Today they are all sick! Vomiting, diarrhea and crying in pain. They are the loves of my life and never will I use this again! Now to see how they feel tomorrow. They all have bloody stools. My poor babies.... Don't feed this to your babies, this is horrible!!!

I have a healthy 8 year old pitbull. He has had all vaccinations and is a strictly inside dog with no unsupervised trips outdoors. He normally eats Purina One and has since he was a puppy. Yesterday, I hadn't gone to the store yet and had a bag of Purina little bites that I had gotten on sale to donate. I gave my dog a bowl of little bites to tide him over. He was excited and jumped around barking at his food because it was new. He ate the whole bowl. An hour later, he started feeling sick and vomited 3 or 4 times. I assumed it was bloat and let him rest.

After 10 minutes or so, he became lethargic. He wouldn't move at all and felt cold to the touch. We went on to bed but kept him next to me. 3 hours later, I checked on him and he was having problems breathing. We loaded him up and carried him to the vet. They did immediate oxygen, xrays and blood work. He had all signs of a poisoning! He was dehydrated, bad liver enzymes, high white count and heartbeat was irregular. They started antibiotics and kept him in ICU for 5 hours hoping for a miracle when he went into cardiac arrest. My healthy 8 year old pup is dead because of a bowl of Purina Little bites. Please Please do research before you try a new food. I didn't read any beforehand and now I'm burying my best friend..

My dogs have been on Purina chicken flavored food for years, this last bag after eating they keep throwing it up, I think it's this bag of food, got to change brands I guess. I dont understand why it's making them sick.

We started feeding my dog Purina Dog Chow because it was cheaper. Within two weeks, my dog went from healthy to DEAD. Lethargy, loss of appetite, occasional vomiting. Finally liver, gallbladder, and intestinal SWELLING. Her liver failed and the vets couldn't figure out what had happened. But after seeing other reviews of very, very similar experiences with their pets, I'm convinced this dog food killed my pet. Please do not feed your dogs this kind of dog food.

I purchased a 36lb bag of my dogs food and when I got home I poured it in the food bin only to find hundreds of maggots. When I returned it to the store for a refund, I was informed that several shipments have been like that to their other locations and they are pulling them off the shelf. BEWARE OF THE LARGE BAGS!

Our dogs have been eating Purina Dog Chow - Complete Adult with Real Chicken for a while without any trouble. Just opened a new bag and the after the first feeding, one of our weimaraners threw up 7 times. Took her off the food and gave her boiled rice and chicken after which she perked up. Two days later we are at the vet with dog bloat where she passed away. Today, our remaining weimaraner has diarrhea. We are switching food. There is no way I can lose another dog.