About Taste of the Wild

Taste of the Wild is a pet food company that uses premium ingredients and no additives. The company offers a wide variety of pet food flavors and has specific formulas for pets in different life stages or with dietary restrictions.

Taste of the Wild offers premium dog food at an affordable price. While it’s still more expensive than some other brands, its natural ingredients and quality assurance make it stand out.

Top Taste of the Wild Reviews

Why Trust ConsumerAffairs
How do I know I can trust these reviews about Taste of the Wild?

I have a 11.5 year-old female Standard Poodle. ... I was delighted when I saw the limited, non-GMO ingredients on Prey Turkey formula and decided to try her on it 2 years ago. Muc...

Taste of the Wild dog food

Our top pick for Taste of the Wild 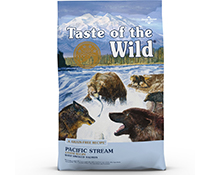 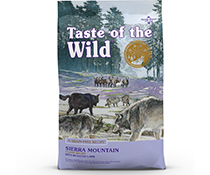 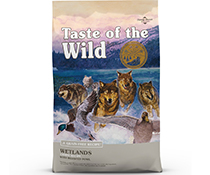 What is Taste of the Wild dog food?

Taste of the Wild dog food offers high-quality meals based on each pet’s natural diet. All formulas are made with real meat, including wild boar, smoked salmon, roasted duck and venison, to create a tastier and heartier bowl of food for puppies and dogs. In addition to natural ingredients, formulas include probiotics and are free of all artificial colors, preservatives and flavors.

For a more simpler, Taste of the Wild also offers a PREY formula that has minimal ingredients. Other pet food product lines include:

How does Taste of the Wild work?

Taste of the Wild dog food is designed to give pets a better food option inspired by the protein sources animals are meant to eat, meaning ones they ate when they were wild. The goal is to provide the vitality that nature intended.

Taste of the Wild sources all ingredients from high-quality vendors that share the same purpose and mission to provide ingredients without fillers, preservatives or artificial flavors. All meats are USDA-inspected and -approved and certified antibiotic free.

Customers can choose from a wide variety of flavors, formulas and types of pet food with Taste of the Wild. Because the benefits are similar across the formulas, most people choose based on which meat product their pet prefers.

Taste of the Wild prices

Taste of the Wild is sold by online retailers and in stores, but not through the company's website. Because of this, prices may vary between stores. In general, Taste of the Wild dog food costs around $13.99 for a five-pound bag and $48.99 for a 28-pound bag. Prices don’t differ between meats or flavors, just by size of the bag. Wet dog food costs about $2.30 per 13.2-ounce can. Some vendors, including Chewy and Petco, provide discounts for customers who subscribe for repeat deliveries.

Taste of the Wild FAQ

Is Taste of the Wild good dog food?

For customers who want a more natural food for their pets, Taste of the Wild is a great option. Its flavors and formulas are designed to mimic the ingredients and nutrients animals would receive in the wild. Prices are fairly comparable to other brands but still a bit more expensive than lower-tier dog food. With the company's strict control system and close relationship with suppliers, Taste of the Wild works hard to ensure its customers receive high-quality dog food.

Sort: Top reviews
Top reviews
Recent
Oldest
Most helpful
Filter by: Any
Any

I love Taste of the Wild. I've been using it for years and it's an excellent food. I have four Pomeranians and they all eat the Appalachian Valley. They have allergies and I find that they do very well on it. I own a pet store and I sell Taste of the Wild quite a bit of it because I do recommend it. I did have one of my customers call the 1-800 number on the back of the bag one day. She was having issues with her Dobermann that had yeast in the ears. We put the dog on Taste of the Wild and the dog's skin cleared up but the ears were still having an issue. They put her on the phone with a dietitian at Diamond and they told her that it could be the potato that's aggravating the ears. We changed the dog to the Pine Forest and the dog was fine. All the ear stuff went away.

I got a mutt that looks like a pit bull and Lab mix. We know she's part pit bull because she has that frame, but she's a little leaner. She was a stray, so we estimated that she was about eight months old at the time. She might be a little less than four years now. She's a pet and I just her to be healthy. Taste of the Wild was the one that had the lowest amount of carbs that was widely available and I've exclusively used that. I started out with the one that was mainly venison, a forest style one, but then I switched to the Southwest because it uses more pork and garbanzo beans.

I've noticed my dog gain a bit of weight, but I can't say it's attributable to the dog food because we have a three year old who is constantly hooking her up with extra food. To be fair, we sometimes hook her up too, so she may be about five pounds overweight, but she's in great health. She has a ton of energy, so it helps her maintain a high energy level and good joint health. She's a rock star on the Frisbee too.

I hope they are able to somehow formulate a total ketogenic ratio for dogs because I want my dog eating as few carbs as possible. I know it's tough to come up with that in a healthy formulation that's also maintaining a price point, but I'm happy with the results overall. I hope it contributes to her long-term health. I would recommend Taste of the Wild if you're going to get a food that's widely available that isn't like some high-end especially formulated super expensive dog food. It has a price point and it's a little bit higher than a lot of dog foods, but I appreciate the attention to the dog’s health.

I'm using Taste of the Wild cat food for my 2 cats. I just buy a bag as I need them. I also feed another little kitty outside once in a while. I've been in a little program that has been set up for me. Although, once the other feed store closed, we had to start all over again. But Taste of the wild never runs out. I'm having trouble getting other items but not the Taste of the Wild.

One time, I went to a Natural Pawz instead of going to Costco and I bought this big, huge bag of Taste of the Wild. The customer service team told me that it's the best-selling that they have as far as dog food. I noticed that when my dog, which is a half Lab and half Retriever, goes to do his business outside, it comes out the way it should. Other dog food weren't coming out too good. He likes and he loves it. I buy him a different flavor every month and a half. TOTW is a little bit pricey than other places but as long as my dog is happy, my wife is happy. It has been a wonderful experience.

As we were trying to research a replacement brand, it seemed like Taste of the Wild was a low carb brand that was reasonably priced, which was why it was the one we chose. We have Akitas which are beautiful dogs. They’re all rescues and we don’t breed them. We often only have one but right now, we’ve got an older female and a younger male. The female is 10 years old and we've had her for a long time. She's playful. I don't take her on walks anymore but she always wants to go out on a short walk. The other one is a male and he's about five. He goes with me on the long walks every day. Taste of the Wild seems like a steady player and the dogs like it. We haven’t had any issues with it and they're always interested in dinner. The dogs are very healthy. They don't have skin issues or other problems. The dogs get regular exercise and the food has been a good steady contribution to their health. We've been happy with Taste of the Wild.

Taste of the Wild is great. I've never had any problems with any of it. Salmon brand is the only one I used, and then when they started with Prey, I bought the Angus Beef and the Salmon as well.

I had a little Miniature Schnauzer and I always gave her grain-free dog food but I liked to change her diet up a little bit once in a while. I used a combination of wet dog food. Taste of the Wild was a good quality food and the dog ate it and liked it. It kept her healthy because she was 18 years old. Also, the price was good and I liked the bag it was in.

We used Taste of the Wild for years and years for a couple of dogs and then for a reason, our breeder had us get off of it for a while and go with a Purina one. I recently came back and I’m on my second bag now since I’ve gotten back to it. I used the puppy formula when the dogs started and I switched around. I used the one with the bison but I don’t do too much with the ones with the fish. We've got Springer Spaniels and they've all been healthy as horses. The dogs like it and I have no complaints. We’ve been happy with Taste of the Wild.

Taste of the Wild is a good no-brainer kind of food. I like that the food is pretty limited ingredient and grain-free. It works out pretty well for the dogs. They've never had an issue with it. It's mostly what they eat and they're healthy. If they could get the price a little down though without losing quality, that would be good.

I have been feeding Taste of the Wild to my dog and cat for many years. They both love their food... and I like that it is grain free and the ingredients are real food. My cat ate both dry and wet but I cannot find the wet so I had to make a change but she is still on the dry and loves it. Both keep their weight where it should be.. have plenty of energy and seem healthy.

Be the first one to find this review helpful
Loading more reviews...

Taste of the Wild Company Information