The Orgreenic Frying Pan: Does It Really Do That?

The company says you'll never need oil again, and no foods will ever stick 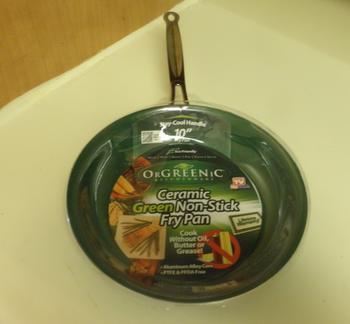 You’ve probably seen the TV ad. It shows a bunch of food sticking to a frying pan, even though the food is bathed in oil. The narrator of the commercial then asks the viewer “Is your non-stick pan a sticking nightmare? Does it always chip, peel and wear out?”

Well most of my non-stick pans do, so I thought it was a pretty good question for the guy to ask.

The commercial also went on about how foods can be fried or sautéed without the use of oil—which is always healthier—and the company claims that foods glide off the non-stick skillet like a skater on a rink, without you having to scrape the food, nudge it or peel it off.

There’s even a person in the commercial cooking an omelet, and then completely blowing it off the pan to show how slippery and non-sticky the surface really is.

This supposed super pan is called Orgreenic, and the company says its surface is made up of part ceramic and some sort of scientifically created mixture the company came up with.

The combination of the two materials is supposed to make foods slide off the pan without it sticking even a little bit, and it should perform that way up to 500 degrees. The pan is also supposed to be easy to clean because even burned foods slide off very easily, the company says.

And despite its name, the pan isn’t made with any green or recyclable materials. It’s called Orgreenic simply because it’s green. That’s the only reason.

The commercial also shows a person cooking an egg sunny side up in the green frying pan, and sliding the egg back and forth, which never happens in the non-sticks that I own.

It leads me to ask why many non-sticks are made so poorly? I mean, having foods not stick is the only purpose of the pan, so you would think its makers would at least get that one function right.

It’s like when a GPS can’t locate a certain address. Or when a dishwasher performs poorly and only washes some of the dishes. You feel like saying to the product; “What was the purpose of making you if you can’t perform your sole duty correctly?”  Unfortunately, it happens everyday with all kinds of products. 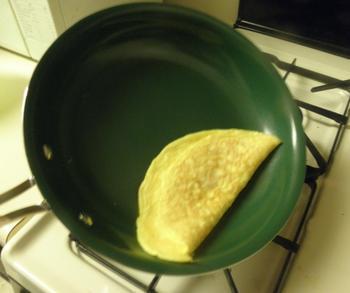 So for our next installment of Does it Really Do That, we put the Orgreenic pan to the test to see if its surface is as slick and high quality as the company says.

By using the company’s website or by calling its 1-800 number, you can order a 10-inch pan for $19.99, plus $6.99 for shipping. You can also purchase it at retail stores including Rite Aid, CVS, Wal-Mart, and Bed Bath & Beyond, but expect to pay about eight or nine bucks more.

Once I got the Orgreenic in my kitchen, I was eager to cook those foods that tend to stick to my own pans, which also happen to be some of the items that were cooked in the TV commercial.

First up: A sunny side egg cooked with no oil, butter or Pam. I just cracked the egg into the skillet and waited to see if it would stick or not.

After a few short minutes I lifted the pan and noticed the egg didn’t move.

What I sham I thought, but when I gave the egg a little nudge with the spatula, it started to slide quite easily and pretty much moved in the same way the commercial showed.

The person in the TV ad didn’t use a spatula to move the egg, and apparently when I initially lifted the pan, only a tiny portion of the egg’s corner stuck—but just barely.

I believe if I were a little more patient, and tilted the pan at a higher angle, the egg would have slid just fine before I grabbed the spatula. 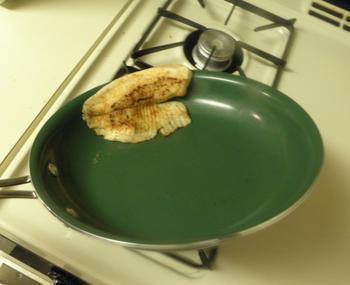 The commercial also showed someone blowing an omelet clean of the skillet, which is the test I was most eager to try. After waiting for the omelet to cook, I was thinking how difficult it’s going to be for me to blow this egg off the pan with just one puff.

When it was done, I gave the egg a blow and noticed it moved a little, but it didn’t fly off the pan like in the commercial.

Now just how many times the person in the commercial blew on the egg to move it or how many eggs were used to make the omelet is unknown ( I used two eggs). But the fact that a great deal of effort was needed on my part to move the omelet with just one breath, told me that it's possible the company exaggerated that part of the commercial a little.

The good thing however, was that the omelet slid across the pan just like the sunny side egg did. I didn’t need a spatula or any other kitchen tool, I simply tilted the pan upward and the omelet slid right off.

After that I cooked a pancake.

For some reason I still have to use a small bit of butter or Pam if I don’t want my pancakes to stick with the skillets that I own. There’s nothing worse than having to scrape a pancake to get it off the pan, which removes its nice round shape and smooth texture.

The Orgreenic pan scored well in the pancake test, as the food slid right off the surface with a gentle lift of the spatula.  It also cooked evenly, which is what you always want in any pancake.

I also gave a thin piece of fish a go on the skillet, because fish always seems to stick to pans without the proper oil, but again, no oil no problem.

The piece of tilapia that I selected glided back and forth on the pan without sticking or burning, and it cooked up very evenly without parts of it over cooking or becoming seared.

So after trying to cook a few different foods in the Orgreenic, the big question  is: Does it really do that?

Does the skillet really perform as it does in the commercial? Were there no  sticking problems and was it easy to clean? A definite yes on all fronts.

The pan is different from other non-stick pans that I’ve used because the surface seems much slicker--and its material is likely to last the test of time--because it isn’t made of that black rubbery stuff that can eventually peel off.

The Orgreenic pan’s surface is a seamless part of the pan itself, which is made pretty solidly.

In addition, the handle stayed cool to the touch, which is always convenient when multi-tasking in the kitchen, and the fact that I didn’t have to use oil, Pam or any other lubricant was a definite plus for the Orgreenic.

So all and all the pan is a pretty good buy--and the company says it will last a lifetime--which many pots do.

But in a world where TV ads and infomercials promise you the sky and only give you the ground, it’s nice to see a product actually perform like it does on TV.