Trump set to name a replacement for Mick Mulvaney at CFPB

Consumer groups don't seem to like her any better 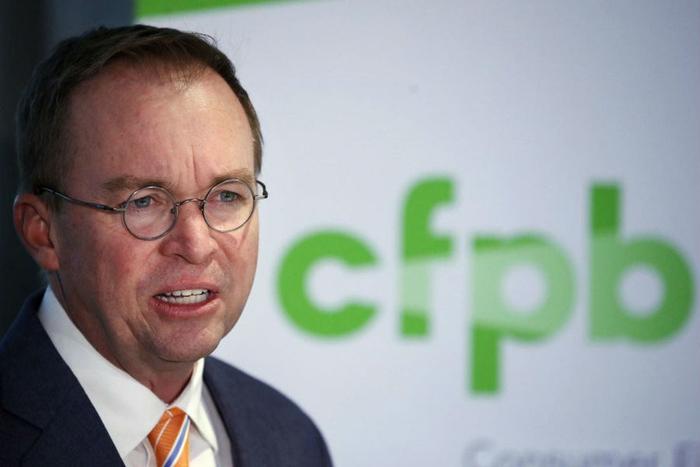 For months, consumer advocates have called on the Trump administration to appoint a new director of the Consumer Financial Protection Bureau (CFPB) to replace Mick Mulvaney.

It calls to mind the admonition, be careful what you wish for.

President Trump has, in fact, named his intended replacement for Mulvaney, who is also the president's budget director. Mulvaney has been directing the consumer agency as a second job, while angering consumer advocates for allegedly changing the agency's mission.

The prospective nominee, so far at least, isn't going over that well. She is Kathy Kraninger, Mulvaney's deputy at the Office of Management and Budget. While little is known about Kraninger, consumer groups are assuming she would follow her boss' policies.

Lisa Donner, executive director of Americans for Financial Reform, says the agency needs a director who has a strong record of commitment to protecting consumers when they do business with financial services companies. She claims this nomination aims to keep the CFPB "hobbled."

Consumer groups have been highly critical of Mulvaney, who as a member of Congress twice voted to abolish the CFPB. In his last appearance before Congress, he urged lawmakers to take direct control of the agency, saying it has too much power and hasn't been held accountable.

Not returning to original mission

Consumer groups say that the nomination of Kraninger will likely mean the CFPB won't go back to its original role of aggressively protecting consumers' interests.

“This is nothing more than a desperate attempt by Mick Mulvaney to maintain his grip on the CFPB, so he can continue undermining its important consumer protection mission on behalf of the powerful Wall Street special interests and predatory lenders that have bankrolled his career,” said Karl Frisch, executive director of Allied Progress.

Frisch said the Senate should immediately schedule confirmation hearings and reject Kraninger's nomination, claiming she has "no relevant experience."

According to Bloomberg News, most banking industry lobbyists it consulted had never heard of Kraninger, although she did get an endorsement from Rob Nichols, president of the American Bankers Association.

The CFPB was established under the 2010 Dodd Frank Act and given a large degree of independence to shield it from political pressure.

Its creation was proposed by Harvard professor, and now Senator, Elizabeth Warren (D-Mass.), and its first director was Richard Cordray, who aggressively pursued consumer issues as the attorney general of Ohio.