Johnson & Johnson isn’t the only one who uses talc. Is it time to ditch all powdered makeup? 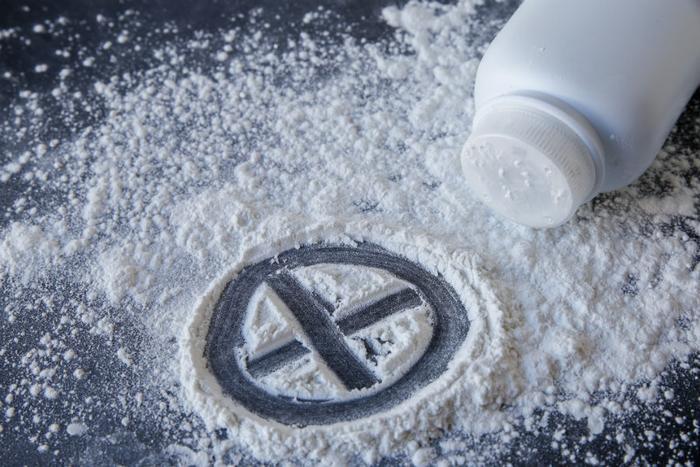 To attempt contouring, the Kardashian-esque art of using heavy makeup to sculpt the face shape, M.A.C. Cosmetics directs shoppers to a shimmery powder that's formulated with something it describes as “M.A.C. Mineral Complex.”

For a more natural look, Clarins sells a translucent powder that blurs away imperfections and shine thanks to ingredients vaguely listed as “Light-Optimising+” and “Plant-based Micropatch®.”

And for setting concealer in place, Too Faced tells shoppers to dust its “vegan” and “cruelty-free” Born this Way Powder across the face.

Loose or pressed powder makeups can feel like miracle products for women who wear them daily, but the ingredients aren’t as magical as some top-dollar brands like to suggest.

For the above products, along with most other cosmetics in powder form, talcum powder is a key ingredient. As new evidence is emerging that cosmetic-grade talc can be contaminated with asbestos, some researchers are questioning whether applying talc to the face is still a wise idea.

Neither Clarins or Estee Lauder, the parent company of Too Faced and M.A.C, have answered inquiries from ConsumerAffairs about what independent testing or sourcing they may use on their own talc to ensure it is asbestos-free.

But those brands are hardly alone. Nearly every makeup in powder form is guaranteed to list talc in the fine print.

“Talc is frequently used in makeup because it creates that matte, soft, silky texture on the surface of the skin,” Jackie Bowen, the executive director of the Clean Label Project, an independent watchdog that tests consumer products for toxins, tells ConsumerAffairs.

The benefits of cosmetic talc are well understood by the makeup industry, but its potential dangers are unknown thanks largely to the efforts of Johnson & Johnson. The company has dominated the talc market for decades with its iconic Baby Powder.

Asbestos is a known carcinogen and lung irritant with no safe level of exposure. Diseases linked to asbestos kill an estimated 15,000 Americans every year. But the United States has never outlawed asbestos fibers from either baby powder or makeup.

“There is no law that prohibits the presence of asbestos in cosmetics,” warns the Environmental Working Group, which has called on Congress for years to establish tougher regulations on cosmetics.

“The Food and Drug Administration encourages companies to carefully select talc mines to avoid asbestos contamination, but it does not have the power to regulate products that contain talc,” the group adds.

The new Reuters investigation traces that absence of regulation to lobbying work done by Johnson & Johnson. The company is now responding with an ad campaign to defend the safety of its products.

Talc and asbestos are frequently found together in nature. As Reuters’ Lisa Girion reported in the blockbuster investigation last week, Johnson & Johnson had regularly contracted labs to ensure that it was sourcing safe talc.

But lab tests from 1971 through the early 2000s detected trace amounts of asbestos in some instances.

Rather than issue a recall, Johnson & Johnson instead reportedly hid the unfavorable tests from the the Food and Drug Administration (FDA) and consumers. The company later convinced the FDA to let the makeup industry police its own products for traces of asbestos.

“Whether it's loose powders, or even hard powders that we apply with a brush like bronzers and blushes, we have a very real reason to be concerned about the potential of airborne asbestos,” Bowen adds.

The first talc in asbestos lawsuit

It was in 1999 when a massage therapist named Darlene Coker came to personal injury attorney Herschel Hobson for help. Coker was dying from mesothelioma, a disease that is a signature of exposure to asbestos. It typically afflicts industrial workers on ships or in factories. Coker had never worked in such a setting.

Her lawsuit was the first of what would eventually become a trend. In recent years, nearly 12,000 lawsuits have been filed against Johnson & Johnson claiming that talc can cause ovarian cancer, which is a much more common disease than mesothemilia. The lawsuits also frequently name Imerys SA, the world's leading talc supplier, as a plaintiff. (The firm declined to comment in the Reuters report).

Researchers have not yet determined whether it’s talc itself that is allegedly causing ovarian cancer, or if it’s the potential asbestos in talc that’s the culprit. But for mesothelioma, asbestos exposure is the only known risk factor. When Hobson’s sick client told him about her frequent use of baby powder in 1999, he was convinced he found his answer.

“That was the first suspicion he had. He knew from his education and background that talc is frequently contaminated with asbestos,” Tina Bradley, a personal injury attorney who works as a partner at the same law firm, tells ConsumerAffairs.

The FDA currently requires all drugs that use talc to undergo testing to ensure asbestos does not exceed 0.1 percent of its contents.

But that only applies to pharmaceuticals. For cosmetics, it’s a different story. Johnson & Johnson and the makeup industry trade organization the Personal Care Products Council convinced regulators decades ago to let the cosmetics industry essentially self-police for asbestos, as the Reuters report details.

As a result, the FDA “has never limited asbestos in cosmetic talc or established a preferred method for detecting it,” the report adds.

The Reuters report and the litigation over the the issue has focused on Baby Powder and Shower to Shower gel, both Johnson & Johnson products. But some women who handle asbestos litigation are shunning all talc-based powders.

Bradley, the asbestos and personal injury attorney, says she once made her daughter return new powdered face makeup that she had brought home back to Walgreens.

“I don't use any kind of loose powder,” Bradley tells ConsumerAffairs. “I guess I've done this kind of work for too long. I don't want anything to go up my nose. I don’t care what kind of dust it is."

Bradley isn’t the only one with such concerns. Last year, a mother working at a different law firm that handles asbestos lawsuits decided on a whim to send her daughter’s makeup from Claire’s to a lab.

The woman said the tests revealed that samples of Justice, Claire’s line of makeup, were contaminated with asbestos.

The findings were then replicated by a local television news station in North Carolina. Claire’s swiftly issued a recall last year and promised to follow through with its own testing. The retailer shortly after assured consumers that its makeup samples were “asbestos free.”

Unconvinced, the public health nonprofit US Public Interest Research Group (US PIRG) decided to follow through with lab testing of its own.

The new results were disturbing. According to lab results that the group made public this past March, some Claire’s makeup samples were contaminated with “high levels” of asbestos.

“No one adds pure asbestos to makeup. However, asbestos can occur naturally in talc, and talc is commonly added to cosmetics,” U.S. PI.R.G explained of its findings.

Claire’s disputed the results. Though lawmakers Rep. Frank Pallone and Sen. Dianne Feinstein called for an FDA investigation into the presence of asbestos in children’s cosmetics, the issue otherwise quickly disappeared from headlines.

Soft mineral powders are a popular tool in makeup kits. Consumers with oily or acne-prone skin are often advised to choose powdered foundation over liquid, factors that can make the products especially appealing to younger women.

But loose powders are known to fly around during application, and it's unclear how much of the product a consumer may end up inhaling.

In 2012, a team of researchers set out to answer that question. The researchers applied loose mineral powder makeups to a mannequin that had an artificial “throat” and “lungs” built inside of it.

Writing in the journal Environmental Health Perspectives, the research team concluded that application of “nanotechnology-based cosmetic powders,” or extremely fine cosmetic powders, “has a strong potential to result in inhalation exposure.”

It’s not just asbestos that consumer groups and researchers have voiced concerns about. The Scientific Analytical Institute, one of the labs that was hired to examine Claire’s Justice makeup for asbestos, said last year that its tests also detected the heavy metals barium, chromium, lead, and selenium in Justice products. Such chemicals can be toxic when introduced into the bloodstream.

And numerous brands of liquid makeup have also received low scores from groups like the Campaign For Safe Cosmetics, a Breast Cancer Prevention Fund campaign that evaluates makeup for toxins.

Regardless, U.S. PIRG, the nonprofit that tested Claire’s Justice makeup earlier this year, advised consumers afterward to specifically avoid any cosmetic that is powdery, shimmery, or sparkly.

“Those are the products that tend to use talc as a main ingredient, and it's the talc that can be contaminated with asbestos,” the group said.