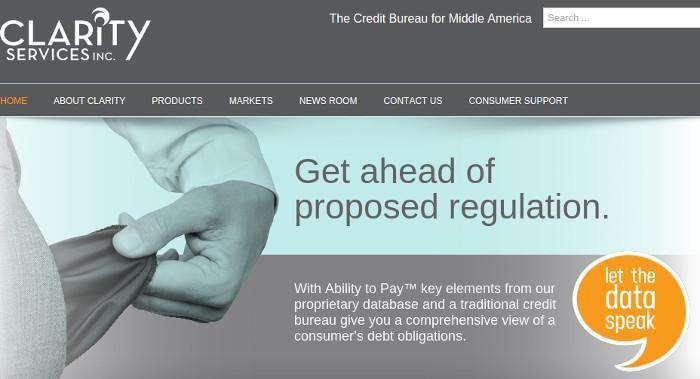 The company, which bills itself as "The credit bureau for Middle America," is being ordered to clean up its processes and pay an $8 million penalty.

“Credit reporting plays a critical role in consumers’ financial lives,” said CFPB Director Richard Cordray. “Clarity and its owner mishandled important consumer information and failed to take appropriate action to investigate consumer disputes. Today, we are holding them accountable for cleaning up the way they do business.”

Clarity Services, Inc. is a Florida-based credit reporting company that focuses on the subprime market. Tim Ranney is the president, chief executive officer, and founder of the company, which compiles and sells credit reports to financial service providers, such as payday lenders.

Clarity purchases credit reports from other credit reporting companies, supplements these reports with other data, and then resells the repackaged reports to be used in underwriting decisions. Companies that purchase Clarity’s consumer reports are often lenders making small-dollar loans to consumers who have thin credit files.

The Fair Credit Reporting Act requires that access to consumer reports be limited to those with a “permissible purpose,” such as a lender making an underwriting decision about a consumer. That's intended to protect consumers' privacy.

The CFPB found that Clarity and Ranney violated the Fair Credit Reporting Act by illegally obtaining the consumer reports of tens of thousands of consumers — without a permissible purpose — for use in marketing materials for potential clients. The company also failed to investigate consumer disputes, including consumer disputes about unauthorized credit inquiries.