Simmons Bedding Company is a manufacturer best known for memory foam and hybrid mattresses. Simmons’ Beautyrest line of mattresses has features like pocketed coil technology and ventilated fibers for maximum airflow. Simmons and Beautyrest mattresses are available for purchase online and through local retailers.

Simmons mattresses are available in a variety of firmness options in all price ranges. Provides a 100-night in-home trial and free white-glove delivery services, but some customers complain about durability issues.

Why Trust ConsumerAffairs
How do I know I can trust these reviews about Simmons Mattresses?

Beautyrest is a very high quality product that comes in numerous styles and firmness options that cover a wide-range of sleeping needs. The Beautyrest brand is durable and comfortable...

I bought a Beautyrest mattress. I've had this product for 6 weeks now, my horrible neck and headaches have been reduced by 80%. I've never in my life slept so comfortably. Thank y...

Simmons is one of the most recognizable brands in the mattress industry. Simmons offers pocketed coil mattresses and hybrid mattresses and its flagship product, Beautyrest, comes in several variations. There are a variety of options for firmness, cooling technology and layers specifically designed for ergonomic comfort.

Simmons' most popular mattress is its innerspring mattress. The company recently expanded into hybrid mattress options as well, pairing its pocketed coil designs with several foam options for different comfort needs. Simmons provides complimentary white-glove delivery services that include the removal of an old mattress. It doesn’t deliver to Alaska or Hawaii, but shipping is free to anywhere else in the U.S.

Depending on the line, Simmons mattress models start between $249 for a Simmons twin Memory Foam to $3,999 for a king Beautyrest Black. Customers can finance their purchases directly through the company's website using Affirm. Approved customers can get loans for three, six or 12 months.

Simmons mattresses come in a variety of comfort levels and with different features, including memory foam and airflow technology to help regulate body temperature. 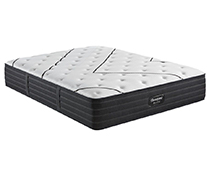 Our top pick for Beautyrest 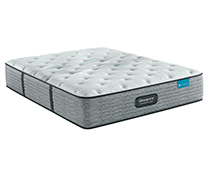 Designed with pocketed coil support system, pressure-relieving foams and sustainable fabric to keep you cool and comfortable all night. Available with a plush pillow top or a classic top for firmer support. Compatible with most frames, foundations and bases. 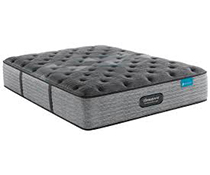 Combines an innovative coil design and support system with advanced pressure-relieving foams. Includes a fabric cover made out of recycled plastics from the ocean. Available in medium and plush comfort levels. 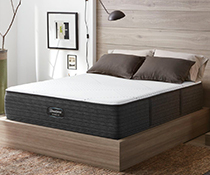 Is Simmons a good mattress?

I bought the Beautyrest PressureSmart just after Christmas 2021 for $200 less than the original price of $1,299.99. This mattress does not have a pillow top, the sales lady said that this mattress was much better than the $700 Beauty Rest with the pillow top. First night it was way too stiff for me to sleep on. After much bouncing and rolling around on it, (which is what they told me to do to 'break' it in. Now 6 months later it sags pretty badly. When you sit on the edge it really sags down, not like the pillow top that hardly moves. Both mattresses are medium firm.

After contacting the company Mattress Firm and explaining everything, I followed their instructions on checking the mattress for sagging. Of course using a broom stick with their measurement tool really doesn't show anything. They did not want pictures of a person laying on the mattress to show how the mattress really sagged. I will not buy from MattressFirm or get another BeautyRest mattress ever again. A total waste of $1300 on a mattress that is worthless.

My Husband and I bought a Simmons Danica Shores from a local furniture shop on November 14, 2017. This mattress worked fine for the first 18 or so months. It then started to sag on each side. The furniture store picked it up when we bought another mattress to replace this one so they could check out the issues we had. A call this afternoon from the local furniture company is the reason we will NEVER, EVER buy a Simmons product again. The mattress must be 1.5 inches lower when a board is placed across the mattress from side to side and if not, it is NOT under warranty cause they say there is nothing wrong with it. If the mattress is sent off for warranty and nothing is found wrong with it, we would have to pay the shipping to Simmons to have the mattress checked. Simmons has poor products and horrible warranties. BUYER BEWARE! Wish we had read these reports from consumers BEFORE we ever bought the mattress.

We purchased a Queen size Beautyrest Pressuresmart mattress in Chandler AZ upon trying one of their perfect models on the floor. This model seemed firm and comfortable for both of us, accommodating our side and back sleeping habits. Salesman was nice and friendly and we had the mattress delivered after a few days. Upon receiving it and paying attention to the way this mattress was made we discovered a considerable lump in the middle of it. We requested an exchange, which arrived yet a few days later. This time, the delivery company rang the bell twenty minutes earlier than announced in an e-mail and on a direct call from them. The two 'handlers' were very rough with the new mattress, leaning it outside our door at an angle that could have damaged it. We refused to take it and yet another mattress arrived a few days later.

This is our third mattress by now... We took it in, set it on the bed and slept on it, only to discover that this one had too a lump in the middle! At $1,000 a pop we definitely expected better quality! We called the store which sold us the mattress (has the Firm name in it) and requested a refund based on the defective nature of this mattress. We were told to take some pictures, which would be forwarded to the District Manager of that store which would make the determination. Three entire weeks went by without hearing anything from them, then, upon visiting the store we were asked to take pictures AGAIN (!!!) showing a depression of 1.5 inches. We did just that with the help of a straight, long ruler and sent them away to the store.

A few days later we were told that the Manufacturer deemed our mattress to be within the norms of their manufacturing and would NOT take the mattress back. The District Manager of the Firm store, however, let us know that they will take our mattress back for $99.00 and refund us the rest. All in all, although we're thankful that the Firm store took the mattress back, we are NOT happy that we had to pay $99.00 for picking up their defective mattress. We are never going back to the Firm store and/or buying again a Beautyrest product. Shame on them! Save your money and get a much better mattress somewhere else for less.

The mattress was great for 3 months, then developed ridges and sinkhole in middle. Back pain keeps me awake most of night. Inspector took pics, looks fine till lie on it, so store says it’s fine!! A hole with a tarp over it looks fine too till you step on it. So unfair! Had previous Simmons for 18 years. Either Boscov's carries defective merchandise or Simmons has become a terrible company.

I have a Beautyrest Mattress with a 10 year warranty. I even got talked into buying the mattress protector to make sure my warranty stayed in effect. At 3 years, a spring or something broke inside my mattress. Should be no big deal right? Ha. They declined my claim because my bed frame, "which is also a Simmons," only has four boards instead of five. My box springs and mattress look brand new, no stains or nothing. Their warranty is a total scam, plus the purchase of the mattress cover.

Material is showing signs of wear at two months old. Bottom cushions won't stay put with the unused center cushion being the first and fastest cushion to move out and some times falls completely off the sofa. The Simmons company does not respond to emails. They have no warranty information on their website, although it can be found with a specific search, and is claimed to be one year. I do not recommend this company's products.

Poor customer service and communication. I was trying to receive a new mattress under my 10 yr warranty. They wouldn’t honor it, said it was normal wear and tear. Even though it slopes so badly on both sides, I practically slide out of bed. I should have paid more for a better mattress. Warranty means very little. I’m so disappointed with this company.

I recently put in a claim on a (6) year old Simmons Beautyrest Legend mattress that was badly sagging. There is no way to speak to anyone via the phone. You have to chat online with warranty dept. but the chatting online is always down. This was a top of the line mattress at the time and expensive... Boy what a joke that was. The mattress started sagging into its fourth year to a point that ruined my sleep and gave me back problems. They state that their warranty standard is at least a 1.5" of sagging which is ridiculous. If you waited for an 1.5"+ of sagging you would need back surgery after that. I would never ever recommend a Simmons Beautyrest mattress or Mattress Firm store to anyone.

We have this mattress a chance, but it’s just awful. It’s the Fairview Plush mattress and a Cal King size. After a night it makes a divot that is super uncomfortable. We rotate it, still bad. After a year, we are just going to buy something else and throw this $2000 mattress away.

I purchased a Simmons dr hard queen mattress 3 years ago and it's already defective. It shows collapsing and springs showing around shoulder height on bed. When we contacted simmons they told us the warranty was void because it was soiled and that affected the mattress. I can't see how human sweat can cause a mattress to come apart like this. People sometimes sweat at night. We had mattress covers on our bed. I don't ever recall a mattress coming apart like that and for the reasons they claim. I phoned their warranty line but didn't receive any real assistance. They just kept saying it was soiled and that voided warranty. I will never purchase a simmons mattress again.