Scam alert: Virgin Airlines is not giving away a year's worth of free flights on Facebook

Don't fall for this latest attempt at a like-farming scam 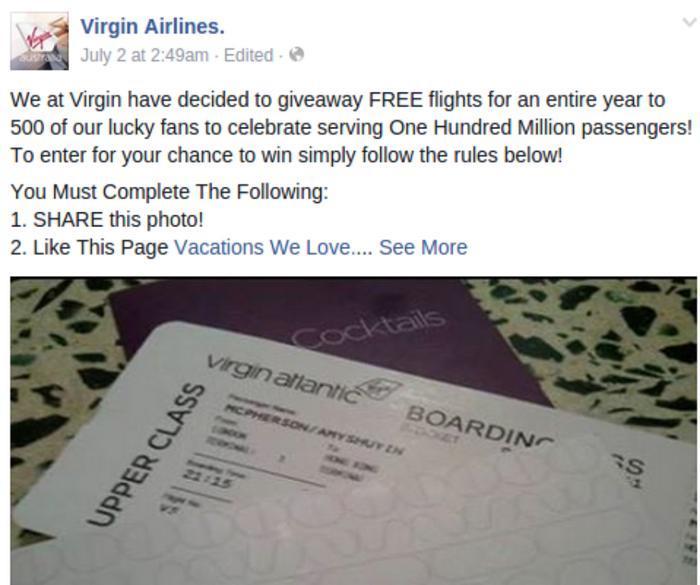 Don't do it. There are no tickets, there won't be any winners, and Virgin Airlines didn't create that Facebook page – it's nothing but the latest attempt at a “like-farming” scam.

Like-farmers start pages and fill them with content dedicated to collecting as many “likes” or “shares” as possible in the shortest amount of time in order to drive up the page's popularity ranking. Once the page rank is high enough, the like-farmer removes the original page content and replaces it with anything from ads for scam products to dangerous malware infections — or outright sells the page to another scammer on the black market.

And this alleged Virgin ticket giveaway is no different. The post is from a Facebook page named “Virgin Airlines.” — with a period at the end of the name.

That alone is enough to indicate a fake page. Like-farmers often (though not always) use unnecessary punctuation to distinguish their page name from an already existing one. So if you see page names such as “Walt Disney World.” or “Six Flags.”, you can safely assume the real Disney or Six Flags companies aren't behind those pages.

As of July 6, that “Virgin Airlines.” Facebook page has only one post on it: a photograph of a Virgin Atlantic boarding pass and two menu or cocktail-listing pamphlets, plus the following text (all errors lifted verbatim, except the live link has been disabled):

We at Virgin have decided to giveaway FREE flights for an entire year to 500 of our lucky fans to celebrate serving One Hundred Million passengers! To enter for your chance to win simply follow the rules below!

(That post has been edited; the original said that winners would be contacted on July 6.)

So far the scam appears to be successful – in the sense that the like-farmer is indeed harvesting plenty of likes, shares, and comments. As I type this early in the afternoon of July 6, the post on the “Virgin Airlines.” page has slightly over 31,000 “likes” and 56,000 “shares,” with those numbers rising every few minutes. (When I started typing this two hours ago, both numbers were lower by several thousand.)

But the scammer behind that post is trying to fertilize two Facebook like-farms, not just one. After all: in addition to sharing the “Virgin Airlines.” photo, it also tells you to visit and “like” another page called “Vacations We Love.” (again with a period at the end of its name) and leave a “thank you” in the comments.

“Virgin Airlines.” and “Vacations We Love.” both identified as a “Community” in their Facebook-page cover photos, and if you visit a Facebook “Community” page called “Vacations We Love” with or without punctuation in its name, you'd expect to find people discussing their various vacation experiences, right? “If you go to New Orleans, check out that Creole place on Bourbon Street! I had a great time there” or even “If you go to New Orleans, don't bother visiting that Creole place on Bourbon Street. It's nothing but an overpriced tourist trap.”

But you'll see no such discussions on “Vacations We Love.” There's only one post on the page – a notification that the page updated its cover photo. That photo (and post) shows an airplane landing at sunset, overlaid with the phrase “KEEP CALM AND FLY TO YOUR LOVE” – and the 1,400 comments on that thread aren't people talking about their vacations, merely people posting the words “Thank you” over and over and over again.

That collection of repetitive, non sequitur comments is another sign indicating that a Facebook page is actually a like-farm.

If it sounds too good to be true, it is

Even if you're not familiar with like-farming scams, and unlikely to notice such subtle cues as unnecessary punctuation, you should still bear in mind the classic anti-scam rule “If it sounds too good to be true, it is.” The idea that anybody – let alone 500 different people – could win such a valuable prize by merely clicking on a couple of Facebook icons sounds too good to be true.

Indeed, that “Virgin Airlines.” post doesn't even make sense from a corporate/promotional/advertising perspective. The like-farmer said that Virgin is giving away free flights to “500 of our lucky fans” — as opposed to, say, “500 of our frequent fliers” or “500 people who fly with us in the next week” or any variant of “500 actual customers who paid us actual money.” But neither Virgin nor Disney nor Apple nor any other company is going to give away hundreds of thousands of dollars' worth of its own product to random Facebook users, no matter how many Facebook pages those users “like” and “share.”