How to deter burglars

The connection between yard signs and crime

Yard signs are commonly used to deter home burglars, but it can be hard to quantify the effectiveness of the signs as deterrents. ConsumerAffairs wanted to know what types of homeowners post signs and which type of sign you should post to keep your home safe.

The ConsumerAffairs research team surveyed over 700 people. We asked respondents how they perceive the threat of burglary and how they protect their homes from thieves. We also asked them to rank the effectiveness of specific deterrent signage.

We compared our data with a 2013 study conducted by The University of North Carolina at Charlotte’s Department of Criminal Justice & Criminality. In the study, researchers interviewed over 400 convicted burglars about their motivations and target selection as well as factors that deterred them.

The data was evaluated for averages, commonalities, differences and trends. 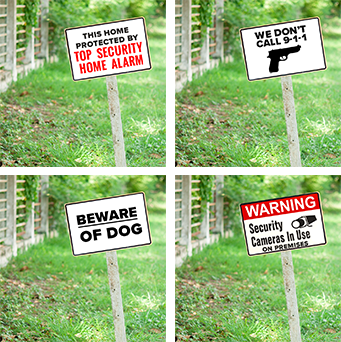 Home alarm signs are most popular generally, but not among all demographics.

Over 34 percent of posted signs indicate the use of a home alarm. However, the study shows people age 18-25 are most likely to post a sign alerting intruders to the presence of a dog in the house, and individuals over 65 posted signs indicating that the owner possesses a firearm. Residents of rural areas most often chose signs referencing guns as their deterrent. 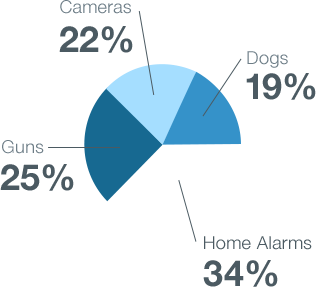 The people who are most concerned don't actually put up the most signs.

Research shows people’s residence location and age is more predictive of whether they will post a deterrent sign than their degree of concern. While people living in urban communities worry twice as much about home burglary as those living in the suburbs, only 46 percent reported using a sign compared to 52 percent of suburbanites. 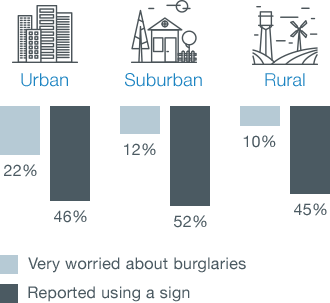 Beliefs about which signs are most effective is divided down party lines.

Forty percent of respondents felt signs about weapons in the home were most effective. Interestingly, that number edged up when we only considered Republicans, and it jumped by eight percent when we only considered Independents’ perceptions. An even bigger difference between the general population’s perception and Democrats’ perception. Democrats were nearly twice as likely to indicate they believed a security camera sign was an effective deterrent as compared to the survey group average.

We asked people which message they thought was most effective 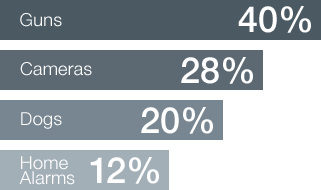 Most effective signs according to political parties

For criminals, avoiding eyes - real or electronic - is top priority.

Burglars told researchers* being caught on camera, being seen by a person, tripping an alarm or startling a dog most often deterred them from striking a particular home. To avoid detection, thieves usually commit crimes when no one is home. In fact, 72 percent of burglaries happen when nobody is home**.

Perception of the effectiveness of burglary deterrants according to burglars:
% of sample indicating they considered these factors 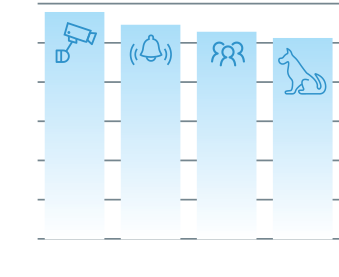 Where do burglars look first?
According to interviews with reformed criminals, home invasions typically start at an unsecured entry point, usually a door or window. Bathroom windows are especially vulnerable since homeowners often leave them unlocked. Be sure always to lock sliding glass doors, especially if you have a tall privacy fence. Once inside, burglars tend to hit the master bedroom first, then home offices, living rooms, kitchens and garages.
What attracts burglars to homes?
Burglars like easy marks and quick escapes. Anything that’s quick to sell — jewelry, electronics, guns, cash — could be attractive. Since it’s riskier to burglarize with people nearby, homes that are unoccupied for stretches of time often become targets.

For instance, a pile of newspapers, trash cans in the driveway and an overgrown lawn make it look like the house could be unoccupied and signal a low-risk opportunity to burglars. Creating the appearance that a person is home (leave the radio on, for example) helps deter burglars. For more, read about how to prevent break-ins.

Do burglars put markers outside houses?
Criminals won’t just burglarize any house. Before deciding which house to target, they usually troll through different neighborhoods looking for low-risk opportunities. Sometimes, burglars visit a neighborhood several times before striking. This allows them to study the patterns of when people are home and when they aren’t.

A burglar might put a signal or marker outside a particular house to indicate it is a good or bad target. It appears that burglars put markers outside houses more commonly in the United Kingdom than in the U.S.

If you suspect a thief is casing your place, contact your local police station and alert your local neighborhood watch.

Do burglars really avoid houses with dogs?
Some criminals avoid houses with dogs, while others aren’t much bothered, according to a survey of 86 people incarcerated for burglaries (via KTVB in Idaho). Most thieves avoid loud barking that could bring attention. Unfortunately, some burglars have been known to manipulate or harm an animal to get what they want.
Where should home security signs be placed?
It would be best if you placed home security signs on doors and windows. You can also find security signs with messaging about dogs and weapons in addition to a yard sign or door sticker from branded home alarm companies.

Visible signals that a house is being monitored or under surveillance appear to be the best way to deter a burglar. Theft-deterrent signs with messages warning about dogs and weapons also have some effect. Security cameras, real and fake, have some impact as well.

Next, research ways to secure your home, such as maintaining a clean, well-lit yard, reinforcing entry points and installing an alarm system.

Did you find this article helpful? |
Share this article
Want to learn more about home security?Check out the Home Alarm and Security Systems Guide

Jami Barnett, Ph.D., is an experienced researcher, and she believes consumers have a right to clear and honest information about products. In her role at ConsumerAffairs, she thoroughly researches products and companies by interviewing experts, reviewing research studies, reading governmental regulations and investigating customer service responses. Her work gives consumers the information they need to make smart purchasing decisions.