Timeshare salesman says he 'lied for a living'

Read this before you take a family vacation 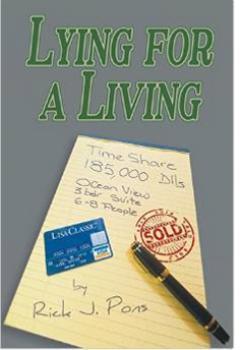 If you are headed for a popular resort on vacation this summer, chances are you will encounter an attractive and aggressively friendly young man or woman who offers you a free gift or meal that has just one tiny string attached.

You have to submit to a timeshare pitch.

What could be the harm? After several hours of intense pressure, you might emerge as the new owner of a timeshare, and just like someone who wakes up after a bender with a new tattoo, have no idea why you agreed to it.

Rick Pons understands. He's just published a book, “Lying For A Living,” in which he lays out what he says are some of the seedier aspects of the way some timeshare companies operate.

Pons says he was recruited into timeshare sales in 2003 in Cancun, Mexico – a competitive venue for the timeshare business. His book recounts his experiences as he got deeper into the business, until he finally became disillusioned and quit.

“I first started in marketing where my main responsibility was to pre-qualify couples and convince them to attend a sales presentation,” Pons told ConsumerAffairs. “It may sound simple but it´s actually almost as hard as actually selling them a timeshare in the sales room.”

Pons describes the life of a timeshare salesperson as consumed with “fear of rejection, the moral dilemmas, the harsh work conditions, the constant backstabbing” from everyone around you.

“It´s really not a job for everybody,” he said, in something of an understatement.

If you have to lie, you lie

Pon describes the timeshare sale as an emotional process in which the sales team works hard to get the prospect – usually a couple – to like and trust them. If you have to lie to build the right rapport, well – you lie.

In his book Pon diagrams a typical hard-sell timeshare operation. It starts with a person called the “liner,” who often is the first to make contact with the target.

“At this stage of the presentation the liner's main responsibility is to show the couples a good time,” Pons said. “You do this during the breakfast and the tour that follows while at the same time you obtain as much information about them as you can.”

The information is passed along up the ladder to other team members until it reaches the closer. This is where the rubber meets the road.

Pons says very often a couple will establish good rapport with the first members of the sales team but will abruptly sour on the individual doing the close. That's when others are sent in to salvage the sale and they take no prisoners, using tactics Pons names as “Pitting the Couple Against Each Other,” “Humiliation,””Pity,” and promising the unit will pay for itself by “Renting it Out.”

Pon makes clear that he is not painting all timeshare operators with the same brush. While owning a timeshare probably makes no sense for the vast majority of people who end up buying one, Pons insists there are people for whom they do make sense.

“There are some good deals out there, if You know how to get them,” Pons said. “Just like in any other industry there are good ones and bad ones.

The bad ones, he says, will lie – about almost everything. Pons says they even lie about whether or not they are a timeshare, which he says has now become such a loaded term that no one likes to use it anymore.

Instead, they may be called "vacation clubs," "all inclusive clubs" or "fractional ownership clubs."

Pons believes the timeshare industry, after some 40 years, is being forced to evolve. With competition from newer, higher quality resorts, the worst players are dropping by the wayside.

Still, when you're on vacation, better keep your guard up.

“Timeshares sell dreams, the dream of a perfect family vacation and in most cases they do it when the families are in relax mode, when people are on a vacation and their defenses are down,” Pons said.