Trends and statistics about identity theft

According to the Federal Trade Commission's “Consumer Sentinel Network Data Book,” the most common categories for consumer complaints in 2021 were:

“Government documents or benefits fraud” was the most prevalent type of identity theft case — more than 395,000 people reported that someone submitted a fraudulent government document under their name.

As the COVID-19 pandemic continues in 2022, the FTC also continues to send out warnings of scams targeting Americans working and studying from home.

Similar warnings come from the business sector as well. “When you are working from home, you are not behind the castle walls anymore,” said John Hammond, a cybersecurity researcher at the security firm Huntress. “You are working with your own devices, away from the safe perimeter of corporate networks.”

This situation creates an easier and more lucrative path for attackers to launch ransomware. From 2019 to 2020, the U.S. experienced a 311% increase in victims, with a total payout of $350 million. Global ransomware attacks then nearly doubled in 2021 compared with 2020, increasing by 93%, according to the NCC Group’s 2021 Annual Threat Report.

Sophos’ State of Ransomware report showed a similar trend, with 66% of the organizations surveyed seeing ransomware attacks in 2021. For context, only 37% of respondents reported that they were hit by ransomware attacks in 2020. Experts believe one important contributing factor to the popularity of this kind of attack is the number of people still working from home.

Register for the free FTC Consumer Alerts blog to keep up with recent tips, advice and scams.

According to the FTC, fraudsters are still at work creating scams perpetuating virus-related fear. Texts and robocalls concerning vaccines, COVID-19 cures and antibody tests are prevalent. Some scammers are even impersonating FTC staff to tempt people with nonexistent awards or funds related to the pandemic.

The U.S. Department of Justice shut down hundreds of bogus websites in the first year of the pandemic, but plenty are still active. These sites are often disguised as government agencies or humanitarian organizations and promise coronavirus tests, relief payments or outright cures.

They look legitimate, so it’s easy to click, but a click provides hackers the means to start phishing email campaigns and implant malware, all in an attempt to get personal and private information.

For example, a link that seems like it should lead you to a map of “COVID-19 cases near me” could infect your phone or computer with spyware or ransomware. Remember to visit the Centers for Disease Control and Prevention or World Health Organization for safe, accurate information about coronavirus trends and statistics.

According to the U.S government, the IRS and Equifax, common COVID-19-related scams in 2021 included:

5 cybersecurity tips for working from home

Now that more Americans are working from home indefinitely, we asked the ConsumerAffairs Information Security team for some tips on how to stay safe online.

For more on how to keep your devices safe while socially distancing or sheltering in place, the ConsumerAffairs Information Security team recommends visiting sans.org and staysafeonline.org.

“The fact the number of breach events in Q1 represents a double-digit increase over the same time last year is another indicator that data compromises will continue to rise in 2022 after setting a new all-time high in 2021,” Eva Velasquez, President and CEO of the ITRC, stated on the organization’s website. “It is vital everyone continues to practice good cyber-hygiene, businesses and consumers, to help reduce the amount of personal information flowing into the hands of cyberthieves.”

Phishing and ransomware remain the top root causes of data compromises. The health care, financial services, manufacturing/utilities and professional services sectors experienced the most compromises in the first quarter of 2022.

Some of these attacks have become national news and impacted major companies. Although these breaches may not directly target consumers, they do affect their daily lives.

Cyberattacks are more ambitious
According to the CrowdStrike 2022 Global Threat Report, e-crime groups are still the primary source of attacks, making up nearly half of all observed criminal cyberactivity in 2021.

However, there is a growing trend of targeted cybercrime, defined in the report as “state-sponsored intrusion activity that includes cyber espionage, state-nexus destruction attacks and generating currency to support a regime.”

Assaults on U.S. infrastructure
The infamous SolarWinds hack began in 2020 but had repercussions that carried into 2021, and this was followed by the Colonial Pipeline breach, signaling a larger trend of hackers targeting U.S. infrastructure.

The infamous SolarWinds hack began in 2020 but had repercussions that carried into 2021, and this was followed by the Colonial Pipeline breach, signaling a larger trend of hackers targeting U.S. infrastructure.

As a response to these growing threats, President Joe Biden issued an executive order on improving the country’s cybersecurity and earmarked $9.8 billion of the 2022 federal budget for civilian cybersecurity activities, such as the IT systems and networks used by the federal government. In this budget plan, the Department of Defense receives a separate $4.3 billion for its own cyber operations, and an additional $4.3 billion was allocated to providing local grants for private infrastructure that impacts the everyday lives of Americans.

“IoT vulnerabilities have been discovered and exposed across many industries,” wrote Oleksii Tsymbal, Chief Innovation Officer at MobiDev. “These vulnerabilities threaten sensitive data as well as personal safety. Without a doubt, the Internet of Things is a prime target for hackers in 2022, and any organization that produces or uses these devices needs to be prepared.”

Just because IoT devices are small does not mean cybercriminals treat them as unimportant. The best advice is to update your devices continually and change passwords frequently.

Formjacking has been around for a while, but it's still in use
In 2021, cybercriminals still employed formjacking as a means to take in millions of dollars each month by hijacking credit card data from online payment forms. It pays to be vigilant when making purchases online by making sure you are familiar with the company you’re buying from.

Ransomware is a serious threat in 2022
Ransomware payouts increased dramatically in 2021, with one case reportedly causing the victims to pay out an astonishing $50 million. To incentivize the victim to pay, these cybercriminals use denial-of-service (DoS) attacks and threaten to sell or release sensitive data to the public.

Not only is there a rise in these types of attacks, but the FBI reports there are 100 ransomware variants making their way around the world.

In the first method, cybercriminals might use stolen documents to set up new accounts. They then get the money and run, leaving the victim to face the consequences.

Alternatively, after they have set up a new account, cybercriminals sometimes behave for a year or so, remaining undetected. Then, after increasing credit limits or obtaining new credit cards because of their “stellar” payment history, they will max out the accounts and disappear.

Account takeovers are a major issue
Account takeover fraud is a type of identity theft in which hackers take control of a legitimate individual’s digital identity for financial gain.

According to a 2021 study, 43% of U.S. merchants claimed account takeover fraud accounted for over 10% of chargebacks, and separate research has reported that 22% of U.S. adults have been victims of account takeovers.

Deepfakes are getting more advanced
A single photograph and the right software allow a cybercriminal to create a fake but realistic image or video when overlaying that photograph with another image or video. This kind of impersonation is an up-and-coming form of fraud that is finding its way onto social media platforms. So, beware of fake photos and videos, especially on social media.

The potential to politically manipulate populations with the use of deepfakes on TV or on the internet could also lead to an increase in political instability across the globe.

Record-breaking cryptocurrency theft
In March 2022, Ronin Network was hacked and robbed of cryptocurrency worth $540 million at the time. The hackers got away with approximately 173,600 ethers (units of the widely used ethereum cryptocurrency) and over 25 million USDC (a cryptocurrency that is pegged to the U.S. dollar).

Increased effort to solve the year 2038 problem
Similar to the Y2K problem, the 2038 problem is a bug that will affect the way computers store time stamps. Computer logic defines time stamps with the current date and time, minus the number of seconds that have passed since Jan. 1, 1970.

In 2038, the number of elapsed seconds will exceed the information that can be stored in a four-byte data type, meaning most computers will need an extra byte to preserve their timing systems.

For many, the 2038 problem is solved. Others sense that a solution is near and there will be no threat by the time 2038 arrives. Without a resolution, however, hackers will likely search for ways to exploit this bug.

Who is most at risk for identity theft?

Most identity thefts are crimes of opportunity. Identity thieves often target those who don’t regularly check for identity theft warning signs and are unlikely to report irregular activity on their credit reports. This means that several groups are especially vulnerable to identity theft.

Everyone with a Social Security number is at risk for identity theft, but two demographics get targeted aggressively and often: the very young and the very old.

Members of the military

While deployed, active-duty members of the armed services are particularly vulnerable to identity theft because they may not notice mistakes on their credit reports or receive calls from debt collectors regarding a fraudulent charge. According to FTC reports, military consumers are most affected by government documents or benefits fraud and credit card fraud.

It’s relatively easy for cybercriminals to discover a person’s name, date of birth, phone number, hometown and other sensitive information through social media and networking sites. With this information, an identity thief can target victims for phishing and imposter scams.

People who have previously been affected by identity theft are at a greater risk for future identity theft and fraud. “Three out of every ten people tell us this happened to them before and now they’re dealing with it again,” said the ITRC's Velasquez.

Stealing a dead person’s identity is commonly referred to as “ghosting.” Ghosting often goes unnoticed by surviving family members for months or years.

Where is identity theft most common?

The FTC collects reports from consumers on a range of marketplace experiences and stores them in a secure online database. FTC statistics also include reports from other organizations, including federal, state, local and international law enforcement agencies. Out of over 5.7 million reports last year, slightly more than 25% were related to identity theft. 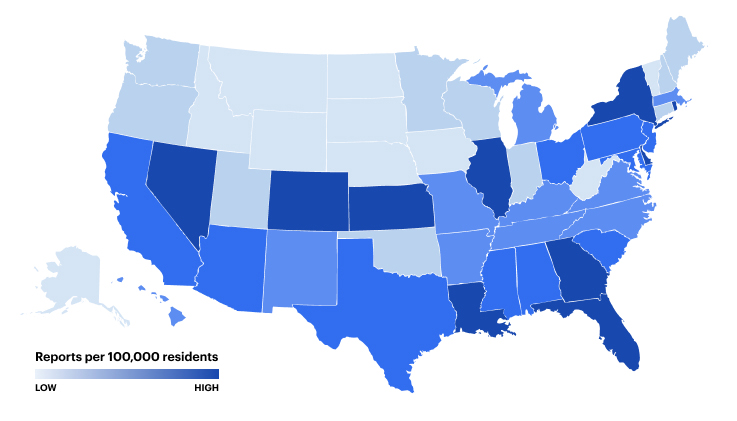 Anyone with a Social Security number can be the subject of identity theft, but according to the FTC’s 2021 Sentinel Data Book, published in February 2022, the most targeted victims are between the ages of 60 and 69. We can’t completely eliminate identity theft, but people who regularly monitor their accounts, bills and credit reports can lower their risk.

If you think you’re a victim of identity fraud, work with the FTC to restore your accounts and get on the road to recovery.

The better people understand identity theft, the more equipped they are to protect themselves. Our identity theft glossary below is regularly updated to include the most recent identity theft terms in the news. 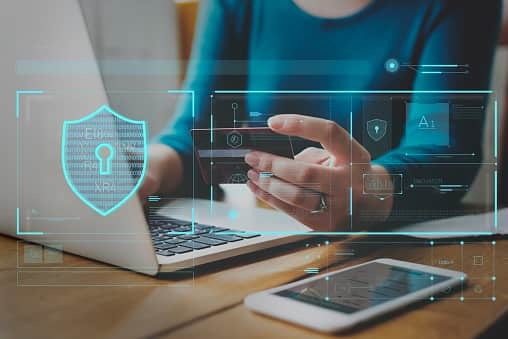