Johnny and John ** did a very good job installing our vanities and shower. They were very organized and clean. Love the shower and vanities makes our bathroom look beautiful. Thanks to the whole Independent Home's team.Would recommend to anyone. Ps the shower is really nice and easy to get in and out of.

Lawrence of Ft Worth, TX

The installers Johnny and John ** were very nice and clean. They really went out of their way to make sure we were happy. They did a very honest and reliable job. The whole Independent Home team was terrific. Would recommend to anyone.

Mr ** and his son were very professional. Very in depth on how to work the spa. They were very friendly and took care of my house while they were there. I am so excited to try out my new spa. I would recommend this company to any and everyone.

Jay and Matt were very courteous and answered all questions that we had. They worked very quickly but thoroughly. They are a very good team. We are happy with the tub and look forward to using it. Thank you Independent Home!

Installer was wonderful. Very polite and making sure we knew what was going on during the install. Explained things thoroughly. The tub will be a pleasure to learn to use. The tub seems to be very good quality and appearance. Everyone we dealt with seemed very concerned that we understood how the tub worked and how to take care of it.

The products are great and the installation was wonderful. The installers could not have done a better job. We are very satisfied and would recommend this walk in tub to anyone. I know that we will enjoy it many years. The sales person was well informed and professional. I highly recommend this product.

The installers Johnny and John ** did me a good job. The spa looks good. Cant wait to use it. My husband has trouble getting in our old tub and shower. So we got this tub so it would be easier on him. Thank you Independent Home for doing us a good job all the way from sales to the install.

The sales rep from Independent Home was very good and the walk-in tub was installed the middle of last month. It went very well although the installer had to come back the next day because he did a hot water tank too, so he had to go get one and install that. Then, he took the old bathtub and stuff out. He was fast. We like the walk-in tub well especially the air jets.

I’ve had the tub from Independent Home for about four weeks and it feels good. I liked it.

We've had a very good experience with our walk-in tub so far. My wife and I had been talking about getting a walk-in tub. I went online and checked out walk-in tubs. Shortly after I was online, I got a call from Independent Home, wanting to make an appointment to come by and talk to me. So the representative came by and talked to us about the product then we decided to go ahead and buy it. The installation also went just as I wanted it to.

I needed a walk-in tub because just stepping over the other bath tub was a little much for me. I went with Independent Home and so far, my experience using it has been wonderful. The installation was wonderful too. It was all done in a day and once it was installed, it was very nice. The installers were so professional, very nice and very courteous. Everything was cleaned up, so I appreciated them. So far, I'm enjoying the Independent Home walk-in tub.

I love our walk-in tub and I couldn't have asked for anybody to be any better or work any harder. They didn't just come in, throw it up and leave. They did a good job. The salespeople from Independent Home were wonderful. They were very sweet, kind and patient. They did excellent work. Then the installation was great as well. It took longer than I wanted it to because I wanted it instantly. But they caught everything. They put everything in well, cleaned up and left. Everything was better than it was when they came in and my favorite feature would be the countertop. The sink is made within the countertop and I don't ever have to worry again about it deteriorating.

My husband has wanted a walk-in bathtub for a long time. When we were in another state, he had a whirlpool, and he really loved it and has talked about it ever since. And so, we decided to go ahead with Independent Home. It was the lowest offer and we could handle the one that we got. We also like the rep that came. The installation process was very nice. The installers were efficient, fast, clean and neat. They were very good guys. They told us it would be done in a day, and it was not even half a day to get it in and working.

The only thing with the tub is you never know if you’re pushing the control on it hard enough. It doesn’t feel like a button to push. I don’t like that. I don’t know if we just aren’t used to it enough yet to get them to do what we are thinking they should do. But I was glad when I called back that they took the time and sent somebody out to let us see the things that we were not aware of. We didn’t understand the motor coming on after to drive the jets out. We were trying to shut it off and didn’t know what we were doing. So, that wasn’t explained. And the manual was not handy. It could have been brought to our attention when they were leaving to go over a few things in that manual so we know where to look for them.

John And Virginia of Fairfield, CT

The Sales Manager, Ari, offered a good deal on an Independent Home new walk-in tub. It had all the features we were seeking such as: inward opening door, water jets, air jets and heated seat. The price was amenable and included life-time warranty on the tub, and installation as well as removal of the existing cast iron tub and its acrylic overlay. The price was all inclusive including labor and taxes. The Installer, Tony, was meticulous and very professional. He worked over ten hours each of the several days he was at the house including a Saturday and Sunday. We are very pleased with the tub and the installation. 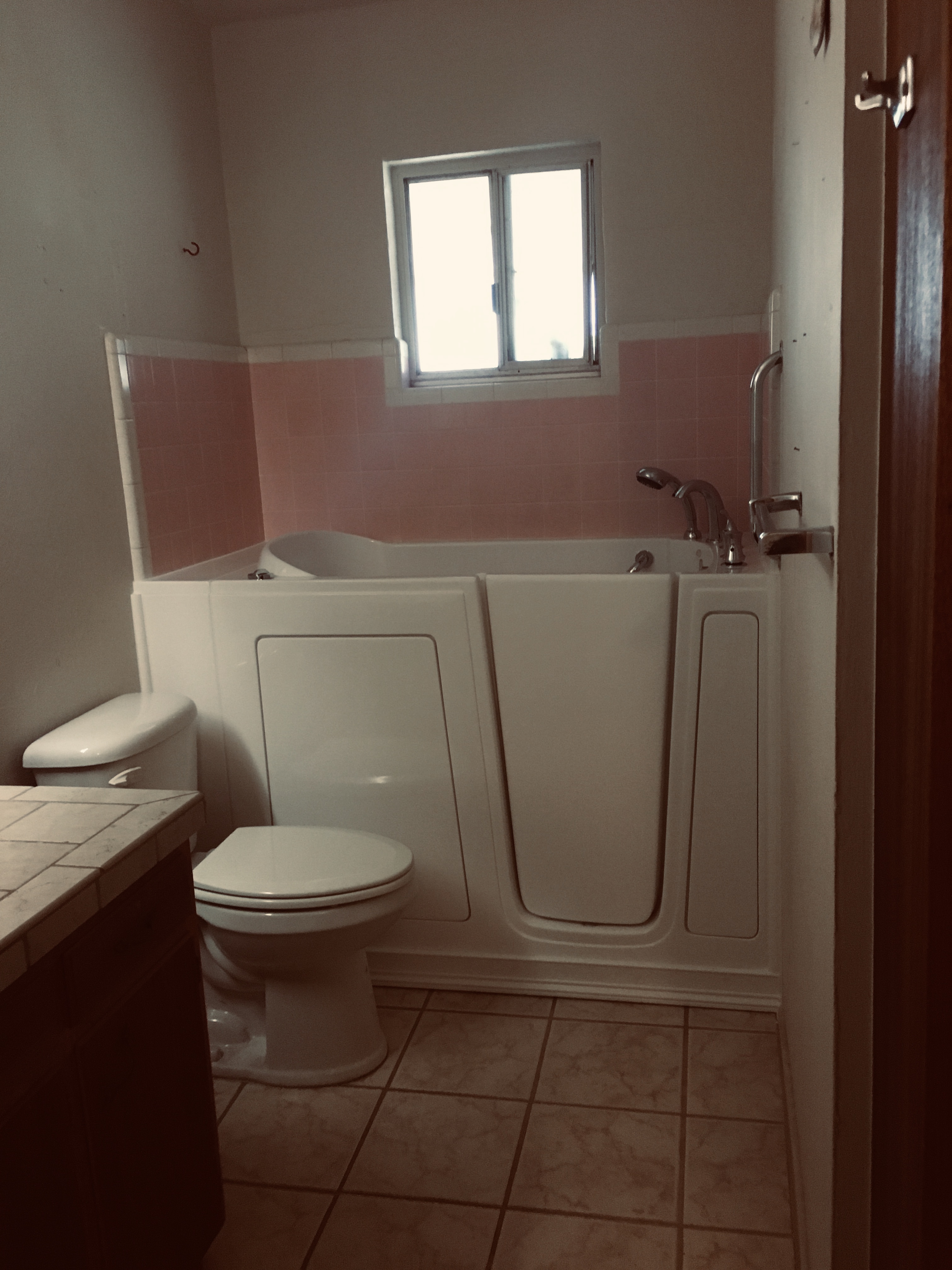 We had tub installed on Nov 8th, Ozzie and Joe came right on time. They were both very courteous and respectful. They did the job in a timely manner, and cleaned up after themselves. Everything was explained, on how to use the tub etc. The job was from 8am-3pm...They made sure to use care, when they were bringing in and installing the tub, to make sure not to damage anything. The salesman from Independent Home was very courteous also. We would recommend Independent Home and the great installers "Ozzie and Joe". They are very professional....

I want to thank the guys that came out to my home today and installed the walk in tub. They took out my shower and put in the walk in tub. Once they finished they took away all the trash. I was very satisfied. Thank again for a job well done.

I’m well-pleased with my Independent Home tub. I can get in it safely, and that’s what I wanted it for. The installation was done from 9:00 to 2:00, and the rep was real nice.

I really liked the salesman and their price. They were $1,000 cheaper. And I really, really like the tub. It works great. It's in a brand-new house, so I'm very pleased with it. I'm 73 years old and 6'4, and it's easier to get in and out of. The installers were very neat and they cleaned up after themselves.

The installers were very professional and very courteous. They were very clean and courteous. They did a fantastic job on the install. Thanks Independent Home for making everything easy from the sales to the installation. Would recommend to anyone. Thanks. PS Johnny and John Paul were very nice and knowledgeable and did our job in one day.

I’d seen Independent Home advertised and I called them. They came out and I liked what they had to say. The installers took about a week, and they were great when they came in. When they left, it was clean as a whistle.

The Independent Home representative got in and did his job, and got out in record time. Things are going great with my tub. I like the bubble bath and everything else in it.

The installation was good. As soon as the got there and was showed where it was going and where the plumbing was in the basement, the old tub shower was removed and the new tub went in. The new one is great. It is very relaxing.

My husband got a call from Independent Home and he made an appointment. Their reps came and told us all about their tub and we decided to take one. Their installers came in about a week and did a great job. They cleaned up really well and did the job in one day. Thus far, the tub we got works beautifully. My husband likes it. The water temperature and everything was great.

I needed a walk-in tub, and a fellow came out to the house and told me about Independent Home, and it beat the other competitor's prices. He was very knowledgeable. He was a really nice guy. The installers came out within two weeks, and it took them about five hours to put the tub in. Things are going very nice with the tub. I liked that it's very convenient and easy to use.

They arrived in a timely fashion and they were very professional. They did the installation in a neat and orderly fashion. They explain everything in detail to me and my wife. I would recommend them to anyone. Before leaving they cleaned up their work areas, leaving my house as they found it.

We liked Independent Home's tub and its features, which made us go with them. The fellow we worked with was very informative and comfortable to talk to. Moreover, everything went well with the installation. It was about a three-week process because they make each tub individually. The timeline was good for us though. The installers were really helpful and seemed to be good fellows. They had to come all the way from North Carolina down to West of Atlanta, which was tough on them, but they were courteous and cleaned up after themselves. The tub doesn’t add to the look of the bathroom, but we bought it for the safety features. We are getting older and we have a person who's concerned about the safety in the shower. It has been a good thing for us. You could sit in there, relax and have a nice, comfortable bath.

The installers were very professional and very courteous and clean. Johnny and Johnpaul did a very good job on the install. They were on time and finished in a timely manner. The whole Independent Home team made it easy from the sales dept to the installers. Very honest and professional people. Would recommend to anyone.