Consumers Fume as Their Toyotas Burn 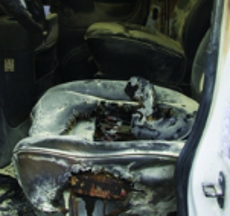 You wouldn't expect your car door to catch fire but that's apparently what's been happening on some 2007 through 2009 Toyotas, according to federal safety regulators.

The National Highway Traffic Safety Administration (NHTSA) said it has received 32 complaints of electrical fires or burned switches from fires that started in the driver's side door -- specifically in the power-window switch.

Some of the fires have been serious and have destroyed the entire car, although there is so far only one report of personal injury, which occurred when a passenger in a 2007 Camry tried to extinguish a door fire.

In that case, which occurred on Dec. 26, 2011, the consumer reported that she was driving normally with three passengers in her Camry when black smoke suddenly filled the car.

"The flames caught the left side of my arm and started to burn my coat," she reported to NHTSA. "After exiting, the flames quickly increased and began shooting into the air untrollably. My husband was able to retrieve a piece of clothing from the trunk of the car and used it to put out the fire while sustaining a burn on his hand."

The investigation centers on several models -- the 2007-2009 Camry, Camry Hybrid, RAV4, Yaris and the 2008 Highlander Hybrid. About 1.4 million vehicles have the switches that are implicated in the fires.

NHTSA said it is now doing an engineering analysis of the problem. That's a key step in deciding whether a recall will be issued.

Perhaps most striking about the 32 NHTSA complaints examined by ConsumerAffairs is the response many of the consumers received from Toyota's headquarters and its dealers: many reported getting no help at all and two said the dealers had laughed at their complaints.

In one case, a Toyota RAV4 caught fire while parked and unattended, NHTSA's case file indicated. The owner of the RAV4 said she had complained previously to Toyota of Braintree, Mass., about problems with the power windows. After her car burned to the ground, she said she was offered $13,000, which was not enough for her to replace her paid-off car without taking out a loan. She said she contacted Toyota headquarters, which refused to help her in any way.

One Camry owner said that after his door caught fire, he quickly extinguished it and took the car to Ventura Toyota, which charged him $437.36 in parts and $57.50 in labor to replace the switch assembly.

An Atlanta-area woman said that she and her children narrowly escaped injury when their car caught fire and filled with smoke, forcing them to run accross a busy intersection to safety. She said her Toyota dealer "actually made jokes about us being 'in a fire'" and ignored her request that they save the burned parts for examination by her insurance company. Although her car smelled of smoke for months after the incident, she said the Toyota dealer refused to detail the car or replace any of the smoke-damaged interior.

Another consumer reported that he was cleaning his car with the ignition on so that he could listen to the radio when the door began smoking. He extinguished the fire before it could spread but had to pay $422 to replace the master switch assembly. Toyota refused to offer any assistance, he said.

A Toyota Camry owner said that after his door caught fire, the Toyota dealer refused to offer any assistance because his car was out of warranty and claimed that "the fire was the first of that kind they have heard of."

Toyota became infamous for being slow to recognize and respond to consumers' reports of problems with unintended acceleration a few years ago. The problem was eventually traced to ill-fitting floor mats and sticky accelerator pedals, forcing Toyota to recall more than nine million vehicles worldwide. The recall hurt the company's sales and is blamed for reducing its share of the U.S. market.