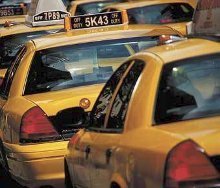 It's the end of an era: Ford has announced that it is permanently discontinuing its Crown Victoria and Lincoln Town Car models, effectively ending the long-declining reign of the big American highway cruiser.

The announcement was not a complete surprise, as high gas prices and the ongoing struggles facing the American car industry have forced both cars, which share Ford's panther platform, to take an increasingly low profile. In 2008, the Crown Victoria became available only through Ford Fleet, which sells cars in bulk to businesses and municipalities. The Town Car, which hasn't been redesigned in over a decade, has seen declining sales in recent years.

The news is having a surprisingly strong effect on the American psyche, especially in New York, where the cars remain a mainstay.

The New York Times, which calls the cars New York emblems and the automobiles that came to represent the city, is already beside itself. Crown Victorias make up around 90% of the city's taxi fleet, and their disappearance is tantamount to the demise of the storied Checker Cab, which ceased to exist in 1982. City limousine services, used to shuttle travelers from the airport and professionals home late at night, are dominated by the Town Car.

As David Yassky, chairman of the city's Taxi & Limousine Commission (TLC), told the Times, These cars are a facet of peoples everyday experience. Whatever takes their place will have a real and tangible influence on the citys aesthetic.

Creating the taxi of tomorrow

Just what will take their place, however, remains unclear. Police departments across the country have been expanding their once Crown Vic-dominated fleets to include newer sedans, especially the Chevrolet Impala and Dodge Charger.

Finding a new all-purpose taxi might prove a more difficult undertaking. Over ten models are currently approved for use in New York's taxi fleet, and bright yellow Volkswagen Jettas, Ford Escapes and even Toyota Sienna minivans are not an uncommon sight. In 2007, Mayor Michael Bloomberg, famous for banning trans fats and forbidding smoking basically anywhere, announced that by 2012, all city cabs would be hybrid vehicles.

The plan hit a snag in 2008, however, when a federal judge agreed with taxi owners' argument that environmental regulations were the responsibility of the federal, not city, government. The owners also argued that safety concerns and prohibitive maintenance costs made the plan untenable. Despite that setback, hybrid and clean-diesel cars now make up 15% of the city's fleet.

The TLC is urging New Yorkers to participate in creating the taxi of tomorrow, and has set up a website designed to gauge the various options available to bring a new model medallion yellow taxicab to New York City in the near future. Included in the Commission's wish list are a high level of safety, a smaller environmental and physical footprint, a superior passenger experience, and, of course, an iconic design that will identify the new taxi with New York City.

Despite their grief, taxi commissions and police departments will surely soldier on somehow. The industries faced a similar situation in 1996, when Chevrolet stopped producing its full-size Caprice, leaving the Crown Victoria and Town Car as the only remaining old-school American sedans. Ford's exit may in turn leave an opening for Chrysler -- the Dodge Charger is now the only full-size, real-wheel drive American sedan.