Drinker's Nose Not Just for Tipplers 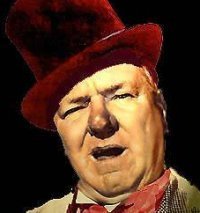 Q. My husband is getting a drinkers nose. He reminds me of W.C. Fields. But my husband doesnt really drink more than an occasional beer. I dont get it.

W.C. Fields, the vaudevillian and comedic actor in early films, was known to hoist more than an occasional beer. But, Fields got his red, bumpy nose from rosacea, not alcohol. Former President Bill Clinton has rosacea and so did the late financier J.P. Morgan.

Rosacea (roh-ZAY-shee-uh) is a chronic skin disease that causes redness and swelling. It usually affects the face. It can also strike the scalp, neck, ears, chest and back. You can also get it in your eyes; this condition is called ocular rosacea. The disease can make the eyes look bloodshot.

Rosacea affects about 14 million Americans, and most of them dont know they have it. According to a Gallup survey, almost 8 in 10 Americans do not know that rosacea exists.

There is no cure for rosacea and science hasnt found a cause. However, dermatologists can attack the symptoms with medication — both oral and topical — laser surgery and other treatments if the disease is caught early. It may take two months of treatment before skin affected by rosacea looks better.

Some believe that early treatment may reverse the disease. If ignored, rosacea often worsens and becomes difficult to treat. Rosacea may last for years. For most people it tends to get better and then flare up again.

Symptoms usually begin in adults between the ages of 30 and 60. When women with rosacea go through menopause, they may experience additional flushing.

Rosacea often starts with what looks like a blush. Then the disease progresses to red pimples and bumps filled with pus. Tiny blood vessels may become noticeable. The skin on the nose may become thick and red.

Research has debunked the old tale that rosacea is caused by heavy drinking. Alcohol aggravates rosacea but does not cause it. Another myth is that rosacea is adult acne. The disease has little to do with the pimples and blackheads of acne.

People with fair skin tend to get rosacea. Women are afflicted more often than men, but men get more severe forms of the disease. Rosacea often runs in families

If you have rosacea, here are some tips to avoid flare-ups:

• Shield yourself from the sun and extreme cold .

• Abstain from alcohol, if you can. If not, cut down.

• When you put anything on your face, do it gently. No scrubbing.

• Do not use facial products containing alcohol, acids and fragrances. Wash with mild soap.

• Avoid overheating. When exercising, make sure its in a cool place. And no hot showers or baths.

• Dont get hair spray on your face.

All Rights Reserved © 2008 by Fred Cicetti