The train from New Orleans to Lafayette (and Los Angeles) eased out past the Louisiana Superdome and its little green buddy, The Sports Arena, on time, on D-Day, 2008. The Atlantic/Gulf Hurricane Season began a few days earlier, on June 1.

After The Storms of 2005, we found rooms in Lafayette, "The Hub City" of Acadiana, but kept Squalor Heights, our Faubourg Marigny garret on the edge of the French Quarter.

To be back in The City FEMA Forgot for the opening of the 2008 hurricane season, we took Greyhound (Amtrickle runs only three days a week) across the bottom lands of Great Mother Swamp, Atchafalaya.

Friends in New Orleans were going to Florida, and we were house-sitting their two dogs and spectacular home in the French Quarter. Hurricane season arrived two days after we did. In celebration, the Upper Middle West held its second 100-year flood in two months. Louisiana did nothing to mark the matter — unless you count the Army Corps of Engineers stuffing New Orleans new levees with old newspapers.

Will the government's papier-mch levees save us? One day, soon after The Storms of '05, we saw a billboard on Interstate-10, near Metairie, that read: "Need help? Go to www.gov.shit".

Last month's multiple tornadoes up north had winds matching Hurricanes Rita and Katrina. They sent a wall of Yankee rainwater down the Mississippi River, spilling through the Bonnet Carré Spillway and into Lake Pontchartrain.

An Iowa Boy Scout Camp was hit hard by a twister. The brave young Scouts set up their own triage center utilizing Boy Scout training. Now we know, we should have called the Iowa Boy Scouts instead of FEMA. Then we might have heard: "Attaboy, Scouters, you're doin' a heck of a job!"

As we stepped off the Greyhound in New Orleans, we said to a young man in line behind us, "You been back since The Storm?"

"Naw," he said, "I been locked up." His tone was flat. As he spoke, he looked past us, at the chain link fence separating Greyhound's buses from Amtrak's trains. On the tracks where the young man looked were two private rail cars. This is where Amtrak parked evacuation trains, AFTER The Storm. And where Dan Akroyd's private car had been, in April, when we arrived for Jazz Fest.

"Before The Storm," we said, to no one listening, "Dan Akroyd parked his railroad car down on The River, in Faubourg Marigny, where Elysian Fields, Esplanade and Decatur Streets meet. Don't know where he keeps it now. But, this Spring, Akroyd, the jazz lover, parked it right there."

A spectacular fresco wraps around the inside four walls of the huge waiting room. It proclaims Louisiana history in a masterpiece of cubist art, by the late Conrad Albrizio. This epic mural is a national treasure that was plagued by lime blooms following Katrina. (The station stayed more-or-less dry and was commandeered as Orleans Parish Prison, after O. P. P. flooded.) 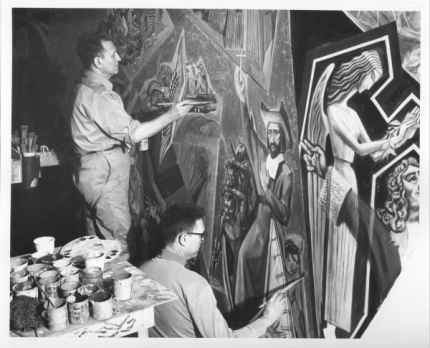 Every lover of Louisiana, of history, of art owes a thank-you to Michael Sartisky and the Louisiana Endowment for the Humanities for saving this great work of art.

At the D-Day Museum, on Higgins Drive, we saw our first Sherman Tank, ever. We couldn't wait for the parade that promised to feature the tank — because we had to catch the Sunset Limited West. We arrived at the Museum on Featherbike, our yellow feathered pre-K bicycle that is something of its own parade — and Hurricane survivor. 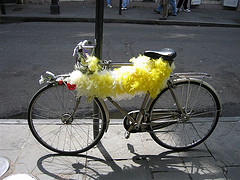 We were nearly turned away by an aging warrior in dress uniform and walker. He guarded the glass doors, and looked at us with jaundiced eye. A smiling blonde woman saved us. She explained the Sherman Tank was in a warehouse across the street where we were welcome to have a look.

The famous war machine was tended over by a young man in what we took to be the gear needed to drive it. He, too, was smiling and his entourage looked young and full of life. In the ebullience of the moment, we all smiled at each other, patted the tank, and lost all thoughts of what such a machine was built to do.

Later we breakfasted at Mother's, on rue Poydras, where the food (like World War II) was better in memory. Then we visited "White Space Exhibition," Greg Miles' great photographs of current New Orleans musicians, at the ultra chic W Hotel.

At Harrah's Hotel, across Poydras, we checked out the new digs of Ruth's Chris Steak House. (The flooded Broad Street location is nevermore.) Nice, but too soon to tell. The hotel's first try, Riche's, failed. Ruth's, with its many names and long history should better understand the New Orleans palate and pocket book — and that of its visitors. In the hotel rooms and the lobby were stunning over-sized photographs of the French Quarter, by Richard Sexton. We never cease to marvel at images of ourselves and our Great Swamp City.

Boarding the train, a small man — the Train Assistant — with a neatly-trimmed white beard, handed out colored slips of paper on which he penciled in a number. Ours was "26." The process was slow and the line quickly backed up along the loading platform.

"Why don't we just get on board and find our own seat, like we always do?" asked an elderly woman in a black dress trimmed in neat white lace.

"I guess I made a mistake, telling friends my senior ticket to New Orleans was only $17."

She had once taught school in Lafayette and had been to New Orleans for a luncheon party with other retired teachers.

"Guess too many of them heard me. A rare treat for a teacher," she said with a small laugh.

At seat number 26 sat a man and wife bound for Houston. I took seat number 16, across and up the aisle. It was soon surrounded by young mothers and young children. The white beard followed them on board and asked if we would not rather be away from the cheering children. We would.

On our way to the back of the car we passed the school teacher, settled into a quiet seat in the rear. She said she had heard all the children she ever wanted to hear.

"The City That Care Forgot," that number one thing New Orleans has always sold to its tourists, is now a harder sell. And upstart Los Vegas has stolen the title "Sin City."

Still, we had a lunch in Faubourg Treme, at Dooky Chase, that would have dazzled the gods. The great Leah Chase, cook, greeted us and introduced us to her daughter, the great Leah Chase, the-singer-back-from-Paris. And at Brennan's, on Royal Street, we sat at table with Alana Brennan and Bridget Brennan Tyrrell. It gets no better than great food and lovely women.

The Sunset Limited slid down the West slope of the sturdy old Huey P. Long Bridge.

We stood at the rear door of the last car and watched the orange-hulled S. S. Phoenix Tucson sail downstream, under our feet.

Nor any better than that!

---
Leonard Earl Johnson is a former cook, merchant seaman, photographer and columnist for Les Amis de Marigny, a New Orleans monthly magazine. Post-Katrina, he has decamped to Lafayette, La. Columns past, present and future are at www.lej.org.