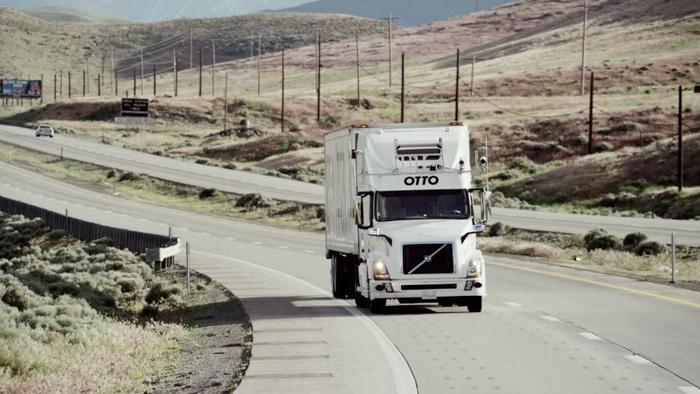 Uber’s vision for self-driving trucks and truck drivers working together to move freight around the country has become a reality. As of yesterday, those self-driving trucks are on the road and making runs in Arizona. Uber’s been quietly testing the program’s viability in the Grand Canyon state since last November, and it feels it’s ready for prime time.

When Uber bought Otto, a self-driving trucking company, less than two years ago, it wanted the world to know that the move was a “big deal.”

“In order to provide digital services in the physical world, we must build sophisticated logistics, artificial intelligence and robotics systems that serve and elevate humanity,” said Travis Kalanick, Uber’s then-CEO and co-founder.

“Together, we now have one of the strongest autonomous engineering groups in the world; self-driving trucks and cars that are already on the road thanks to Otto and Uber’s Advanced Technologies Center in Pittsburgh; the practical experience that comes from running ridesharing and delivery services in hundreds of cities; with the data and intelligence that comes from doing 1.2 billion miles on the road every month.”

An example of self-driving trucking works

The new self-driving technologies used in Uber’s fleet still currently require drivers to make deliveries and sync up with others on the road. Let’s take an Uber trucker named Jenny as an example.

However, the system is not literally “hands-off.” While the automated system takes control of the vehicle’s accelerating, braking, and steering, there’s still a driver behind the wheel monitoring the driving and ready to take over the controls if something goes wrong.

Is this the end of the road for truckers?

Just like Uber and Lyft signaled a change for taxis, Google, Uber, Tesla, and the major truck manufacturers are gazing toward a future where the 2 million truckers of today will be demoted, at the very least, to co-pilots.

“They know their game is over,” observed one trucker watching Uber’s video overview of its new service. “I drove semi for like 9 months and then realized these geeks from MIT and Harvard are going to change this industry. Future truckers will only do city work until these geeks figure out how to navigate big semi in the city or companies move their yards outside the city limits.﻿”

Despite getting the self-driving truck idea to market first, Uber no doubt sees other competitors over its shoulders. It’s a technological footrace with all the markings of being contentious. Just last month, Uber handed Google $245 million in Uber stock to settle the latter’s claims that Uber had tried to steal trade secrets relating to Waymo, Google’s autonomous car development company.

And, there’s a lot to be had, too. Trucking is a $700 billion industry, with more than $200 billion of that going to drivers. Grabbing a piece of that driver compensation is a big haul for any company.