Trump's use of Twitter cited in sex offender case 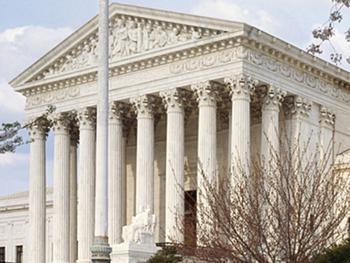 Donald Trump is not known as a civil libertarian, but his nonstop use of Twitter was invoked by Supreme Court Justice Elena Kagan as the court heard oral arguments about a North Carolina law that limits use of social media by registered sex offenders.

“In fact, everybody uses Twitter,” Kagan said. “All 50 governors, all 100 senators, every member of the House has a Twitter account. So this has become a crucially important channel of political communication.”

The case involved Lester Gerard Packingham. He was arrested for dating a 13-year-old girl when he was 21, Courthouse News Service reported. That made him subject to a 2008 state law that prohibits sex offenders from using commercial social networks.

Things were going along just fine until Packingham went to court and beat a traffic ticket, then took to Facebook to celebrate his win.

“Man God is Good!” the post said. “How about I got so much favor they dismissed the ticket before court even started? No fine, no court costs, no nothing spent … Praise be to GOD, WOW! Thank JESUS!”

A police officer trolling the web for sex offenders found the post and Packingham was once again in trouble. Packingham's lawyer, David Goldberg of the American Civil Liberties Union, argued that the state law is "sweeping" and too broad. He called it a "stark abridgement of the freedom of speech."

"[The law] reaches vast swaths of core First Amendment activity that is totally unrelated to the government's preventative purpose. Mr. Packingham is not accused of communicating with or viewing the profile of a minor," Goldberg said. "He violated [the law] by speaking to his friends and family about his experience in traffic court."

Arguing for the state was Deputy Attorney General Robert Montgomery, who cast the law as similar to laws that prohibit sex offenders from visiting schools, playgrounds, and similar locations. He was questioned by justices about whether the law was so broad it took away inalienable rights not related to sexual contact with minors.

"So a person in this situation, for example, cannot go onto the President's Twitter account to find out what the President is saying today?" Justice Kagan asked Montgomery, according to a Supreme Court transcript. "Not only the President. I mean, we're sort of aware of it because the President now uses Twitter. But in fact, everybody uses Twitter. ... So this has become a crucial -- crucially important channel of political communication. And a person couldn't go onto those sites and find out what these members of our government are thinking or saying or doing; is that right?"

"That's right," Montgomery conceded. "However, there are alternatives. Usually those congressmen also have their own web page."

A ruling on the case is expected later this year.