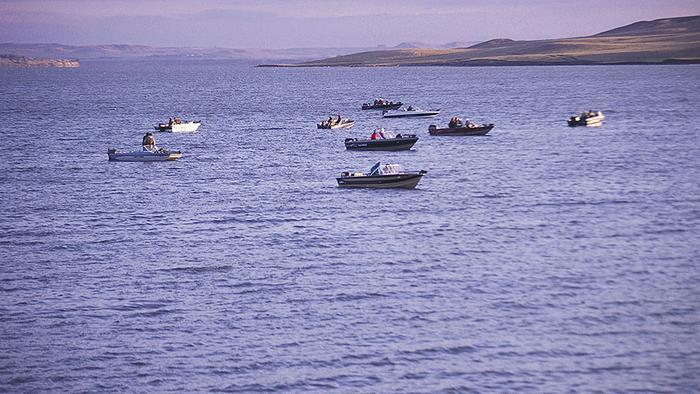 Two days before President Trump took office, the environmentalists and Native Americans fighting the Dakota Access Pipeline celebrated another small but hopeful legal victory -- the United States Army Corps of Engineers announced on January 18 that it was beginning a new environmental study into the pipeline's Lake Oahe crossing, as well as allowing people to leave public comments about the project until February 20.

The Corps back in December had already made a surprise announcement that it would consider alternative routes for the Dakota Access Pipeline, routes which would be explored via a formal Environmental Impact Statement. But then the Dakota Access Pipeline filed a motion seeking a temporary restraining order to stop the Corps from conducting that impact statement. The Corps then stalled on formally registering its impact statement, the necessary next step to begin.

Finally, on January 18, the Corps formally registered its Environmental Impact Statement, by posting a  "Notice of an Intent to Register" on its website. The notice, the Standing Rock Sioux said in a statement shortly afterward, is "yet another small victory on the path to justice."

But with Trump signing what the Washington Post reported were "executive orders Tuesday to revive the controversial Dakota Access and Keystone XL oil pipelines," what happens next is unclear.  The Corps of Engineers' spokespeople have not returned multiple messages left Tuesday inquiring about the pipeline or the pending Environmental Impact Statement. And the Interior Department, which also oversees the pipeline, directed press inquiries back to the Corps.

Jan Hasselman, an attorney with EarthJustice representing the Standing Rock Sioux on the legal front as they fight the pipeline in court, contends that Trump's latest order isn't much of an order at all, despite the news reports describing it as such.

"The president’s action is not an executive order, as has been reported, but a 'memorandum' to the U.S. Army Corps of Engineers directing them to complete the permitting process to the extent allowed under law,'" Hasselman writes. In fact, the document Trump signed is simply called, "MEMORANDUM FOR THE SECRETARY OF THE ARMY."

In the memorandum, Trump directs the Corps to "review and approve in an expedited manner, to the extent permitted by law and as warranted, and with such conditions as are necessary or appropriate, requests for approvals to construct and operate the DAPL..." (the full document is embedded below).

Hasselman, the EarthJustice attorney, notes that the memo  is simply asking the Corps to complete its permitting process to the extent it can legally. "We believe that the Corps has already found that the law — including the Tribe’s treaty rights — requires a full Environmental Impact Statement (EIS) and consideration of route alternatives," he adds. "Nothing in the Presidential Memorandum changes that or even addresses it."

He further suggests that more lawsuits will come if the Corps does not go through with its Environmental Impact Statement as promised: "If the Corps responds to this directive by issuing the easement without the EIS process, it will be violating the law and subjecting itself to additional litigation."

Loose state laws as well as federal regulations that Barack Obama enacted during his presidency already allow for the expedited approval of oil and gas pipelines, as we've previously reported. In 2016, when approving portions of the Dakota Access Pipeline that it has authority over, the Corps of Engineers determined that the pipeline could cross 200 different waterways under Nationwide Permit #12, the agency's permitting system that allows for expedited approval of pipelines.

But the pipeline's crossing under Lake Oahe, a source of drinking water for the Sioux that connects to the Missouri River, remained in dispute as protesters organized and began attracting worldwide support. "The easement necessary for the pipeline to cross USACE-managed federal land at Lake Oahe is currently under review," agency spokesperson Moira Kelley wrote in a November 29 email. Five days later,  as religious clergy from various faiths and thousands of military veterans joined the Sioux at their resistance camp for a crowded and cold weekend,  the Corps suddenly announced that it would be considering alternative routes.

As the Corps wrote on its website, "a consideration of alternative routes for the Dakota Access Pipeline Crossing would be best accomplished through an Environmental Impact Statement with full public input and analysis."

With the Corps officially beginning its EIS during the final days of the Obama administration on January 18, is there a chance that it could still deny the pipeline's easement under Lake Oahe? Daveon Coleman, an EarthJustice spokesman, says to ConsumerAffairs in an email: "The short answer is yes, in theory, the Corps still has authority to deny the easement."

Construction of the Dakota Access Pipeline by Amy Cranks on Scribd