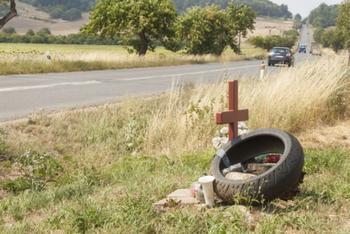 The National Safety Council estimates nearly 40,000 people died in traffic accidents last year, 6% more than the previous year and 14% more than in 2014.

It was the largest two-year increase in traffic deaths since 1964.

Logically, traffic deaths should be going lower. Think about all the safety features modern vehicles now have. In 1964, not only were there no airbags but seat belts weren't even required in all cars.

So why are traffic deaths soaring? Part of the answer my lie in the fact that there are a lot more vehicles on the road than there were in 1964.

Then again, the behavior of the people behind the wheel might also play a role. The Council conducted a survey of drivers and learned that 64% thought exceeding the speed limit was not a safety issue.

Forty-seven percent thought it was acceptable for a driver to text while behind the wheel, 13% believe it is okay to drive after smoking marijuana and even 10% aren't deterred from driving after drinking a little too much alcohol.

"Our complacency is killing us," said Deborah Hersman, president and CEO of the National Safety Council. "Americans believe there is nothing we can do to stop crashes from happening, but that isn't true."

Hersman says the U.S. is behind the rest of the developed world in preventing highway fatalities. As we reported last July, the U.S. has the highest traffic death rate among the top 20 high-income nations. And while death rates were down in the U.S. by 31% from 2000 to 2013, other developed countries dramatically reduced their crash deaths by an average of 56% during the same period.

What's the answer? Some might think it's autonomous cars, but the National Safety Council wants immediate implementation of life-saving measures on the road that it says would set a goal of zero deaths.

Those measures include mandatory ignition locks for people with a drunk driving conviction, along with better education about the dangers of drinking and driving. It also believes automated enforcement tools to catch speeders, similar to the traffic cameras that nab drivers who run red lights, is a step in the right direction.

The Council is also pushing laws to ban the use of cell phones -- even in hands-free mode -- when someone is behind the wheel. Finally, it's pushing for states to toughen seat belt laws and extend three-tiered licensing systems to all new drivers from the current age of 18 to 21.