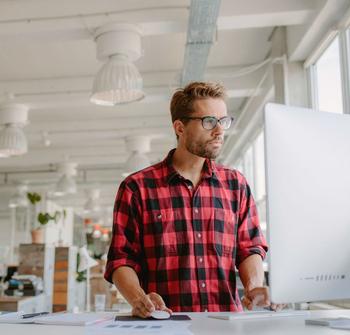 A series of studies over the last decade have concluded that too much sitting is as bad as smoking cigarettes, urging office workers to get up on their feet.

Now an Australian study suggests we should all take a seat.

Writing in the medical journal Ergonomics, researchers at Curtin University say they found that office workers who spend prolonged periods standing tend to suffer from leg pain and a slower mental ability.

"Standing is being used to replace sitting by office workers; however, there are health risks associated with prolonged standing," the authors write. "In a laboratory study involving two hour prolonged standing, discomfort increased (all body areas), reaction time and mental state deteriorated while creative problem-solving improved. Prolonged standing should be undertaken with caution."

Growing use of standing desks

The researchers say their findings are relevant because of the growing use of adjustable desks in the workplace, which allow sedentary office workers to get out of their chairs and stand while they work. A number of different companies now market these desks as a way to improve health and productivity.

Previous studies, like one from Kaiser Permanente in 2014, suggested that prolonged sitting significantly increases heart attack risks in men. The Australian research runs counter to a 2016 study at Texas A&M that suggested working while standing actually improved mental performance.

Despite these studies, the Australian researchers contend there is little evidence to support the use of standing desks.

In an admittedly small study, the researchers say they found people who used the standing desks for prolonged periods of time began having pain in their lower back and legs. They say the pain is likely due to swollen veins, posing potential danger to the heart.

Despite the findings, health experts still appear to view too much sitting as more harmful than excessive standing. Dr. James A. Levine of the Mayo Clinic writes that too much sitting is known to be associated with obesity and metabolic syndrome, conditions that can lead to other serious health problems.

Levine suggests office workers stand when they get the chance. Better still, he says taking short walks to interrupt sedentary activity will burn calories and break down fats and sugars within the body.