Smart collar can offer you a glimpse into your dog's head 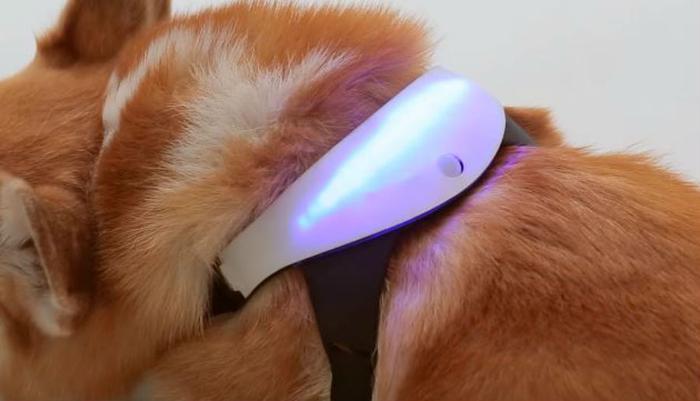 How is your dog feeling? A quick glance at his tail might offer some clues, but there’s often a lot more going on below the surface.

Joji Yamaguchi, the biologist behind the creation of a new smart collar called ‘Inupathy,’ believes a dog’s heart rate is the biggest indicator of his current emotional state.

In an effort to better understand his dog and help other pet owners do the same, Yamaguchi designed a collar which shows -- via different colored lights -- how a dog is feeling at an emotional level.

“I was always worried about my dog’s nervousness and wanted a way to learn how to make him relaxed,” Yamaguchi told Newsweek. “So I invented a device capable of analyzing the rhythm of a heart beat."

Colored LED lights embedded on the collar function as a way of letting pet parents see how their dog is reacting to the world at any given moment.

If your dog is in a relaxed state, a blue light will appear on the device. If he’s focusing intently on a squirrel in the distance or attempting to master a new trick, the light will glow white to indicate that the dog is concentrating.

Knowing if a dog is happy, calm, excited, or concentrating can help pet owners understand their dogs’ needs, says Yamaguchi. This deeper understanding, he believes, can strengthen the bond between pet parents and their dogs.

Instead of relying on the position of a dog’s tail or other external indicators of emotion, the Inupathy collar lets pet owners see their dog’s internal emotional state.

What might the collar reveal? In Yamaguchi’s case, the device opened his eyes to the fact that his Corgi preferred to be within close proximity of him.

“I’ve learnt that the distance between me and my dog, and whether I’m touching him or not is very important,” Yamaguchi said. “He is also more relaxed with the door of a room closed, rather than opened.”

He also found that aggression wasn’t always the reason his dog barked at other dogs. He gleaned this insight by comparing his dog’s reaction to cats versus dogs. While barking at cats, the collar lit up red, Yamaguchi told The Next Web. But while barking at dogs, the collar picked up on the fact that the bark was less aggressive.