In addition to the health benefits, students also perform better in the classroom 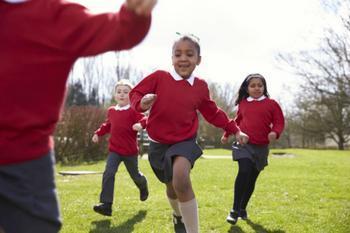 Most school-aged children would readily admit that their favorite part of the school day isn’t math, science, or English. Recess has always been a favorite for kids because it gives them a break from academics and allows them to expend pent-up energy in some playtime.

However, research has shown that not all kids take advantage of this time to run around and be active, which may adversely affect their health in the long run. Luckily, a new study from the University of Missouri shows that zones that include specific games encourage even the most hesitant students to participate in healthy exercise.

“Playground zoning is one way schools can be proactive in their students’ health and wellness. Recess is the best way for young children to be active, and through playground zoning, schools can ensure that children are achieving maximum benefits during their recess period,” said associate professor Stephen Ball.

“Zoning” a playground involves more than just creating separate spaces for different games, although that is one major part of it. Additionally, the researchers say that the technique is also meant to encourage vigorous playtime that goes beyond what kids are used to.

For example, the researchers say that a zone designated for kickball can be improved by reworking it into “hustle kickball,” where kids play the game in a rapid fire manner instead of waiting in line to kick. Other sports and activities can be reworked in a similar manner to keep kids moving and reduce sedentary time.

The study analyzed how effective zoning was for keeping kids active. Young participants were fitted with accelerometers and had their playtime tracked. The researchers found that kids who participated in a zoned recess period were much more physically active than kids who underwent a normal recess period.

In addition to the health benefits, the researchers say that zoning a playground could also lead to academic benefits as well.

“Past research has proven that activity helps academic performance. By reworking traditional recess games to be more vigorous, children are able to increase their physical activity in a really easy way, improving their health and doing better in school,” said Jill Barnas, a doctoral student at the University of Missouri.

The full study has been published in The Physical Educator.