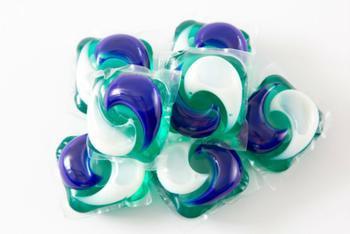 Fans of convenience may enjoy the simplicity of laundry detergent pods, but parents of young children should be aware of the potential dangers associated with having liquid laundry packets in the house.

Reports of children mistaking colorful laundry pods for toys or candy have already sparked concern among parents and caregivers. Now, a new study finds that there's been a dramatic increase in the number of young children who have suffered eye burns from the chemicals inside the packets.

The number of eye injuries caused by laundry detergent pods increased 32-fold between 2012 and 2015 among preschool-aged children, a new report published in JAMA Ophthalmology found.

In 2012, there were only 12 reported incidences of pod-related eye burns. But by 2015, almost 500 eye injuries had been reported. Researchers noted that the proportion of chemical burns to the eye from laundry pods rose from less than 1% in 2012 to 26% in 2015.

"These data suggest that the role of laundry detergent pods in eye injuries among preschool-aged children is growing,” the authors wrote.

Chemical eye burns often happened when the liquid inside the packet squirted into kids’ eyes or when the pod contents leaked onto their hands and a burn resulted from hand-eye contact. The study found that almost 85% of the injuries happened at home.

Lead researcher Dr. R. Sterling Haring from the Johns Hopkins University Bloomberg School of Public Health expects the number of eye burns in 2016 to be higher than they were in 2015. To keep kids safe, the authors say changes to the appearance and durability of laundry pods may be needed.

“In addition to proper storage and use of these devices, prevention strategies might include redesigning packaging to reduce the attractiveness of these products to young children and improving their strength and durability,” the authors said.

In addressing the study's results, the American Cleaning Institute (ACI) released a statement noting that proper storage and handling of laundry pods is crucial to keeping kids safe. Additionally, the group noted that manufacturers are working toward new packaging and labeling measures to improve safety.

In its statement, the ACI said that a voluntary safety standard that ensures the packets “withstand the squeezing pressure of a child” was introduced in December 2015. By the end of 2016, most products shipped to retailers were in compliance with the new guidelines.

“Manufacturers of liquid laundry detergent packets are very committed to reducing the number of incidents with these products, which are used safely by millions of consumers every day,” the ACI wrote.

Per the new standards, liquid laundry pods must be stronger and include "a menu of secure package closures." A bitter-tasting film covering would help to deter kids from biting into the pods.