Is college worth it? Ask people paying off student loans

A survey finds 45% of borrowers are unhappy with the result 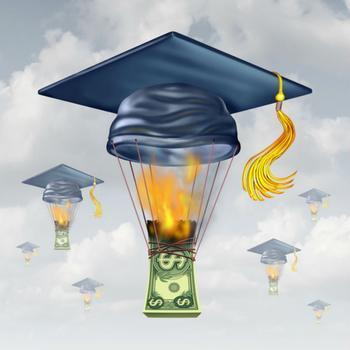 Since skyrocketing student loan debt became a major cause for concern, there has been some debate on the value of an expensive college education. Higher education, quite understandably, insists it pays off in the long run.

But what do the people who took out the loans and are saddled with the debt think? Reveal from the Center for Investigative Reporting, partnering with Consumer Reports, did ask, and has compiled a report based on interviews with a representative sample of people with student loan debt.

Despite the contention, and plenty of data backing it up, that a college education results in a lifetime of higher earnings, a surprising number of the students in the survey aren't buying it.

Of those out of college but still paying off student loans, 45% said their college education was not worth the cost. Drilling deeper into that group, the survey found 38% of them did not graduate.

In addition, 69% said they have had trouble making loan payments. Seventy-eight percent earn less than $50,000 a year. And perhaps most telling, 43% did not get help or advice from parents when they made financial aid decisions.

The Consumer Reports survey found that once students leave college, their loan debt makes itself felt in a variety of ways. The survey found 44% had to adjust their day-to-day living expenses while 37% said they put off starting a retirement savings plan or other financial goals.

It's also affected the real estate market, with 28% saying it had caused them to delay buying a house and 12% said they postponed marriage. Fourteen percent said they even changed careers because of their student loan debt.

The report concludes with some advice for students and parents on how to avoid student loan traps. It starts with having a candid family talk about goals and objectives. Having a plan is key, since only 39% of college students graduate in four years. Changing majors is costly, since it usually results in another year or two of expensive education.

Also, the report advises students and parents to nail down the actual cost of college. This can be tricky, but we reported a couple of years ago about a free app called College Abacus. It's a net cost calculator that can help students arrive at the net cost of college for each particular school being considered.

Finally, look at all options for reducing costs. Completing the first two years of college at a community college will save money. So will studying abroad. And working for a company that will pay your tuition while you work could result in graduating with no student debt at all.