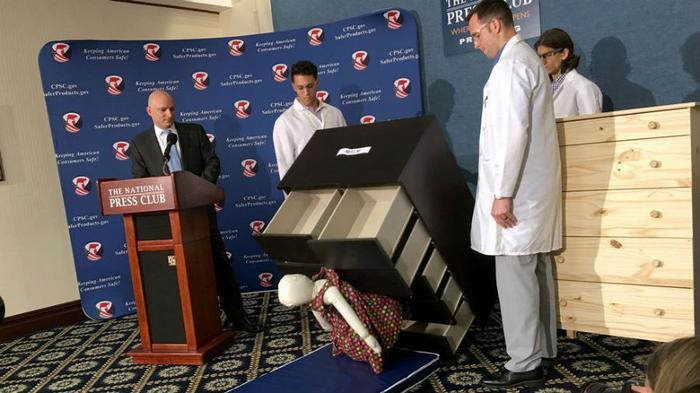 For years, Ikea has faced the ire of consumers and regulators over its supposed lack of concern for the safety of consumers. Consumer advocacy groups say that the company has sold millions of dressers that pose a serious tip-over hazard, leading to the deaths of at least half a dozen children and toddlers.

Back in June, the company recalled 29 million dangerous chest and dresser models that didn’t comply with U.S. voluntary industry standards, but further action will be taken to compensate some of the affected consumers. The Washington Post reports that Ikea will pay a $50 million settlement that will be split evenly between three families.

But the agreement does little to end the risk unstable furniture poses to children, said Sen. Amy Klobuchar (D-Minn.), who has introduced legislation that would require tougher safety standards.

“IKEA has taken some responsibility for these deaths both through the settlement and the biggest furniture recall in the history of America. The danger furniture tip-overs pose goes beyond IKEA’s Malm dressers. Until we have effective standards in place, kids will continue to be at risk of injuries and death,” Klobuchar said. “We need to pass my bill to prevent any further tragedies, ensure stronger standards across the board, and protect our children.”

In several of its other wrongful death lawsuits, Ikea contends that families are to blame for deaths due to not anchoring the dressers to the wall like the instructions suggest. However, consumer groups charge that the company is at fault for knowingly selling dressers that are a hazard and resisting efforts to amend the situation quickly.

“Ikea sold millions of unstable dressers with a tip-over hazard that led to the deaths of at least six toddlers and continues to place countless children at risk. It resisted a recall for too long,” said three advocacy groups in a joint statement earlier this year.

Last month, federal safety officials with the Consumer Product Safety Commission announced that consumers should "immediately stop using any recalled chest and dresser that is not properly anchored to the wall and place it into an area that children cannot access,” adding that Ikea could be contacted for either a refund of the product or a free wall-anchoring kit.

In addition to the $50 million settlement, Ikea has pledged to donate additional funds to various organizations in memory of each child. Three children’s hospitals in Philadelphia, Washington, and Minnesota will split a $150,000 donation from the company, and the nonprofit group Shane’s Foundation will receive another $100,000. Ikea has also vowed to increase consumer knowledge of tip-over hazards by funding television and internet advertisements.