The unraveling of the Obama administration continues in Congress 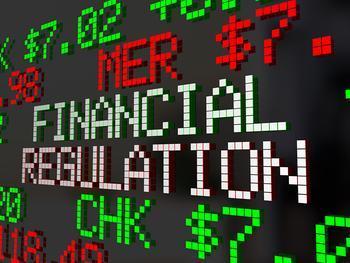 On the same day the full House voted to repeal the Affordable Care Act, a key House committee voted to roll back critical parts of the law regulating big banks. Both legislative targets are hallmarks of the Obama Administration.

The House Financial Services Committee approved the Choice Act, which repeals certain sections of the Dodd Frank Act, which was passed after the financial crisis early in the Obama administration.

It repeals Title II of Dodd Frank, which covers how to handle failed banks. It would replace it with a newly revised part of the bankruptcy code to deal with financial institutions that go under.

But perhaps more important to consumers, the Choice Act would kill off the Fiduciary Rule once and for all. The first attempt to prevent the rule from going into effect failed last week when Democrats insisted that language killing it be removed from a spending measure.

Without the leverage of a threatened government shutdown however, Democrats might not be able to block the rule's demise. Republicans probably have the votes, in the House at least, to pass the Choice Act.

The Fiduciary Rule requires financial advisors to put the client's interests ahead of their own, which doesn't seem all that controversial. The Obama administration Labor Department drafted the rule because it was concerned that financial advisors' clients, many of whom are saving for retirement, aren't getting objective advice if the advisor is also getting commissions and fees when the client invests in certain funds.

The financial services industry uniformly opposes the rule, saying in effect that taking away a wealth advisor's fees and commissions would prompt many to choose not to offer advice at all. Middle class investors, they argue, would lose access to any investment advice.

CFPB in the crosshairs

The Choice Act also takes aim at the Consumer Financial Protection Bureau (CFPB), established under Dodd Frank with the sole mission of protecting consumers' interests. Republicans have attacked it as "unaccountable," another way of saying it doesn't balance consumers' interests against businesses' interests.

Under the Choice Act, the CFPB would not longer have the authority to unilaterally act against deceptive and unfair practices. It would also have to answer to Congress for its funding. CFPB supporters say that would subject it to political pressure.