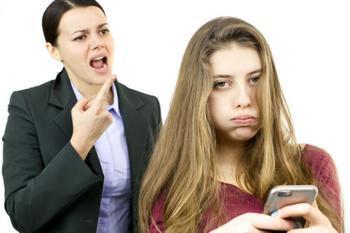 Frequently yelling, hitting, or threatening your child with physical consequences could have a negative impact on their behavior at school, a new study has found.

From an analysis of more than 1,000 students, researchers found that kids raised by harsh parents were more likely to find their peer group more important than other responsibilities.

This mindset led them to engage in negative behaviors, including delinquency and early sexual behavior, during adolescence. As a result, children brought up by harsh parents often had lower educational achievement by the age of 21.

"In our study, harsh parenting was related to lower educational attainment through a set of complex cascading processes that emphasised present-oriented behaviours at the cost of future-oriented educational goals," said lead author Rochelle F. Hentges from the University of Pittsburgh in Pennsylvania.

Students in the study were followed over the course of nine years, beginning in seventh grade and ending three years after high school graduation.

Hentges says kids whose needs have not been met by their parents may choose to engage in such behaviors as a way of seeking validation from their peers. Children who rely heavily on their peer group for support may feel that there’s nothing wrong with breaking rules to keep friends.

"This may include turning to peers in unhealthy ways, which may lead to increased aggression and delinquency, as well as early sexual behavior at the expense of long-term goals such as education," she said.

Although the study found an association between harsh parenting and poor classroom performance, it didn't prove a cause-and-effect relationship. Still, the authors say interventions could help to improve the educational attainment of students raised by harsh parents.

Possible interventions could include programs that offer education and help in relation to sexual behavior, delinquency, and unhealthy relationships with peers. Adolescents raised by harsh parents may also benefit from teaching techniques that focus on hands-on learning or group activities, the researchers suggested.

Findings from the study were published recently in the journal Child Development.