Popular food and nutrition writer Michael Pollan says it all in a few words: “Eat food. Not too much. Mostly plants.”

The United States Department of Agriculture (USDA), on the other hand, goes on at great length to say pretty much the same thing in its latest set of dietary recommendations, the first it has issued since 2011.

Basically, the USDA would like to nudge everyone towards the so-called Mediterranean diet, which emphasizes consumption of fruits and vegetables, nuts, and legumes and such vegetable fat sources as olive, nut, canola, and soybean oils.

The new guidelines are a little more permissive than some would like, basically giving the go-ahead to eat eggs and other cholesterol-rich foods in moderation. On the other hand, they recommend limiting sugar and saturated fat each to 10% of daily caloric intake. 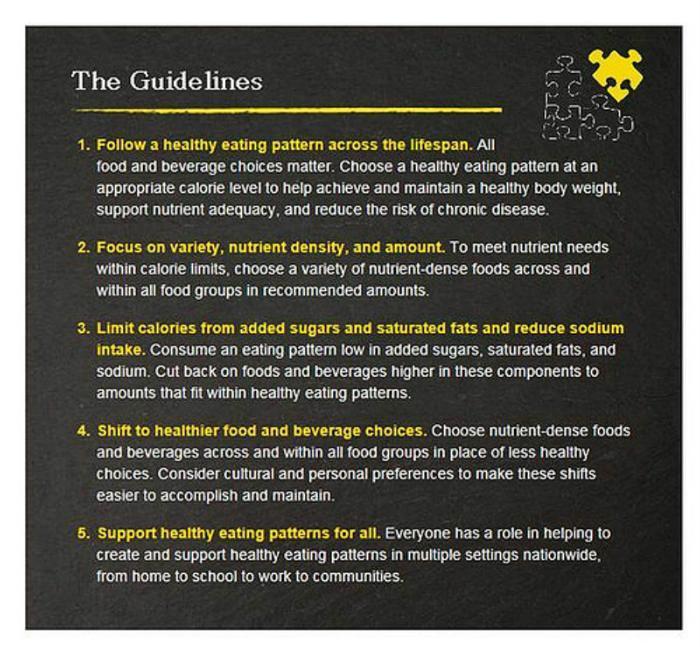 The guidelines note that there is strong evidence that diets with less meat are associated with reduced risk of heart disease and stroke. Moderate evidence indicates that those eating patterns are associated with a reduced risk of obesity, type 2 diabetes, and some types of cancer. Teen boys and adult men also “need to reduce overall intake of protein foods by decreasing intakes of meats, poultry, and eggs and increasing amounts of vegetables or other underconsumed food groups,” according to the guidelines.

“The advice presented in the 2015 Dietary Guidelines for Americans is sound, sensible, and science-based,” said Michael F. Jacobson, president of the nonprofit Center for Science in the Public Interest. “If Americans ate according to that advice, it would be a huge win for the public’s health."

Not everyone is pleased, however. The Environmental Working Group issued a statement claiming the guidelines don't go far enough in urging Americans to reduce their meat intake.

"The new 2015 Dietary Guidelines should have clearly called on consumers to eat less meat – both to protect their health and to reduce the harm that meat production does to the environment. Producing meat is a major source of greenhouse gas emissions, and growing the feed for livestock is a leading cause of farm runoff that pollutes our drinking water.

The Dietary Guidelines also fail to detail the risk of mercury exposure from canned tuna, a major health risk especially for children and pregnant women."

A physicians' group took even greater umbrage, filing suit against the USDA and the Department of Health and Human Services.

The Physicians Committee for Responsible Medicine charged that the egg industry influenced the USDA's advice that eating eggs is all right as long as it's done moderately.

It said as many as four of 14 experts on an outside panel that made recommendations to the USDA came from institutions that receive generous bequests from the egg industry.

The American College of Cardiology didn't go that far, but nevertheless made it clear that eating more meat, eggs and other cholesterol-laden foods is not a great idea.

"People do not need to obtain cholesterol through diet and should eat as little as possible," said Dr. Kim Allan Williams, president of the cardiologists' professional association.

So far there's little controversy about one of the USDA's revised recommendations, giving the go-ahead for healthy individuals to drink up to five cups of coffee a day.