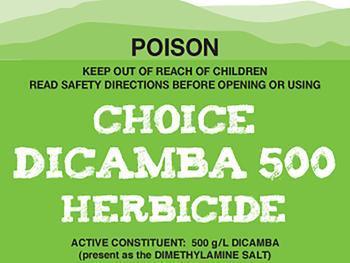 An Environmental Protection Agency spokesman says that the agency is now “very concerned” about dicamba, an agricultural chemical that regulators had previously claimed was “safe for everyone” shortly before giving Monsanto and competitors the greenlight to sell dicamba-based weedkillers late last year.

“EPA is very concerned about the recent reports of crop damage related to the use of dicamba in Missouri, Arkansas and other states,” an EPA spokesman tells ConsumerAffairs via email.

Even before the  EPA allowed the agrochemical industry to sell its potent new class of herbicide sprays, Texas grape growers and Missouri peach farmers complained that dicamba has a tendency to “drift” from its intended target. The farmers said that their own crops were destroyed after their neighbors used dicamba. Their complaints were backed by reports from food scientists and environmental advocacy groups, who also said that the chemical could pose health concerns.

But the EPA assured the public dicamba is safe and said that the problematic incidents came from farmers who used illegal, unapproved versions of dicamba sprays. The agency had allowed Monsanto to sell soybean and cotton seeds that are tolerant to dicamba over a year before Monsanto’s accompanying dicamba spray was available.

Even safe for infants

“When used according to label directions, dicamba is safe for everyone, including infants, the developing fetus, the elderly and more highly exposed groups such as agricultural workers,” the EPA wrote in a November 2016 post. “It also meets the safety standard for the environment, including endangered species.”

In the past year, Southern states have seen a surge in complaints from farmers who say that the industrial chemical is invading their land. The EPA promises to look into it. “We are reviewing the current use restrictions on the labels for these dicamba formulations in light of the incidents that have been reported this year,” the EPA spokesman adds to ConsumerAffairs. “The underlying causes of the various damage incidents are not yet clear, but EPA is reviewing the available information carefully. We will rely on the best information available to inform our assessment.”

Agrochemical companies Monsanto, Dow, DuPont and BASF market their dicamba-based weedkillers as an upgrade of sorts to glyphosate, which remains the most heavily used agricultural chemical in the world.

That distinction didn’t happen by accident. Glyphosate-based weedkillers like Monsanto’s Roundup Ready spray are sold in conjunction with soybeans and cotton seeds that are genetically modified to survive glyphosate, allowing farmers to spray the weedkiller en masse across their fields.

But a new breed of superweeds, evolved to survive glyphosate spraying, has emerged on farms as a result, creating a massive and expensive headache for workers. In response, Monsanto several years ago introduced soybean and cotton seeds that are genetically modified to withstand both glyphosate and dicamba, an older, more volative chemical that had been phased out years ago in favor of the former.

Without an accompanying dicamba-based spray on the market, farmers who purchased Monsanto's new seeds instead turned to illegal, older variations of dicamba sprays to kill weeds, critics later charged.

The industry and the federal government publicly told farmers that following instructions on the product label would ensure that nobody’s neighbor would be afflicted with unwanted dicamba drift. "We have not seen any kind of issues at all about off-target drift. We've been following the label, to the tee, and we haven't seen any kind of issues,” a grower named James Wray is quoted as saying in promotional materials for BASF.

But farmers across the United States farm belt who do not use dicamba-tolerant seeds are reporting that the volatile spray is traveling from other fields and killing their own crops. “...not every farmer chose to plant DT [dicamba-tolerant] fields,” BASF later acknowledged.  “And, they shouldn’t be forced into any new technology. It’s their farm.”

University of Missouri plant scientist Dr. Kevin Bradley reports getting calls daily from soybean farmers, homeowners and vegetable producers about the agricultural menace. Using public records, Bradley in July found that states have launched a total of 1,411 dicamba-related investigations this year. By his estimates, approximately 2.5 million acres of farmland across the United States have been damaged due to dicamba.

Much of the damage is concentrated in Arkansas and Missouri. Arkansas officials had already imposed restrictions on dicamba use, but last month the state’s plant board opted to ban dicamba outright, at least for the following 120 days. Arkansas Governor Asa Hutchinson supported the ban, saying that the “volume of complaints justify emergency action.”

Missouri followed suit last month, with Missouri’s Director of Agriculture explaining that “feedback and research” inspired the decision. Tennessee officials announced shortly after they they would restrict dicamba use, and Kansas officials say they are investigating the issue.

But for now, the Kansas Department of Agriculture is taking a stance similar to that of the agriculture industry and the federal government, that the problem is not with dicamba itself, but with off-label use of dicamba.

“KDA strongly encourages all users of herbicides, including products containing dicamba,” the agency writes, “to be attentive to label requirements when selecting and applying products (not all dicamba products are labeled for soybean application), to be aware of vegetation on surrounding properties, and to be vigilant of weather conditions.”

Separate of complaints to state agencies, a group of Arkansas farmers in June filed a class-action lawsuit against Monsanto, BASF and DuPont over dicamba drift. Unlike the lawsuits filed by environmental groups over the issue, the Arkansas farmers say that they are not opposed to pesticide-intensive agriculture as a whole.

“This is not an anti-GMO lawsuit,” the farmers write. Their case instead centers on the decision of Monsanto to begin selling dicamba-resistant seeds, which the company marketed as XtendFlex, before the company’s dicamba spray had been approved.

“Monsanto’s ‘plan’ to prevent drift and volatilization damage to non-target crops and plants was...simply to publicly tell XtendFlex purchasers not to use dicamba,” the plaintiffs say in court papers.

Environmental and food safety groups contend in lawsuits against the federal government that dicamba is unsafe even in its approved forms.

Monsanto addressed the controversy on August 2 in “An Open Letter to Our Farmer-Customers.”

Fraley claims that “the overwhelming majority of farmers are experiencing tremendous success during this first year of commercial launch.”

“However, we have also heard reports that some farmers are noticing signs of leaf cupping in nearby soybean fields, which could be attributable to dicamba,” he goes on.

Fraley says that the company is addressing the reports of “potential crop injury” by deploying its own scientists to study the issue and sending company representatives out to educate farmers about proper use of dicamba. Fraley also urges farmers experiencing dicamba damage to call a company hotline.

BASF similarly tells angry customers or those affected by dicamba to contact company representatives, rather than, say, a government investigator. “We encourage farmers to work together and reach out to our field staff to address any issues they are seeing in their fields,” BASF writes in a recent post addressing dicamba drift. “We pledge our ongoing support.”