Family speaks out about being tossed from Delta flight 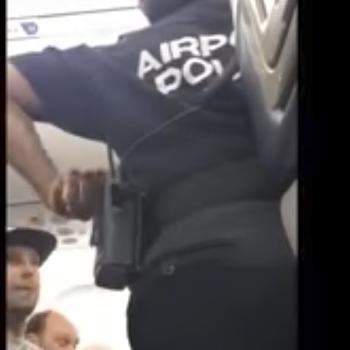 During the same week that airline executives appeared before Congress to endure lectures about the state of their customer service, a family has come forward saying it was thrown off a Delta flight for refusing to give up one of the seats they had purchased.

The incident, recorded on video as most are now days, occurred April 23, two weeks after a Kentucky physician was dragged off a United Airlines flight in Chicago. The family only came forward with its story this week.

Brian and Brittany Schear, of Huntington Beach, Calif., were returning home after a vacation in Hawaii. Initially, the couple said, they purchased tickets for themselves and their teenage son, and planned to hold their young children, ages one and two, on their laps on the long flight.

Before departure, the couple told NBC News, they purchased a ticket on another flight for their oldest son and planned to use the third seat for their two-year-old. The Schears said they gave that information to the Delta gate attendant, who told them it would be okay.

But the flight was oversold. Once the Schears were aboard, an airline official told them the Delta was reclaiming the third seat the Schears had purchased. A lengthy argument ensued, with the Schears threatened with arrest if they did not comply. When they refused they were removed from the flight. It was late at night and the Schears said they were left to find their own hotel and purchase new tickets to get home. The video of the encounter is below:

Technically, Delta might have had the right to reclaim the seat since the person to whom the ticket was initially issued (the Schears' teen-aged son) failed to show up. The Shears said they paid for it and had someone else that could use it and didn't understand why it was being taken away from them.

But being technically correct may not be enough in this day and age, especially as anger at airlines seems to be building. Delta issued a statement saying the company is sorry for "the unfortunate experience our customers had with Delta." The airline said it plans to refund the family's travel and provide "additional compensation."

The Schears were especially upset because they say a Delta gate attendant told them their two-year-old son could sit in the unused seat. But when it became apparent the flight was overbooked, Delta enforced the letter of its policy, which required the person to whom the ticket was issued sit in the seat.

Since United found itself in an uncomfortable spotlight last month, it's apparent that these types of things are not all that uncommon. Now, however, when they happen we'll all going to hear about it.

United has announced a number of policy changes in the wake of the dragging incident that it hopes will improve customer service. One provision gives airline personnel on the ground the power to make decisions "in the moment" if they will improve the customer experience.

At a time when airlines are selling every seat on a plane, and then some, that might not be a bad idea for United's competitors to consider too.