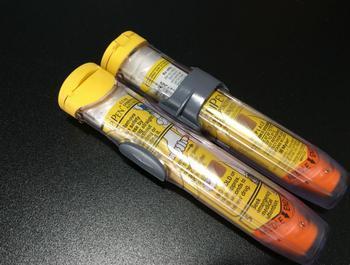 “This suit is about taking a stand for Americans who suffer life-threatening conditions,” Dallas lawyer Warren T. Burns said. “We intend to send a message to Mylan and other companies that preying on the weak and the sick is no longer an accepted method of padding their bottom line.”

Mylan, the U.S. distributor of EpiPens, was vilified last year after raising the price of its life-saving product from $100 in 2008 to more than $600 by 2016. EpiPens offer a life-saving dose of epinephrine (adrenaline) to children and adults suffering acute allergic reactions. Congress and federal agencies have since opened investigations into EpiPen pricing.

The lawsuit argues that Mylan also used patent lawsuits and administrative actions to delay the entry of competitors that might have undercut its prices. The plaintiffs claim those actions violate state antitrust and consumer protection laws, as well as the federal RICO racketeering statute.

“What we are seeing is a fraudulent scheme designed to maintain high corporate profits,” Burns said. “At the same time it was raking in cash, Mylan was forcing American children and adults to choose between purchasing an overpriced drug or risking death. This just can’t be how business is conducted in America.”

Mylan and other defendants have filed a motion to dismiss the plaintiffs’ suit. Burns expects the court to decide on that motion by July, potentially leading to discovery this summer into Mylan’s secret pricing practices and decisions.

“This is an important case for all Americans,” Burns said. “This is a test case for whether Americans can put effective stops on runaway drug pricing.”