Passengers who use wheelchairs have long described intolerable conditions on flights 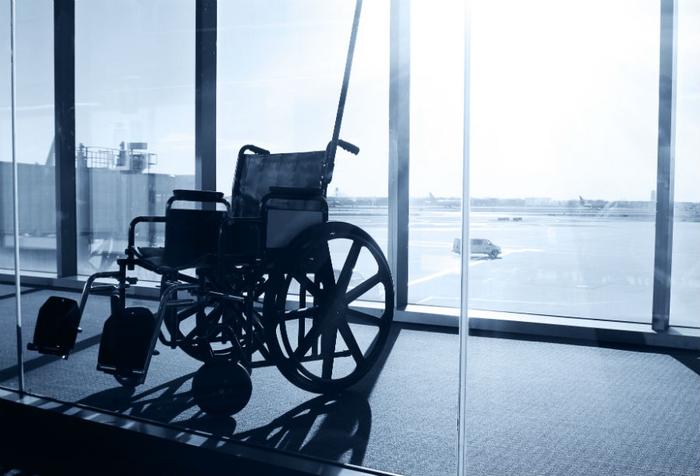 Delta Air Lines, facing accusations that employees tied a woman with multiple sclerosis (MS) to a wheelchair, is apologizing for the “perception” that customers have of its service.

Maria Saliagas and her husband travel from their home in Atlanta to Europe every year and had no plans of stopping, even after she was diagnosed with MS five years ago.

When they arrived in Amsterdam for this year’s trip on April 1 , Delta employees could not find a wheelchair equipped with straps to support her back.  So the employees instead placed her in chair with inadequate back support and used a dirty blanket to secure her, according to an account her son gave.

“The Delta employee thought it would be appropriate to tie my mother with someone else's dirty blanket, in such a way it has left bruise marks on her arms,” Nathan Saliagas wrote in a Facebook post. “When she started crying, she was told to 'shut the [expletive] up' or she will be 'left there.'”

After his account was reported by the local news. Delta issued a statement that hedged somewhere between an apology and a defense.

“We regret the perception our service has left on these customers. We have reached out to them, not only to resolve their concerns, but also ensure that their return flight exceeds expectations,” says a statement that a Delta representative sent WSB-TV.

The couple is scheduled to return to Atlanta on April 30.

People who use wheelchairs have long described intolerable conditions while flying, and they say that the situation has worsened as seating gets tighter than ever. Reporting from the Government Accountability Office has found that complaints from disabled air travelers more than doubled between 2005 and 2015.

Airlines are exempt from the American Disabilities Act and have resisted calls to make planes more friendly for the disabled, claiming such upgrades could cost billions of dollars.

Passengers are typically barred from bringing their own wheelchairs on airplanes. Instead they must depend on temporary wheelchairs issued by airline staff for help boarding and getting off the flight.

While airlines are required to publicly report lost luggage, delayed flights, or animals that were killed or injured in their care, the same does not apply to wheelchairs. That was scheduled to change this year, until Trump took office.

After five years of public debate, the Obama administration finalized a rule that would have required airlines to publicly report damaged or lost wheelchairs. But several months before the rule was scheduled to go in effect in January 2018, the Trump administration delayed its implementation for another year, sparking a lawsuit from the  Paralyzed Veterans of America.