Danger: popping a Champagne cork is no joke 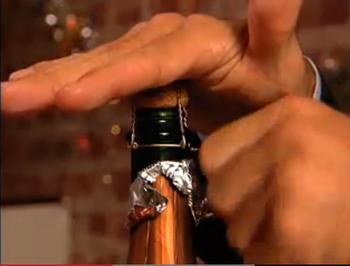 It's been a staple of Hollywood comedies for decades; the misguided popping Champagne cork that hits another object or person. A sight gag almost guaranteed to bring a laugh.

But it's no joke, according to the American Academy of Ophthalmology, which warns Champagne bottles contain pressure as high as 90 pounds per square inch. As a point of reference, that's more than the pressure found inside a typical car tire.

That kind of pressure can launch a cork at speeds approaching 50 miles per hour as it leaves the bottle; fast enough to shatter glass and, unfortunately, also fast enough to permanently damage vision.

No time to react

“When a Champagne cork flies, you really have no time to react and protect your delicate eyes,” said Dr. Monica L. Monica, an ophthalmologist and spokeswoman for the American Academy of Ophthalmology. “Uncontrolled Champagne corks can lead to painful eye injuries and devastating vision loss. We don’t want anyone to end up ringing in the year on an ophthalmologist’s surgery table.”

"Usually we see this type of injury around New Year's. In fact, it is a very common injury," said Dr. Peter Kaiser, an ophthalmologist at the Cleveland Clinic Foundation, told ABC News in 2006. "The worst was a patient whose eye wall ruptured from the force of the cork, and the outside of the eyeball had to be stitched closed."

Despite what you might read on the Internet, there hasn't been a case of someone killed by a flying cork. Still, they do damage enough.

Flying corks are most dangerous when the sparkling wine inside the bottle is warm. When it is properly chilled, there is less pressure. For safe cork removal, always chill sparkling wine and champagne to 45 degrees Fahrenheit or colder before opening.

Also, don't shake the bottle. That's like waving a red cape at a bull. Shaking increases the speed at which the cork leaves the bottle thereby increasing your chances of severe eye injury.

When removing the cork, point the bottle at a 45-degree angle away from yourself and any bystanders and hold down the cork with the palm of your hand while removing the wire hood on the bottle.

It's also a good idea to put a towel over the entire top of the bottle and grasp the cork. Twist the bottle while holding the cork at a 45 degree angle to break the seal. Counter the force of the cork using downward pressure as the cork breaks free from the bottle.

As part of French tradition, a sabre can be used to open a Champagne bottle with great ceremony. This isn't advised for your holiday party.

To learn the proper technique for opening a bottle, check the video below.